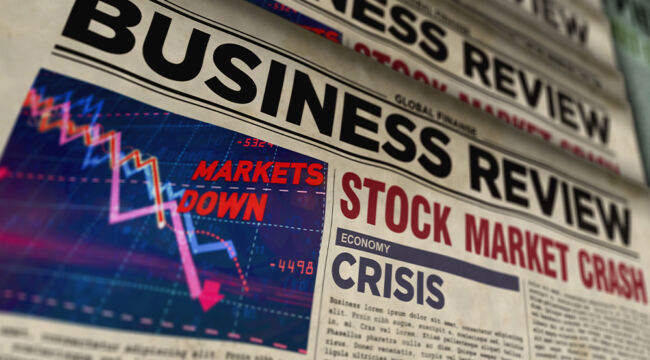 THIS Will Crash the Market

Today we are atop our main mast. We are facing the horizon, spyglass in hand. What do we see?

Heavy weather. And it is barreling towards Wall Street.

Drenching rains today, with local flooding in the technology sector.

U.S. stocks fell Wednesday as investors eyed more Western sanctions against Russia and digested hawkish remarks from key monetary policymakers. These suggested that more members of the Federal Reserve were open to moving aggressively to raise interest rates and bring down demand and persistently elevated levels of inflation.

It’s Not the Sanctions

We do not believe the prospect of additional anti-Russia sanctions pushed the weather in today. The harshest have already been declared… and the market has “discounted” them.

It is rather the “hawkish remarks from key monetary policymakers” that opened the skies today — and the umbrellas.

This afternoon the Federal Reserve issued the minutes from its March confabulation. These minutes revealed that members “generally agreed” the balance sheet should undergo monthly reductions of $95 billion each.

The winnowing will likely commence next month.

The March minutes also indicated that the Federal Reserve may leap 50 basis points in future meetings — a panicked doubling of its customary 25.

Yes, the Federal Reserve is taking to the warpath. It is out to scotch inflation. Belatedly and inadequately of course… yet it is clearing for action.

[The minutes were] a warning to anyone who thinks that the Fed is going to be more dovish in their fight against inflation. Their message is, “You’re wrong”… The Fed orchestrated a concerted effort to warn the market, telling the market in no uncertain terms that this is serious, this is paramount, we are going to fight inflation.

Just so. Yet at what price? At the price of recession, quite likely. Deutsche Bank economists hazard the United States economy will contract by year’s end.

We will not tie up to a specific date. Yet we are confident in the overall forecast.

Here is our own forecast for the stock market in particular, as promised above: vicious weather.

The barometer is plunging, the winds are gusting, the skies are dimming. The animals are hunting shelter. What is the source of the gloom?

Buybacks by corporate clients slowed to their lowest weekly level in 12 months and on a rolling four-week average basis are down year over year for the first time since late 2020.

Stock buybacks accounted for much of the stock market’s lovely run since 2009.

With this debt they often purchased their own stock… which reduced shares outstanding… and raised the price per share.

That is, corporations often took on debt to finance financial sorcery.

Days of Wine and Roses Are Over

Corporations suspended buybacks during the hell days of the pandemic. But buybacks returned… at a furious and delirious pace.

Corporations repurchased $882 billion of stocks last year — a record. Is it then a wonder that the stock market likewise attained record heights last year?

But last year is not this year.

And the direction of travel is north.

Millstones Around the Neck

The cheap debt corporations took on to finance buybacks is no longer as cheap. Rising rates hang heavier debts upon them… millstones upon their necks.

These corporations can no longer afford stock buybacks that levitate their stock prices.

Who will take up their slack? Who will purchase their stocks? The beleaguered retail investor whose income inflation has rendered far less “discretionary”?

With the Fed on deck to start tightening policy… there is a significant risk that buybacks will slow. Such was the case when the issuance of cheap debt provided the funding for many of these repurchases…

Importantly, companies that performed uneconomic buybacks will find themselves with financial losses, more debt and fewer opportunities to grow in the future.

The most considerable risk for investors betting on higher stock prices isn’t the Fed. Instead, it is the reversal of “stock buybacks.”

How much liquidity will come draining out once the Federal Reserve punctures the balance sheet?

Mr. Joseph Wang was a trader on the Federal Reserve’s open market desk that inflates and deflates the balance sheet. From whom:

Chair Powell has sketched out the contours of the upcoming QT program through a series of appearances. He noted at a recent congressional hearing that it may take around three years to normalize the Fed’s $9 trillion balance sheet. The Fed estimates its “normalized” balance sheet based on its perception of the banking system’s demand for reserves. A conservative estimate based on the pre-pandemic Fed balance sheet size, and taking into account growth in nominal GDP and currency, arrives at a normalized balance sheet of around $6 trillion. This would imply QT at a rate of around $1 trillion a year, roughly twice the annual pace of the prior QT.

Is the Federal Reserve prepared to funnel out $1 trillion per year? Is it determined to drain today’s $9 trillion balance sheet… to $6 trillion?

We are far from convinced the Federal Reserve will do either. It will likely announce a halt long before the business is done.

Ensuring an Even Larger Storm

Yet only after our forecast comes to fruition, after violent storms have rolled through Wall Street.

He will not allow the market to repair the wreckage. He will instead proceed with his rescue operation of rate cuts and quantitative easing… reinflating bubbles…

Thus ensuring an even greater storm to come…