This American Icon Could Trigger Next Crash

Are we verging on another “Bear Stearns” moment?

That is, is the canary in the coal mine of the next crisis ready to keel over?

Today we don our mining gear… descend into the dark, doomy shaft… and report worrisome findings.

First we throw a penetrating beam of light down another deep black hole — today’s stock market.

Details tomorrow — depend on it.

Bear Stearns entered this world in 1923. It withstood the mighty gale of ’29 six years later.

But it could not endure the subprime mortgage crisis of 2007–08.

Bear Stearns had hitched its fortunes to the housing boom… like a gold miner ties its future to one primary mine.

But in September 2006 the first traces of carbon monoxide came seeping in, when housing prices began giving way.

The thing finally went over in March, dead… the first fatality of the financial crisis.

This colossus of American manufacturing breathed its first in 1892.

As recently as 2001, it was the most valuable company in all of existence.

But in the decade or so prior, the manufacturing behemoth took a bad turn…

The grimy toil of the factory floor was for suckers, it decided.

It put aside its overalls and its lunch bucket… bought Armani suits, slicked its hair, began munching sushi… and headed for Wall Street.

It went chasing after the fast buck — and the easy buck.

It became more bank than manufacturer.

The getting was good… until it wasn’t. The 2008 crisis nearly cleaned it out.

It has gone on one leg ever since. And the limp has worsened over the last year.

Its stock has plunged over 50% this past year alone.

Of what fallen American giant do we write?

None other than General Electric.

The company whose bulbs lit the world and whose jet engines conquered the aerial ways, the company that survived the Great Depression, the 2001 collapse and the 2008 meltdown… is in a bad way.

Were you aware GE presently seeks to divest itself of the very lightbulb business Mr. Edison created?

“When many people think of GE, they think of America,” says John Inch, a Deutsche Bank analyst who covers GE.

“It’s hard for them to understand how this thing fell apart so quickly,” he adds.

Like much of corporate America, GE took aboard heaps of cheap debt after 2008 — it presently groans and sags under $115 billion of it.

In all, U.S. corporate debt swelled a preposterous $2.5 trillion post-financial crisis — some 40% higher than its 2008 summit.

Analyst Jesse Colombo informs us that total corporate debt presently exceeds 45% of GDP. Only during the housing bubble did it scale such dizzied heights: 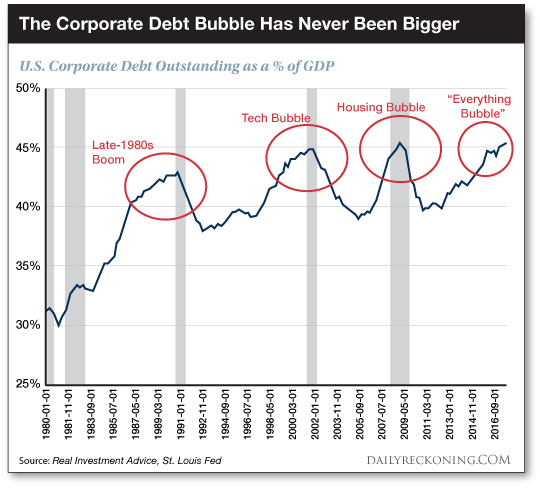 All was peace as long as interest rates held low.

Corporations could put cheap debt to the service of stock buybacks — a principal source of helium that inflated the bubble to recent heights.

But interest rates are on the rise. That is, debt is more expensive to bear.

And rates have reached the point where they begin to drag… like sandbags weighing down a hot air balloon.

And so we return to our canary gasping for oxygen in its toxic mine:

As The Wall Street Journal explains:

“GE has so much debt that it would become about one-tenth of the $1.2 trillion [junk bond] market, according to data from Fitch Ratings.”

In conclusion, we return to Colombo:

GE’s terrifying recent credit meltdown may be the initial pinprick for the corporate debt bubble, but make no mistake — it is not an isolated incident. GE may be the equivalent to Bear Stearns in 2007 and 2008 — just one of the first of many casualties.

Exactly how many is the question.

And so a titan of good old fashioned American capitalism is reduced to junk.

What can be more symbolic?