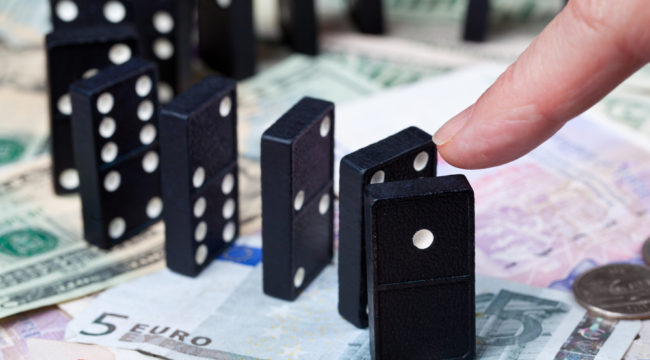 Think Brexit's Over? It's Not

Talk to the average Joe on the street and he’ll tell you the world is coming undone… And he’s right.

If stock markets were not at nominal all-time highs, everyone would believe that events are spiraling out of control.

Yet even with stocks at highs, people know there’s something terribly wrong… and they can’t seem to put their finger on why it’s happening and what it all means. The market tanked after Brexit, but it was hitting all-time highs again shortly after. What gives?

Brexit was the signal that the global financial system is a toxic cesspool. But here’s the thing: It might not be the catalyst to send the global economy into a tailspin. That catalyst is going to be France’s exit from the EU, or “Frexit.”

After the recent terrorist attack in Nice, the odds of Frexit jumped higher in Las Vegas. France is being torn apart by the EU’s open borders immigration policy. And France is on the verge of a civil war over it. The EU might survive Brexit. But it won’t survive Frexit. And neither will the global financial system.

But that’s not all…

While Brexit stole the headlines and Frexit remains a legitimate possibility, a dangerous banking crisis is already on the verge of tearing Europe apart. In fact, it could even lead to the start of the next financial crisis. The current banking crisis in Europe already has the potential to upend the global economy. And things are starting to heat up…

The problem’s epicenter is Italian banks. Italy’s banks are broke. Many are insolvent. They’re sitting on $400 billion in bad loans. That makes up more than 18% of the country’s loans. In comparison, Britain’s bad loans only make up 1.5% of total loans. And there’s no easy way out. The crisis is spreading to the wider Italian economy. And Italy’s the third-largest economy in the eurozone.

Italian politicians are being pressured to take action. The problem is their desired solutions most likely mean the end of the EU’s banking union… and the entire European project. A taxpayer bailout would put Italy on a collision course with Eurocrats in Brussels and would threaten the EU’s very existence. EU rules state that bank investors must pay up before the banks can be bailed out.

This drama pits taxpayers versus banksters versus hapless bureaucrats. And the big European banks with exposure want Italian taxpayers to make them whole.

Who will win this showdown? And then what? What are the next dominos to fall?

I traveled to Singapore recently for an important conversation with one of the most legendary investors in the world, Jim Rogers. Rogers has seen it all and done it all. His perspective on history and global finance is unmatched. That’s why I ventured to see him for his take on the great global unraveling taking place right before our eyes.