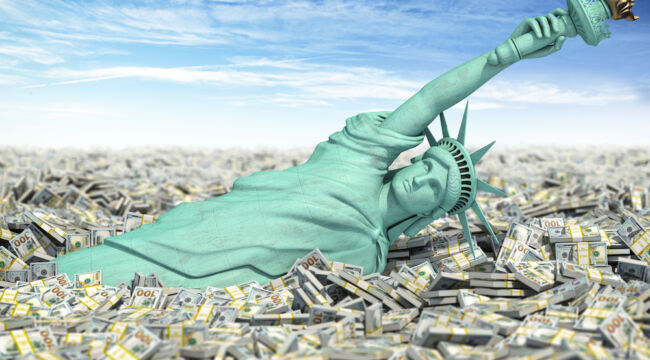 Today we enter into the revolutionary spirit of the times… topple idols… and haul down statues.

We will be declared subversive. We will be denounced as vandalous. The establishment will yell blue murder and demand our immediate arrest.

Yet justice is with us.

For we bring low the authors of destruction, of human inequality, of wickedness itself.

Which icons, which statues come crashing down today?

You will have your answer shortly. First to the site of a famously iconic statue — the statue of a fearsome bull…

Faces were taut on Wall Street today… and nerves in tatters.

An uprising of the coronavirus is the evident cause. It presently lays siege to the Sunshine State. Explains CNBC:

To Florida we must add fresh insurrections in California, Arizona, Texas and others.

“We’re going to eclipse the totals in April, so we’ll eclipse 37,000 diagnosed infections a day.”

That is the warning of former Food and Drug Administration Commissioner Dr. Scott Gottlieb.

And so the stock market took a severe fright today…

And so the V-shaped recovery goes on ice.

But the stock market is not our central concern today. For a mad passion seizes us… and we are hot for mischief.

Before we shatter icons, before we pull down statues… let us identify the source of our heat…

Low rates, meantime, coax bashful dollars out of wallets… and into consumer goods.

Why save money — after all — if it merely rots down in your wallet?

And consumer spending is the engine of inflation. There must be inflation, we are told.

Without inflation we risk deflation. And deflation is the great bugaboo of economics.

Under deflation, consumers cling to their cash in anticipation of lower prices tomorrow.

Before long the entire economy is trapped in the vortex of deflation… and the wolf of depression soon snarls at the door.

Central banks therefore pursue low interest rates — and a moderate dose of inflation — with a zeal verging upon mania.

But do their theories hold together?

It released a report bearing this title: “Stagnation, Stagflation or Elevation.” Here is the question it pursued:

The answer is yes, concedes the report — but only to a point. Below that point rates do not encourage spending. They encourage hoarding instead.

Low interest rates, meantime, do not yield inflation. They rather yield deflation.

What is that point of separation between spending and hoarding, between inflation and deflation?

Interest rates beneath 4% do not bring out more consumption. They store in more savings.

And rates beneath 4% do not yield inflation — but deflation.

And the lower rates slip beneath 4%, the more people save — and the less they spend.

We might remind you that rates presently stand scarcely above zero.

The iconoclasts of Zero Hedge in summary:

[Bank of America] shows that while lower rates indeed stimulate spending and lead to lower savings, this effect peaks at around 4% and then goes negative. In fact, the lower yields — and rates — drop below 4% — not to mention to 0% or below — the lower the propensity to spend and the higher the savings rate!…

And so the Federal Reserve is the snake devouring its tail, the man who shoots a hole in his foot, the goalkeep who rifles the ball into his own net.

That is, the Federal Reserve is its own saboteur.

It demonstrates without a shadow of doubt that hyper-easy monetary policy is not inflationary but is deflationary. Which is catastrophic for central banks, who publicly state that the only reason they are pursuing ultra easy monetary policy, which includes QE and negative rates, is not to goose the market higher (even though by now we all know that’s the real reason) but to stimulate inflation.

And the cycle it has begun is truly vicious:

This means that the lower (and more negative) central banks push rates, the lower (not higher) the spending, the higher (not lower) the savings rate, the lower the inflation, the higher the disinflation (or outright deflation), which in turn forces central banks to cut rates even more, to add QE, yield curve control, buy junk bonds, buy ETFs or pursue any of a host of other monetary policies that are even more devastating to consumer psychology, forcing even more savings, resulting in even more disinflation, causing even more intervention by central banks in what is without doubt the most diabolical feedback loop of modern monetary policy and economics.

Said otherwise, monetary easing is deflationary. Let that sink in.

We have let it sink in. And it penetrated clear through to the marrows.

And so today we are out to yank down the statues of those who have perpetuated “the most diabolical feedback loop of modern monetary policy and economics.”

The artificially low interest rates the Federal Reserve has chased — after all — inflated the stock market to dimensions grotesque and obscene.

But their economic sins are scarlet… and of the mortal category.

And so we come now to the bronze statue of Alan Greenspan, stately, regal, august…

Down Comes “The Maestro”

“The Maestro” is chiseled into its pedestal.

At once we seize our canister of spray paint… and graffiti “Traitor” over the inscription.

That is because Mr. Greenspan once exalted the gold standard and the golden handcuffs it placed upon central bankers.

Yet when he directed the central bank of the United States, he slipped the cuffs…

He tinkered interest rates downward against his own earlier advice.

He engineered two manias — the technology mania and the housing mania — earning him the applause of Wall Street and title of Maestro.

Both of his creations came tearfully to grief.

And so we string a chain around Mr. Greenspan’s cold metal wrist, hitch the other end to our bumper… and flatten the accelerator.

Down he comes with a mighty and rapturous thud.

“Helicopter Ben” Is Next

Next we come to “Helicopter” Ben Bernanke. This fellow’s pedestal bears the dedication: “The Courage to Act.”

We reach once again for our spray can. We improve the inscription with “Coward.”

Mr. Bernanke could have allowed the profound imbalances within the financial system to correct — as they would have under honest capitalism.

A newer, healthier economy… erected on surer footings… would have risen upon the wreckage of the old.

Yet Mr. Bernanke lacked the courage to let the free market take its natural course.

He instead pummeled rates to zero, devised quantitative easing… and inflated the greatest stock bubble market in history.

For his crimes against economics, his statue too comes crashing down today.

Now, what is this? A rare statue of a female — Ms. Janet Yellen, next in line after Bernanke.

She is honored for being “The First Female Chairperson in the History of the Federal Reserve.”

This we cannot dispute. Yet she perpetuated Mr. Bernanke’s economic vandalism.

She did not believe another financial crisis would befall us “in our lifetimes,” she declared in retirement.

And so today we razz her prophecy, in red spray-paint upon her pedestal:

Yet we are highly gallant. We are therefore loath to rip down the statue of a woman. Yet we yield to an egalitarian impulse…

Mr. Jerome Powell is still on duty. His statue has therefore yet to be dedicated. That day will come of course.

He will be depicted upon a galloping horse, in the manner of Napoleon.

He will be credited with saving the United States economy at its darkest moment since the Great Depression.

And so we will be there with our spray paint, our chain… and our pickup truck…