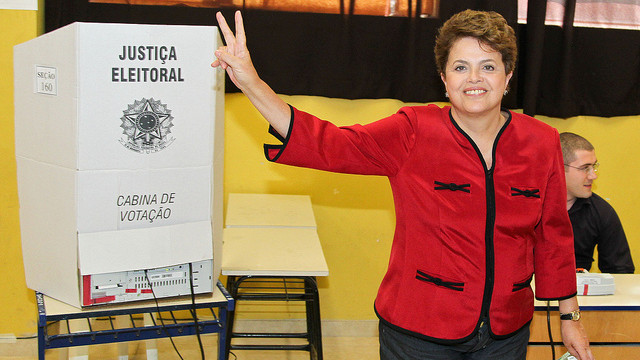 There is No Silver Lining for Brazil

Things once looked so promising for Petrobras, Brazil’s state-run mega-oil company. In July 2006, the discovery of a massive pre-salt layer, 300 kilometers off the coast had the potential to transform Brazil into a leading oil producer.

The notion of “oil autonomy” even played a prominent role in Brazil’s 2010 presidential campaign. That platform helped secure the presidency for Lula’s protégé, Dilma Rousseff, who was chairwoman of Petrobras’ board of directors from 2003 to 2010. Petrobras was destined to become the biggest oil company in the world.

Naturally, everyone wanted a piece of it. Multinational banks wanted to finance it. Speculators and pension fund managers bet on its success. Two years after the US financial crisis cratered the global banking system, this shining light in the energy sector provided mega banks new opportunity. Subprime mortgages had gone cold. Oil was hot.

On September 24, 2010, Petrobras raised 120.36 billion reais ($70 billion) in the largest share issue ever. Three of the Big Six US banks, Bank of America, Citigroup, and Morgan Stanley, while facing fraud suits in the US, were global book runners. Brazilian bank, Banco Bradesco lead the offering. Banco Itau was another global book runner.

Brazil’s Enron: The Unraveling of Petrobras: 2014

In the energy and finance sectors, the bigger they are, the more corruption at their core and the more financial crimes they’ve committed. Just as U.S. energy company Enron imploded in a haze of fraud in 2001, Petrobras followed suit.

They were convicted and later sentenced to 12 and eight years in prison respectively for having masterminded the web of corruption. They were also allegedly involved in money laundering operations for the PMDB (Brazilian Democratic Movement Party) and right wing PP (Progressive Party).

Costa’s role in the corruption was long-standing and international. In 2006, under his direction, a sketchy acquisition took place in the U.S. Petrobras purchased Houston, Texas-based refinery company, Pasadena, for $1.2 billion, about 30 times its worth.

On July 23, 2014, Brazil’s public-spending watchdog organization, Union Accounting Tribunal (TCU) determined that Petrobras had overpaid for Pasadena. The kicker? Dilma had approved the purchase while Minister of Energy and president of Petrobras’ board of directors. It was a decision that was either crooked or dumb, or both.

By early 2015, not only was Petrobras mired in scandal, but also its foreign investors were livid. Lawsuits for billions of dollars of losses were stacking up.

Certain American banks were not blameless. Though they will argue it in the courts, they helped inflate Petrobras’ debt burden without appropriate due-diligence and advised clients to invest in Petrobras. Just like with Enron: big banks helped the firm become the sham it was and shareholders paid the price.

The nine largest Petrobras’ American Depository Shares (ADS) holders claimed losses of more than $50 million each. Amongst claimants were U.S. pensions funds already engaged in suits against U.S. banks for subprime related fraud, such as the Ohio Public Employees Retirement fund. The Bill and Melinda Gates Foundation sued Petrobras. So did Pimco. The line is long and growing longer.

Petrobras firm owes about $135 billion in loans and bonds (some estimates are lower) to its international investors. China, Brazil’s largest trade partner came to its rescue last spring.

On April 1, 2015, Petrobras signed a $3.5 billion financing agreement from the China Development Bank as part of a broader oil cooperation agreement with China.

On June 1, 2015, Petrobras issued $2.5 billion worth of a 100-year “century” bond with an annual yield of 8.45%. Deutsche Bank and J.P. Morgan coordinated operations for the first century bond issued by a Latin American company since 1997. Foreign investor demand rendered the issue five times over-subscribed.

On June 3, 2015, two years after Bank of America called Petrobras the “most indebted company in the world,” Petrobras invited it to run a $5 billion asset sale.

All three of the major U.S. bank participants in the 2010 share issue bagged lucrative roles in Petrobras’ demise. Citigroup in the IPO spin-off, JPM Chase in the century bond issue and Bank of America in the assets sales.

The US-lead suit against Petrobras and its bankers will get hostile. On Oct. 6, 2015, they challenged the plaintiffs’ claims and tried to get the case dismissed. Judge Rakoff said “No.” The suit is set to go to trial this February 2016.

Petrobras has denied all allegations and claims to be the victim of a plot against it by contractors and corrupt politicians. On Oct. 20, 2015, a pro-government commission cleared Dilma of wrongdoings, but that ship remains in the harbor. Both Dilma and Lula could be called for testimony as the U.S. case unfolds.

The next day, Brazil’s antitrust authority, CADE, opened its own investigations into contract rigging associated with the 21 companies and 59 execs already under criminal probe.  On Jan. 11, 2016, 11 global and domestic banks fell under investigation, the snowflake that began in the oil sector inevitably spread to finance.

Petrobras’ problems will hamper Brazil on multiple levels beyond scandal and an estimated $30 billion in GDP losses. Due to ongoing investigations, Petrobras stopped payments to other firms, including rigging companies. That sent some into bankruptcy and others to the brink, a factor that will depress their share prices in 2016. Associated sectors remain imperiled, including Brazil’s steel, construction and banking sectors.

Dilma offered companies under Petrobras related investigations leniency in return for statements against their criminal practices. That bodes scary for Brazilian corruption.

Brazil’s pension funds are in crisis. Unemployment and inflation, over 10% for the first time in 12 years, are rising sharply, despite high interest rates. Brazilian Christmas retail sales fell 15% from a year earlier.

Carnaval begins this month and the Olympics this summer. While these events will bring a lot of people to Brazil, for Petrobras and Brazil, these spectacles won’t be enough to deter their 2016 economic meltdown.

It is impossible to see a silver lining in Brazil’s economy or the havoc that the ongoing Petrobras’ corruption and growing investigations will cause for now. You should avoid the company and Brazil as whole. It will get much uglier there before the sun peaks out.