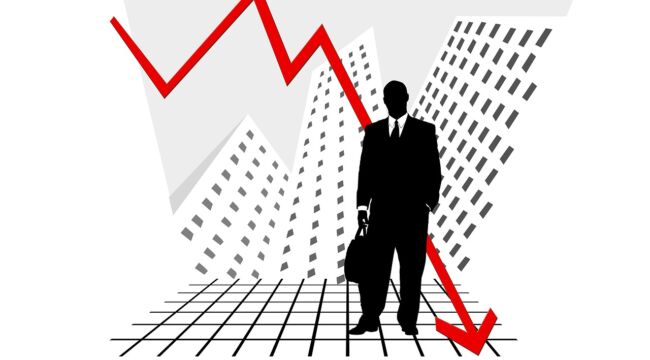 The Dow Jones careened another 1,164 stomach-wrenched points today — the fifth collapse of at least 800 points this year — and the greatest single-day plunge since 2020.

What accounts for today’s tumults? The consensus answer is inflation.

Poor earnings reports by retail behemoths Target and Walmart indicate inflation has consumers on the defense.

Straws in the Wind

Markets returned to heavy selling after two back-to-back quarterly reports from Target and Walmart stoked investor fears of rising inflation. It’s the fifth Dow decline of more than 800 points this year, which all occurred as the stock sell-off intensified within the last one month, according to FactSet data.

Any company that relies on households and discretionary purchases will likely suffer this quarter because a lot of discretionary income has been funneled to food and energy prices.

We are not one whit surprised.

The official inflation rate goes at 8.3%.

Who can fault the consumer for pulling in his oars… and pinching his devalued pennies?

The dramatic growth in the U.S. money supply… that began in March 2020 will do what increases in the money supply always do. Money growth will lead in the first instance (one–nine months) to asset price inflation. Then, a second stage will set in. Over a six–18-month period after a monetary injection occurs, economic activity will pick up. Ultimately, the prices of goods and services will increase. That usually takes between 12 and 24 months after the original monetary injection.

Within 24 months of the March 2020 unleashing — on schedule — we were treated to the inflationary deluges presently washing over us.

Americans Are out of Savings

We have held a deep distrust of reports claiming the American consumer is flush.

For instance, of the recent New York Times article “For Tens of Millions of Americans, the Good Times Are Right Now.”

For instance, of the recent Investing.com article “S&P 500 in Rally Mode on Signs of Strong Consumer; Tech Reigns Supreme.”

Consumer credit went skyshooting in March, to $52.4 billion. That astounding figure easily doubled the projected $25 billion forecast. It is also the highest figure in recorded annals.

If Americans were to their ears in savings, would credit card debt run to record heights? The question is the answer.

Let us hazard an additional theory to account for the stock market’s recent tumults.

Stock buybacks accounted for much of the stock market’s lovely run since 2009.

With this debt they often purchased their own stock… which reduced shares outstanding… and raised the price per share.

Corporations suspended buybacks during the hell days of the pandemic. But buybacks returned last year at a furious and delirious pace.

Corporations repurchased $882 billion of stocks last year — a record. Is it then a wonder that the stock market likewise attained record heights last year?

But last year is not this year. Stock buybacks (and dividend payouts) wallow at 12-year lows, claims Bank of America.

Is it coincidence that the stock market is reeling this year?

Ten-year Treasury yields presently run to 2.88% — down from their recent perch above 3% — yet the highest in three years nonetheless.

Millstones Around the Neck

Thus the cheap debt corporations took on to finance buybacks is no longer so cheap. Rising rates hang heavier debts upon them… millstones upon their necks.

These corporations can no longer afford stock buybacks that levitate their stock prices. Who will take up their slack?

The answer is very, very far from clear.

Our own Charles Hugh Smith appears prescient. In early January he divined that 2022 represented “the year of breakdown”:

If we look at the fragility and instability of essential systems, it’s clear that 2022 will be the year of breakdown.

The year is but five months into the 12, it is true. Yet indications to date lean heavily toward Charles.

The Nasdaq Composite is already sunk in a bear market. Both the Dow Jones and S&P have suffered “correction” — a tumbling of 10% or more from recent peaks.

How Come Stocks Only “Correct” Lower?

As we have observed before: Stocks are never said to “correct” higher. Only lower. That is, corrections run in one direction only — down.

But why? Is not an undervalued market by definition… incorrect?

Then should not an accurate reappraisal — a rising market — represent a correction?

But in the popular imagination it does not. Corrections only correct downward.

Here is our theory…

Getting Away With Something

The term is a subconscious recognition of the market’s tendency to overexcitement, of its constant efforts to slip its leash…

Of the animal spirits’ chronic ambition to go amok.

When the market rampages, a fellow is dizzied by the thrill of it. And so he lets go. He lets his throttle out.

But he is besieged by an inner suspicion. A suspicion, that is, that he is getting away with something…

It is as if his employer has mistakenly added a zero to his paycheck. Or that he has come into possession of stolen property. Or that the mailman has left the neighbor’s package at his door.

He knows he must hand it back.

And so comes the correction — the inevitable correction. He knows he must hand it back.

He is presently handing it back and then some more.

Thus conclude our brief reflections on the word correction.