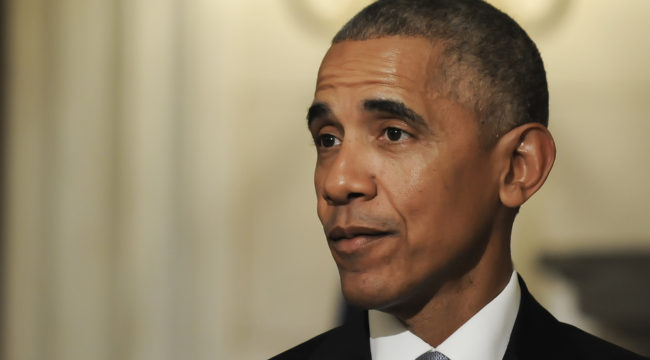 The Walls Close in on Team Obama

It goes without saying that conservatives and their Sean Hannity media megaphones hated Barack Obama with a passion, and now realize that his administration facilitated and orchestrated a smear attack on the GOP candidate for President.

For instance, the Daily Caller was all over the case today with even more inflammatory detail from a former U.S. Attorney and two White House National Security Council (NSC) veterans:

“What was produced by the intelligence community at the request of Ms. Rice were detailed spreadsheets of intercepted phone calls with unmasked Trump associates in perfectly legal conversations with individuals,” diGenova told The Daily Caller News Foundation Investigative Group Monday.

“The overheard conversations involved no illegal activity by anybody of the Trump associates, or anyone they were speaking with,” diGenova said. “In short, the only apparent illegal activity was the unmasking of the people in the calls.”

Col. (Ret.) James Waurishuk, an NSC veteran and former deputy director for intelligence at the U.S. Central Command, told the Daily Caller News Foundation’s (DCNF)  that many hands had to be involved throughout the Obama administration to launch such a political spying program.

“We’re looking at a potential constitutional crisis from the standpoint that we used an extremely strong capability that’s supposed to be used to safeguard and protect the country,” he said. “And we used it for political purposes by a sitting president. That takes on a new precedent.”

Michael Doran, former NSC senior director, told the DCNF Monday that “somebody blew a hole in the wall between national security secrets and partisan politics.” This “was a stream of information that was supposed to be hermetically sealed from politics and the Obama administration found a way to blow a hole in that wall,” he said.

“That’s a felony,” he told the DCNF. “And you can get 10 years for that. It is a tremendous abuse of the system. We’re not supposed to be monitoring American citizens. Bigger than the crime, is the breach of public trust.”

Senator Rand Paul pointed the finger at Susan Rice. And now that Obama’s fingerprints are all over the Deep State’s 2016 election intrusions, there is an opening for junior GOP legislators to follow Senator Paul’s brilliant lead.

In pouncing on the Susan Rice smoking gun Rand has managed to meld a partisan attack on Team Obama with a spirited and cogent defense of constitutional liberties under the 4th Amendment; and to expose the Deep State’s frightening potential for abuse of power.

At the moment, the pro-establishment spinners and their boosters in the mainstream editorial pages are trying desperately to distract from the case they can no longer deny.

That is to say, yes, Susan Rice — and probably CIA Director Brennan and others — did “unmask” the names of Trump associates. But it was all done, they maintain, in the pursuit of their duties to acquire “foreign intelligence information” and was in no way improper.

Likewise, they are loudly insisting that the Deep State surveillance apparatus was just going about its ordinary business of monitoring nasty foreigners when Trump associates — or even the Donald himself — became an inadvertent victim of “incidental” surveillance. So there is nothing sinister about that, either.

There can be little doubt that the whole Russian hacking narrative was invented by the Deep State, and then massaged and leaked by top Obama officials including Rice, Brennan and numerous others for one purpose alone that had nothing to do with national security.

That is, to prevent the election of an impetuous, strong-willed anti-globalist that the establishment deeply disapproved and then to re-litigate the election once the unthinkable happened on November 8th.

So not only is the whole hacking story essentially a glorified piece of opposition research peddled by the DNC and its affiliates, whatever “forensic evidence”  that may exist was undoubtedly manufactured by the Deep State itself.

That’s right. Owing to the latest Wikileaks disclosures of March 2017 via a trove of leaked CIA documents it calls “Vault 7,” it now appears that all of the other dubious intelligence community’s claims and “assessments” about Russian hacking have been ash-canned.

That is, Vault 7 suggests the CIA has the ability to manufacture and deposit electronic trails to “misdirect attribution” by leaving false cyber fingerprints.

Using a library of foreign malware and hacking tools, the CIA can plant Russian, Chinese, Iranian or other hackers’ fingerprints to make the hackers appear to be from one of those countries — even as they do the job from the comfort of their offices in Langley, VA.

Needless to say, that explains how the alleged Russian hackers could be so “clumsy” as to leave obvious and damning fingerprints on their work.

So it is probable that the Russians were “clumsy” because they weren’t actually “Russians”. They were undoubtedly CIA operatives from the Center for Cyber Intelligence.

But every single dirty deed of this illicit campaign will come out because the Deep State is not a monolith; it’s still populated with whistleblowers and operators with a score to settle.

I actually have some authoritative experience on this matter.

As an aide to a top House GOP leader back in the day, I had an insider’s bird’s-eye view of the Watergate drama between early 1973 and August 1974 when Nixon famously boarded the helicopter and bugged out of town with a pardon soon thereafter. And there was virtually nothing that didn’t come out once people started covering their backsides and settling scores.

If the Donald has the courage of his convictions, he will authorize the Department of Justice (DOJ) to unleash one or more ambitious U.S. Attorneys against Susan Rice, Brennan and others. Owing to their massive leaking campaign from the illicit Trump surveillance operation, they are all surely felons.

But I also expect that the dueling narratives about the election meddling of “Vlad versus Barry” will expose the soft underbelly of the Deep State and the toxic anti-constitutional essence of its operations.

I am speaking of NSA’s bulk collection of all the email, voice and data bits which pass through the internet and communications arteries of the nation.

Here’s the thing. The most pressing danger the nation faces arises from a few thousand barbarous jihadis bumping around the rubble-strewn cities and villages of the middle east that Imperial Washington has destroyed. But even this remnant no longer uses cell-phones or any other digital devices.

If they need to be tracked, it can be done the old-fashioned way with greenbacks on the barrel. Human intelligence (HUMINT) wouldn’t cost even 1% of the $75 billion now spent on the intelligence agencies annually, and would give the American constitution and our process of democratic self-government another lease on life.

In the meanwhile, the coming war of the two election hacking narratives –Vlad v. Barry — will absolutely dominate the Imperial City.

That beltway brawl will result in absolute paralysis and dysfunction in Washington soon — if it has not arrived already.

And so nothing constructive will happen on the Trump Stimulus, and a continuous Fiscal Bloodbath around continuing resolutions and debt ceiling increases will become the order of the day.

So, as I keep saying, get out of the casino. Now!