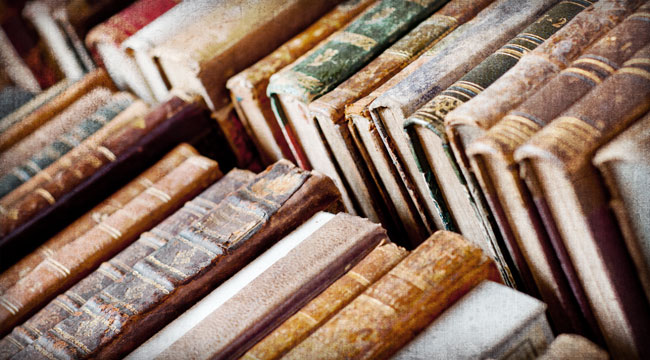 So reading the classics (or as Mark O’Connell describes in Slate, “the high-end stuff: the 19th-century Russians, the European modernists, the contemporary prestige names”) will make you “a better, more empathic person.”

Literary critic Paul Cantor and co-editor Stephen Cox concede the Marxist literary monopoly in what they call the “contemporary academy.” However, “Like any monopoly, this Marxist domination needs to be challenged,” they write in the preface to their groundbreaking book, Literature and the Economics of Liberty: Spontaneous Order in Culture.

Cantor and Cox possess the unique skill set and experience to fill in this piece of the division of labor puzzle. Professor Cantor earned his Ph.D. in English literature at Harvard and has taught English and literature at the University of Virginia for many years. As for his libertarian/Austrian economics bonafides, he attended Ludwig von Mises’ seminars in New York as a young man.

Cox is a professor of literature at the University of California, San Diego and was the editor of Liberty magazine for many years. He was also the author of Love and Logic: The Evolution of Blake’s Thought, The New Testament and Literature, and a number of other titles.

Literature and the Economics of Liberty consists of 10 lengthy essays, seven of which are written by one of the editors. Many of these essays were delivered at conferences held at the Ludwig von Mises Institute in Auburn, Alabama. The book gracefully meets at the intersection of readability and scholarship.

Cantor’s essay “Hyperinflation and Hyperreality: Mann’s ‘Disorder and Early Sorrow’” is a penetrating analysis of Thomas Mann’s depiction of everyday life during the Weimar hyperinflation of 1923.

While critics see Marxists lessons in Mann’s depiction of the bourgeois world, Cantor has the benefit of Mises’ monetary training to see the heavy hand of government intervention in the life of Dr. Abel Cornelius. The story depicts a family turned upside down, with the adults acting like children and the children acting like adults. The history professor’s life is a whirlwind of constant change, as the German government inflates its currency attempting to pay its overwhelming debts.

The government’s monetary manipulation displaces the stability and continuity of sound money with this disorder overtaking everyday life and all human relations. People adjust to their circumstances and Cantor uses Mann’s story to illustrate economic lessons. When eggs rise in price to six thousand marks, government then intervenes, restricting a family to purchase only five eggs per week in an attempt to deal with the mess it created. Mann’s Cornelius family sends the children out one by one to buy eggs under assumed names to buy enough eggs to survive.

The great historian Gerald D. Feldman refers to Mann’s essay in his monumental The Great Disorder: Politics, Economics, and Society in the German Inflation. He calls it “certainly the most famous but also the most detached and even Olympian work of fiction dealing with the inflation.”

Another person referenced in the book is Willa Cather. She won a Pulitzer Prize and her work was praised by the likes of Sinclair Lewis and H.L. Mencken. But her critics were unrelenting and drove her into seclusion, claiming her books lacked social relevance.

On the contrary, Cather’s work has the “application of certain essential principles of choice and valuation that are crucial to an understanding of the capitalist system but that long remained obscure even to professional economists,” writes Cox in the chapter “Cather’s Capitalism.”

Cox opened my eyes to Cather’s work and I immediately bought and read O Pioneers! to my great pleasure. That book, as Cox explains, “is a textbook exposition of capitalist theory and practice, viewed from a perspective that is highly unusual, even today, in the literature of the world’s greatest capitalist country — the capitalist perspective.”

It’s no wonder, critics, being mostly left-leaning, hated her work. Reading Cox will make those who favor free markets and individualism fall in love with Nebraska’s clear-writing favorite daughter.

Cox follows his Cather chapter with an enlightening one on Joseph Conrad and Conrad’s book The Secret Agent illustrating the author’s understanding not only of economics, but of the broader study of human action. It’s what Ludwig von Mises called praxeology. Conrad saw the world revolting against human action. He tells the story of businessman and spy Mr. Verloc whose friends in the book are called anarchists, but were what we would call communists.

Praxeology is also explored in Darío Fernández-Morera’s contribution “Cervantes and Economic Theory.” Many people know the story of Don Quixote, but didn’t give any mind to the relationship between Quixote and Sancho. Unlike the Middle Ages, their bond was not based upon loyalty between two men of noble blood, but instead based upon material reward and the desire for adventure.

Cox and Cantor’s collection will challenge your assumptions about literary giants the left has claimed as their own. Thomas Peyser concedes Walt Whitman’s social views align with the left, but argues the famous man of letters tended to lean right on economic and political issues. In his chapter on Whitman, Peyser focuses on the writer’s interaction of individuals acting freely, calling spontaneous order “a unifying thread in Whitman’s chief works.”

Spontaneous order is the theme of two chapters penned by Cantor. In one chapter, he uses Austrian economic theory to analyze literature and literary criticism. In a later chapter, Hayek’s great insight is used to examine Ben Jonson’s Bartholomew Fair. While Jonson’s famous comedy is thought to be, as Cantor quips “the Seinfeld of the English Renaissance — the original show about nothing,” the play “creates a dramatic example of order in disorder that mimics the marketplace itself.”

Another writer co-opted by the left was English Romantic poet Percy Shelley as his work consistently advocated for the poor. But Cantor reveals Shelley to be an advocate of sound money and fiscal prudence on the part of government. And unlike the liberals that embrace him, the poet had no issues with the industrial revolution and the factory system it engendered.

Literature and the Economics of Liberty is truly a unique book providing fresh insights to old classics. The Left stole literary criticism and inquiry many years ago just as they took the term “liberal” and made it their own. Cox and Cantor’s work is the first of hopefully many more salvos to bring literature and the great authors back to a place they can be understood and enjoyed in the proper light.

Ed. Note: A better and truer understanding of the virtues of liberty is something everyone can benefit from. Which is why the Laissez Faire Today newsletter exists… It gives readers the best commentary on liberty and freedom from the finest authors in the world, and offers incredible discounts on books and essays through its affiliation with Laissez Faire Books. Start living a freer, happier, wealthier life than you ever thought possible. Sign up for the FREE Laissez Faire Today email edition, right here.