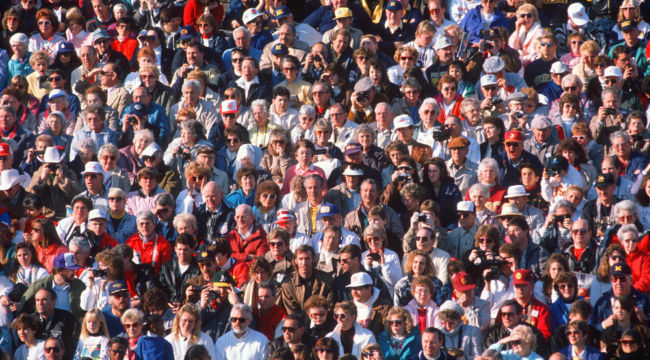 The annual edition of The Economist’s Intelligence Unit Democracy Index is out.

Across several democratic categories nations are ranked. These include but are not limited to:

Where does the United States rank among the nations of the Earth?

Is it the most democratic? Perhaps the fifth? Or the eighth?

We admit it at the outset — we find the spectacle of democracy vastly amusing, grand and gorgeous.

The charming fraud, the innocent delusion… the mushy-headedness of it all.

The “people” give the orders in democracy say the civics books.

But did anyone ask you — for example — if invading Iraq was a grand idea?

Or if your tax dollars should bail out Wall Street in 2008?

Or if your government should bury itself under $22 trillion of debt?

At the community level the business is not necessarily improved.

A red light camera was recently installed outside our Baltimore office. It presently mounts watch over the intersection of St. Paul and Madison Streets.

But were residents asked if we wished to be so deeply and elaborately policed?

What do you suppose would have been the answer if we were?

Yet the camera is on duty… hooking every felonious automobilist who crosses under one-billionth of one second too late.

Somehow it all seems beyond democratic agency, beyond all control.

It is simply the way the political machinery operates, a fellow concludes.

He may cluck-cluck his opposition to it… but he is largely a man resigned.

And if “the people own the government,” as the democratic gospel singers tell us, we suggest you put the theory to this test:

Approach the guardhouse at the nearest military installation. Demand immediate entrance, asserting your rights of property.

The ownership theory hinges upon the reaction you receive.

But to return to our question…

Where is the United States’ democratic ranking among the nations?

The answer, says The Economist’s Intelligence Unit Democracy Index, is…

Twenty-fifth — the United States is the 25th most democratic nation on Earth.

It finds itself sandwiched between Estonia and the Jeffersonian paradise known otherwise as Cabo Verde.

Thus America is sorted into the category of “flawed democracies,” coming beneath the “full democracies” of the world.

Of course, we recommend you take it all with requisite dose of table salt.

The Economist is globalist to the very tips of its fingers.

[President Donald] Trump has repeatedly called into question the independence and competence of the U.S. judicial system with regard to the ongoing federal investigation, led by Robert Mueller, into potential ties between Mr. Trump’s presidential campaign and Russia, and various courts’ efforts to block some of his policy orders, particularly regarding immigration… As a result, the score for political culture declined in the 2018 index.

But is democracy the gold standard of government?

Under our system We the People delegate the business of governing to officials we elect.

Should these officials execute their office to the dissatisfaction of voters, they are ousted from office.

But time often reveals the replacement is a scalawag on par with the original — if not worse.

We perpetually holler about ‘them rascally, no-good, lyin’ politicians’…

Them silver-tongued, glad-handing, baby-smooching mugs who babble one thing to get elected — but do another once in office.

Kick the bums out is the eternal bellow.

But we contend the politicians act as they do… because We the People act as We do.

We demand a shining military machine with every bell and whistle… heaping doses of Social Security… Medicare… a Rolls-Royce education… a million gaudy baubles.

But we do not wish to pay for it all.

Hand it over, we bark out one corner of our mouth. But don’t dare raise our taxes, we belch out the other.

Give me that tax break, says the one. No, give it to me, says the other.

A fourth files a claim of his own.

Meantime, the hard-luck farmer wants his back scratched. The hard-pressed businessman wants his belly rubbed. The overlabored teacher wants her apple.

And millions more are hard at the business…

All trying to work the angles, to get a bucket in the stream, to get a snout in the trough… to catch a penny.

It is the evil of “special interests” when the other fellow gets his.

But it is “democracy in action” when it butters our own parsnips.

We do not exempt ourself from criticism. We are out for No.1 as much as anybody.

Not without paying for it, that is.

Then observe the fleets of rotting eggs and tomatoes raining upon his head.

Ten times of the 10, our honest Abe is licked by the silver tongue who tickles our ears with false but catchy jingles.

This is the man who wins our franchise when we enter the vote booth.

But still the circus goes on, entertaining as ever, paraded out daily in a dozen rings…

The great warfare of factions, the thundering collision of interests… each fellow trying to get it over on the next.

Pity the poor politician who has to referee and score the bout.

He cannot please us all. Yet he tries.

So today we lift our modest hymn of sympathy for the poor, fimble-fambling politician.

He is a man in an impossible fix.

Stow your objection that the nation is nearly $22 trillion in debt largely because the election-minded politician has thrown the Treasury doors wide open.

We will not listen!

Under what alternate type of government would you be so royally entertained?

A dictatorship, for example, offers no comparable entertainment. All oars pull in one direction. And the fantastic combats of democracy are unknown.

We will occasionally find ourself out of joint for one reason or the other.

But we always take solace in the pleasant fact that we are quartered under the democratic folds of the stars and stripes.

Yes, we concede that “democracies have ever been spectacles of turbulence and contention,” as James Madison notes in Federalist No. 10.

We further grant his point that democracies:

“Have ever been found incompatible with personal security or the rights of property; and have in general been as short in their lives as they have been violent in their deaths.”

All true and more.

We even admit the possibility that American democracy is closer to the end of the chapter than the beginning.

But this you cannot deny:

What a show while it lasts…