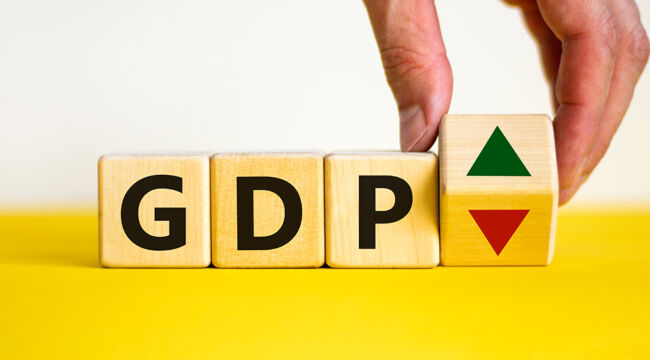 6.9% is plenty handsome — especially in consideration of Omicron’s omnipresence — and ongoing supply chain delinkages. Third-quarter GDP came in at a far less fulsome 2.3%.

And Bloomberg’s survey of economic Wrong Way Charlies had projected a 5.5% Q4 expansion.

But numbers can conceal more than they reveal. They can spin wondrous tales and tell fantastic lies.

What then can we glean from today’s gaudy numbers?

The U.S. economy notched its strongest growth in nearly four decades in 2021 after the government pumped trillions of dollars in COVID-19 relief, and is seen forging ahead despite headwinds from the pandemic, strained supply chains as well as inflation.

The strength of the economy last year stood in stark contrast to the collapse in activity in early 2020, but also speaks to the success of both the public and private sector in quickly adapting to the unprecedented challenges created by the pandemic.

Adds a certain Mike Reynolds, he being vice president of investment strategy at Glenmede:

The Q4 GDP report was a nice upside surprise in a string of recently underwhelming economic data points.

Just so. Yet we are not entirely persuaded that today’s numbers give a true signal of economic dynamism.

“The result flatters to deceive.”

The Facts About GDP

Assume the government pays a fellow to shovel out a hole. Assume further it pays him to shovel it back in.

Have you? Or have you merely witnessed a derangement, the fruitless birth and death of a hole?

Or if the government adds one cup of inflationary water to one cup of milk… do you have two cups of whole milk?

Government statistics may infer that you do. Yet two cups of watered milk do not equal two cups of whole milk.

Scratch the paint from the dazzling surface. Lift the lid. Peer within. Seize the numbers by the scruff and haul them in for interrogation.

What do we find? What accounts for the screaming headline number?

GDP got a big lift at the end of last year from frantic efforts by businesses to restock barren shelves and warehouses in time for the holiday season. The economy grew a lot more slowly if the inventory buildup is set aside…

The value of inventories soared by $240 billion — one of the biggest increases in decades — as companies ramped up production to try to meet demand.

Spending on inventories is a boost to GDP, and was an especially big boost in the fourth quarter.

The Bureau of Economic Analysis informs us piling inventories contributed a bulking 4.9 percentage points to the headline figure.

Rinse out their additions… and what do you find?

You find fourth-quarter GDP expanded at a 2% annualized rate — not 6.9%.

A 2% expansion is an expansion. Yet it is far from a blossoming.

Investment in housing declined for the third quarter in a row. Shortages and higher prices made companies more cautious about investment spending.

Meantime, real incomes — inflation-adjusted incomes, that is — declined at a 5.8% annual rate in quarter four.

That is largely because quarter four’s annualized inflation rate was an income-devouring 6.5%.

In all, 2021 consumer prices galloped along at the fastest gait since 1982.

Yet rejoice — Q4 GDP vastly trounced all reasonable expectations. Look away from the flames tearing through your dollars.

Rising inventories, which are considered an investment and add to GDP, are eventually followed by a decline in inventories when companies whittle them down again, and there is a price to pay for it…

Companies that sit on that inventory and have trouble selling it will at some point cut their orders to reduce their inventories. When this happens, sales drop all the way up the supply chain… when businesses whittle down their inventories by ordering less, it ripples through the economy, lowers GDP growth…

The economy won’t get a similar lift from restocking in the first quarter, however, and inventories might even be a negative. Early data point to the U.S. growing at a less than 2% annual clip in the first three months of the year…

Any growth we have from inventories now is sort of at the price of destocking later. Inventories aren’t a strategy for driving growth forward.

We must agree. They are not.

We believe only true productivity gains will drive growth forward. The Keynesian “multiplier” — the magic of water into wine, of debt into growth — has taken up division.

At today’s grievous debt-to-GDP ratio, the borrowed dollar yields no additional growth. It merely yields ashes, ashes in the mouth.

What about the stock market? Today’s “good” news landed upon Wall Street with a thud. Here is the reason, as we see it:

Rates will rise, support will dwindle. We hazard Mr. Powell will once again yield to Wall Street – but only when it is too late.