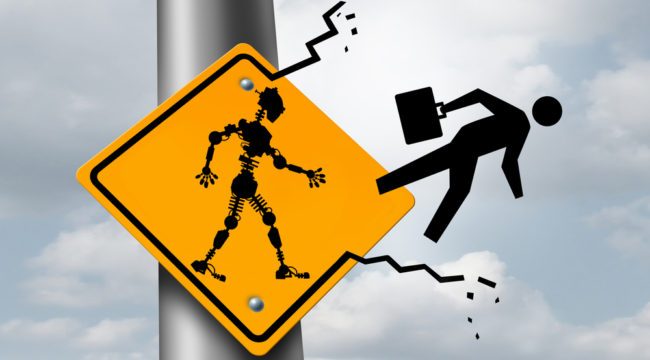 The Truth About Robots

Here’s the issue: if artificial intelligence (AI) and automation really destroy all jobs and change all industries, won’t everyone become poor and we’ll need a Universal Basic Income to survive?

Elon Musk, Robin Chase and many other billionaires say “yes.” Am I against a Universal Basic Income? I don’t know. It works for the world of Star Trek. It doesn’t work for the world of Star Wars. So who am I to say? It would be nice for everyone to have free money, but that’s not the way the world has ever worked.

First let’s look at the reality. Many industries are certainly changing because of automation and AI:

Will all of these people become homeless? Let’s assume they will be. Millions of people will be without jobs. Then I ask the very basic question: if that happens, who is buying what the robots produce? Nobody. Even the rich will stop getting richer. The doctors and lawyers will be out of jobs.

Automation doesn’t just affect Walmart cashiers. The next wave of AI is going to affect doctors, lawyers, and MANY higher income jobs. Get ready for it. Right now there is ENORMOUS demand for many services and products that society has never been able to meet. One basic example from the recent past: ATM machines.

There was huge demand for an easy-to-use machine that would allow people to get cash without waiting in line at a bank.

The bank teller industry was terrified. Would this be the end? Would we no longer need tellers? Here’s the truth of what happened:

That’s just one example. Now let’s go to the theory:

The increase in automation and AI will create greater supply for services and products in high demand. This will create more conveniences for consumers at cheaper prices.

Consumers like cheaper prices. It gives them more money. And selling greater supply at cheaper prices will allow businesses to generate greater profits. Those profits will allow for greater expansion, more products and services, and more employees hired.

For a moment, assume I’m wrong. Assume that automation creates huge pockets of unemployment and poverty. If that happens, there would be no demand for the increase in services and products. There would be no need for automation at all, so companies would stop investing in it.

True, there might end up being fewer cashiers in the world. But maybe cashiers want to explore different jobs. Who knows? Creative destruction has been around since the beginning of the concept of “an economy.” Do you know where the word “Luddite” comes from?

A Luddite refers to someone who hates technology. Ned Ludd was afraid of sewing looms. He thought it would put seamstresses out of business. So he would burn the looms, which at the time were a groundbreaking new technology. Did the seamstresses lose their jobs? Some certainly did. But an entire fashion industry was created.

Demand went up huge for fancy dresses that were now cheaper and no longer accessible only to the upper classes. Millions of people who couldn’t afford these dresses before started buying more dresses than ever before. Huge shopping stores sprung up, creating more jobs. Entire industries were created out of nothing simply because of the invention of the sewing loom.

It can even be argued that the entire Industrial Revolution was kickstarted by this “automation,” even though many seamstresses might have had to look for new opportunities as a result. For one thing, the demand for dresses created new demand for cotton. This opened up greater trade between England and the U.S., which created many more jobs.

And, sadly, it also turned up the volume on the slave industry to extreme levels, which led to the U.S. Civil War. So yes, creative destruction cuts both ways, creating and destroying. But ultimately, freedom and wealth have become the result in every case. And freedom and wealth create jobs.

One more example, which is my own…

I was a computer programmer who, for a while, specialized in the technology to create websites. That skill set is no longer needed by anyone. WordPress allows people to create entire websites at the touch of a button without having to do a bit of coding. And these are websites that would have taken me a month to make back in the 90s. Did I lose my job? No. But my job changed.

Rather than me creating websites for others, which became a commodity, I started creating websites that I loved. And websites that I felt other people could use. It wasn’t about just the site itself anymore, but what it offered and how useful it was. This allowed me to create greater efficiencies when I made websites that helped people. This in turn led me to hire people and create jobs and wealth and many other opposites.

Creative destruction is a part of life. Just ask the buggy whip makers and the lamplighters. When tech came for their jobs — the automobile and the electric lightbulb, respectively — it happened fast and it was permanent.

But we’re also going to see a lot of new, exciting jobs pop up in the next few years, as technology continues to change our lives and the work we all do.

If things change for the worse, the laws of supply and demand mean that their value goes to zero. Automation would stop. But if things change for the better than wealth is created across all income classes. And then jobs are created. Prices are lower so consumers are happier. And life becomes richer with greater opportunities.

The good news is that AI and automation aren’t going to destroy the job market like so many people expect. They WILL shake things up, but they’ll create many new opportunities.

This won’t all happen right away, but soon we’re going to see a new landscape of jobs. It’s important to get ready for it.

And it’ll create fortunes for investors who see it coming.