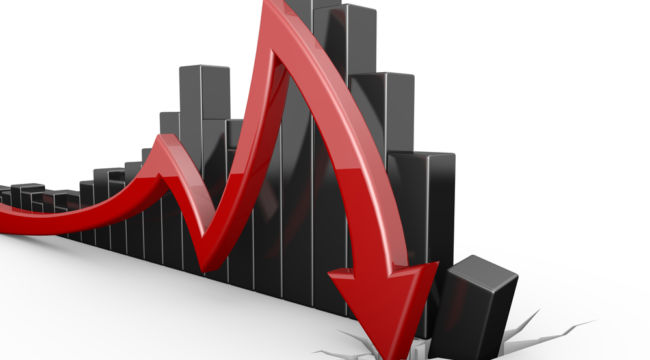 The Truth About October Crashes

It is September. Summer’s carefree days are ended.

America’s youth are back at their desks. Its adults are back in the salt mines.

Here in Baltimore summer’s fever has broken — for the day at least. The air is pleasant. And a fair, refrigerating breeze steals in from the north.

But our beat is money… and markets.

Many consider September a peacefulness before dreaded October.

October’s record is so scandalous, so felonious, it has even earned a title:

Today we haul the accused into the dock, interrogate its record… and announce a verdict.

But let us first pronounce judgment on today’s proceedings…

The Dow Jones opened deeply in scarlet… and was soon down nearly 400 points.

For explanations we needn’t wander far.

American tariffs on $112 billion of Chinese goods entered effect Sunday. They set off immediate Chinese countertariffs on some $75 billion of American products.

The index is a barometer of American economic health.

Any reading above 50 indicates a hale and hearty outlook. Any reading below 50 warns of an approaching influenza.

July’s reading came in at 51.2. And a Wall Street Journal survey of economists had August’s index registering at 51.

What was its actual figure?

“The report will undoubtedly add to fears that more weakness is ahead,” moans Jim O’Sullivan, chief U.S. economist at High Frequency Economics.

It undoubtedly will… and for cause (see below).

The Dow Jones salvaged the afternoon somewhat, and ended up losing 285 points on the day.

But returning to the question of the hour: Is October the menacing scourge we’ve all been led to believe?

History says the answer is… no.

October’s bankrupt reputation likely owes to a string of sour luck. And its conviction was based heavily upon scattered, circumstantial evidence.

The gentlemen and ladies of Yardeni Research further vindicate October. The average October market return is not negative in the least, they inform us.

We must therefore conclude that an innocent man has been pitched into infamy… and packed off to the gallows on a wrongful charge.

The record argues that yes, another month is the true menace. Which month?

“Since the Dow Jones industrial average was created in the late 1890s,” financial columnist Mark Hulbert notes, “September has produced an average loss of 1.1%.

Here is the evidence — the red-handed evidence — with smoke billowing from the gun barrel: 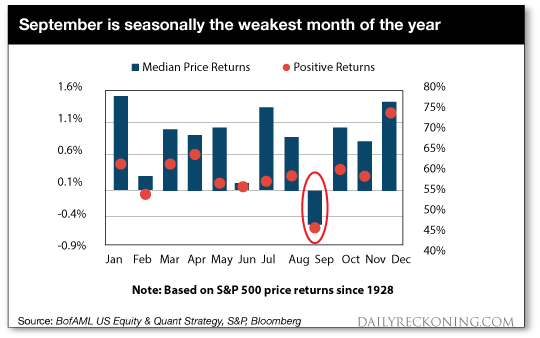 October is a heaven beside it, a month of nectar, of honey.

The stock market went backward in August, for the first occasion since May. Today’s rout merely extends the trendline.

Of course… we are but three days into the month.

But if history is a reliable barometer, watch out for the next 27.

It comes courtesy of Michael Snyder of the Economic Collapse blog:

#1 The U.S. and China just slapped painful new tariffs on one another, thus escalating the trade war to an entirely new level.

#2 JPMorgan Chase is projecting that the trade war will cost “the average U.S. household” $1,000 per year.

#3 Yield curve inversions have preceded every single U.S. recession since the 1950s, and the fact that it has happened again is one of the big reasons why Wall Street is freaking out so much lately.

#4 We just witnessed the largest decline in U.S. consumer sentiment in seven years.

#5 Mortgage defaults are rising at the fastest pace that we have seen since the last financial crisis.

#7 The U.S. manufacturing sector has contracted for the very first time since September 2009.

#9 Gross private domestic investment in the United States was down 5.5% during the second quarter of 2019.

#10 Crude oil processing at U.S. refiners has fallen by the most that we have seen since the last recession.

Perhaps you would care to see more? As you wish:

#11 The price of copper often gives us a clear indication of where the economy is heading, and it is now down 13% over the last six months.

#12 When it looks like an economic crisis is coming, investors often flock to precious metals. So it is very interesting to note that the price of gold is up more than 20% since May.

#14 We just learned that Sears and Kmart will close “nearly 100 additional stores” by the end of this year.

#16 The Labor Department has admitted that the U.S. economy actually has 501,000 less jobs than they previously thought.

#17 S&P 500 earnings per share estimates have been steadily falling all year long.

#18 Morgan Stanley says that the possibility that we will see a global recession “is high and rising.”

#19 Global trade fell 1.4% in June from a year earlier, and that was the biggest drop that we have seen since the last recession.

#20 The German economy contracted during the second quarter, and the German central bank “is predicting the third quarter will also post a decline.”

We haven’t the heart — or the stomach — to continue.

But do we hazard our own prediction of September doom?

Of course we do not.

Here at The Daily Reckoning, our inclinations are strong. But our commitments are weak.

But given September’s dark record, we are under bonds to remind you:

September is one of the most dangerous months to speculate in stocks.