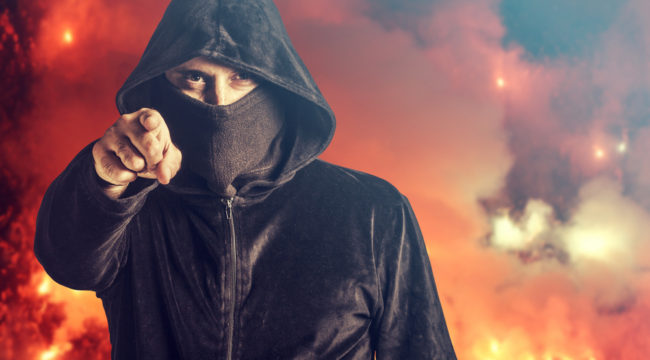 The Trouble With Democracy

We’ve been mulling the state of the great American Republic lately and ended up with this whopper..

Maybe the problem’s not the politicians. Maybe the real problem is We the People…

We the People howl it’s them rascally, no-good, lyin’ politicians,…

Them silver-tongued, glad-handing, baby-smooching mugs who babble one thing to get elected… but do another once in office.

Kick the bums out is the eternal bellow….

But our thesis is this: The politicians are the way they are… because we’re the way we are.

In other words, we have met the enemy… and the enemy is us.

We the People demand a globe-trotting army to police the world… heaping doses of Social Security… Medicare… a Rolls-Royce education… a million bells and whistles.

But we just don’t want to pay for it all.

Fork over the goodies, we bark out of one corner of our mouth. But don’t raise our taxes, we belch out the other.

And yes, We the People may be heart and soul for limited government.

The hard-luck farmer wants his back scratched. The hard-pressed businessman wants his belly rubbed. The overburdened teacher wants her apple.

And millions more, all trying to work the angles… to catch a penny… to get their buckets in the stream.

It’s “special interests” when the other guy gets his cut.

But it’s “democracy in action” when it butters our own parsnips.

We make no judgment here. We’re as guilty as the next guy.

So today we lift a modest hymn of sympathy for the poor, fimble-fambling politician.

He’s in an impossible fix. He simply can’t afford to be honest with us…

Let him tell us we can have either A or B but not A and B — and definitely not A, B and C. Not without paying for it, that is.

Then watch the rain of rotten eggs and tomatoes fall about his head.

Our honest Abe gets licked 10 times out of 10 by the cad who tickles our ears with false but gaudy jingles.

We all claim to hate that politician. But where rubber meets road, he wins our vote.

David learned the smallest budget item is sealed behind fortress walls and ringed by guards, ready to repel any invader.

Example: David wanted to eliminate the national endowments for the arts and humanities and the Corporation for Public Broadcasting.

They weren’t proper functions of the federal government, David argued. And there was more than enough private philanthropy to make the shortage good.

Six hours of spending — out of a 365-day calendar!

But even that proved impossible.

David says even Reagan thought nixing the things was just too much. So they sent a modest 25% cut to Capitol Hill.

What did they end up with?

Breadcrumbs. They got, in David’s words, “maybe an 8% reduction for a couple of years until the various K Street lobbies and assorted forces of high-toned culture completely restored the funding.”

Question: If you can’t even put a sustained 8% ding in the national endowment for the arts and humanities or the Corporation for Public Broadcasting… how are you ever going to save any real money?

For the record, Trump’s new budget also proposes axing the subsidy to the Corporation for Public Broadcasting, including PBS and NPR.

The odds of it actually happening?

There’s a 31% cut to the Environmental Protection Agency… a 16% cut to the Commerce Department… and a 32% haircut for the State Department. Even the IRS comes under the knife.

Yes, Trump’s the master negotiator, The Art of the Deal and all, so maybe this is all just the opening ante.

But when the “special interests” — or those “standing up for regular Americans” — are done sugaring Congress, will any of these cuts survive?

And if some cuts do survive… how big?

We’ll take the under on that betting line, thank you.

Meanwhile, the national debt weighs in mountain-high at $20-plus trillion. And growing. Fast. With no end in view.

According to lore, writer Alexander Fraser Tytler (1747–1813) allegedly said “A democracy cannot exist as a permanent form of government”…

“It can only exist until the majority discovers it can vote itself largess out of the public treasury. After that… the democracy collapses because of the loose fiscal policy ensuing, always to be followed by a dictatorship, then a monarchy.”

Whether he ever said it or not, someone did. But what rubbish.

We would never have a monarchy here…