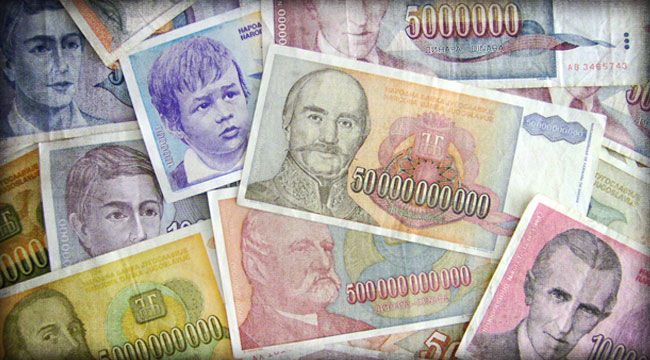 There is a fundamental incompatibility between the attainment of global economic stability and having a single national currency perform the role of the world’s reserve currency. This is hardly a new revelation. But events of the past few months have brought this topic back into the spotlight.

Belgian born American economist Robert Triffin first highlighted this incompatibility in the 1960s. He observed that having the US dollar perform the role of the world’s reserve currency created fundamental conflicts of interest between domestic and international economic objectives.

On the one hand, the international economy needed dollars for liquidity purposes and to satisfy demand for reserve assets. But this forced, or at least made it easy, for the US to run consistently large current account deficits.

Triffin argued that such persistent deficits would eventually put pressure on the dollar and lead to the demise of the Bretton Woods system of international exchange.

The Triffin Dilemma, therefore, argued that the demands on an international currency meant that excess supply would undermine its value.

After WWII the Bretton Woods international monetary system came into being. This was a fixed rate currency regime with the dollar as the global reserve currency. But to ensure stability and financial discipline, the major currencies were fixed to the dollar and the dollar was fixed to gold at the rate of US$35 an ounce.

This is where the Triffin Dilemma kicked in.

The US soon understood that reserve currency status allowed them to run large deficits. The deficits were ‘paid’ for by issuing dollars. When the excess dollars began showing up in global central banks, they began converting their dollars into gold. This lowered the value of the US dollar in relation to gold.

At first the authorities tried to manage the Dilemma. In 1961 they established the ‘London Gold Pool’ in an attempt to keep the dollar price of gold to $35 an ounce. This system worked for a while but fell apart by 1968 when France withdrew from the Pool.

The various nations then attempted to preserve the Bretton Woods system by maintaining a two-tiered gold market; one operating at the official $35 an ounce price while another traded gold at the market price, which was well above $35. Of course such a policy was completely unsustainable and it too failed.

Bretton Woods was on its last legs. President Nixon ended the system once and for all when in August 1971 he suspended the convertibility of dollars into gold. From that point on, the dollar was without an anchor and the global monetary system went from a fixed to floating regime.

What followed was a decade of monetary instability and record high inflation.

But Triffin’s Dilemma never went away. It did remain out of sight though as parties on both sides of the equation enjoyed the mutual benefits of the dollar’s reserve status.

The US benefitted by paying for imports with essentially costless dollars. In turn, the US’ main trading partners enjoyed robust demand for their products, creating employment and income growth.

The huge deficits brought about by excess US consumption produced a massive amount of liquidity throughout the global economy. While Triffin’s Dilemma would have predicted a collapse of the dollar because of the glut of dollars in the system, such an outcome didn’t eventuate.

This was primarily because the beneficiaries of US consumption didn’t want it to end. So they reinvested their excess dollars back into US asset markets, notably US Government debt. Such actions supported the dollar, kept interest rates low, and perpetuated the imbalances.

Some commentators called this apparent happy state of affairs ‘Bretton Woods II.’ As the saying goes, markets make opinions and this was a flawed opinion born out of an ignorance of what brought the first Bretton Woods system undone.

The underlying conflicts identified by the Triffin Dilemma always remained. The ease with which the US could borrow and create debt was tolerated for decades. No doubt such tolerance was due to gold no longer being a monetary anchor.

At this point, the end of the decades long US driven credit expansion turned abruptly into a contraction and asset markets collapsed. Amongst the carnage, the dollar was about the only asset to increase in value relative to everything else. This was because previously abundant global liquidity rapidly evaporated and returned to the source, pushing up the value of the dollar.

The point here is that in times of crisis, the US dollar trades as the world’s reserve currency, not based on its domestic fundamentals, which are just as bad as other countries. That’s what you saw in late 2008 early 2009.

So the Triffin Dilemma is beginning to rear its head again. The US domestic political preference is for a weaker dollar to stimulate exports and create employment. But the international situation, being market driven, is more powerful. The dollar is therefore strengthening relative to other currencies while the U.S. economy is still weak.

In the past the US response to this currency strength would have been to lower interest rates and turn on the liquidity taps. This would have increased credit growth domestically and liquidity internationally (think of all those US treasuries piling up in foreign central banks when US economic growth is strong). But the interest rate ammunition has been spent.

Like every other country, the US needs a weaker currency. However a global reserve currency operates under different rules to ordinary currencies. In times of global uncertainty, like now, the US dollar will be strong regardless of its fundamentals.

With the Euro-zone under pressure, the reserve asset of choice remains the US dollar. Perversely, this will allow the US authorities to pursue even more reckless policies in their attempts to provide global liquidity.

The inherent conflicts in the global monetary system that led to the great financial crisis have not been addressed. The dollar has served as the world’s reserve currency, without being linked to gold, since 1971.

While on the surface the experiment has been a success, the legacy is a huge buildup of debt. The need for global liquidity creates an incentive for the US to live beyond its means and run up debt levels. Perversely, the debts sit in the vaults of foreign central banks and masquerade as assets. (It is from this asset base that domestic banking systems generate their own credit growth).

But debt levels have reached a point where this system no longer works properly. The crisis of 2008 has quickly given way to the European sovereign debt crisis of 2010. They were just a sign of things to come.

The implications for you as an investor are many. Expect continued uncertainty and volatility as the world increasingly recognises the current financial system has reached its use by date. This is a gradual and subtle process. You won’t see this recognition splashed across the front pages anytime soon. But it is happening now.

In the short term you should expect continuing loose monetary policy out of the US and a lack of fiscal discipline. Of course, the big picture investment implication here is that the US dollar will eventually lose its role as the world’s sole reserve currency. This is a multi year event and certainly difficult to assess in terms of the effect on markets.

The IMF is already holding discussions about making changes to the financial architecture. Very few people understand the magnitude of what is going on, but it hasn’t been lost on the gold market.

Gold will be one of the major beneficiaries of change. Back in the 1960s Robert Triffin warned about the dollar glut and the fact that it would bring the Bretton Woods system undone. He was right.

The rising gold price was the first warning sign of the system’s weakness. So the best way to profit from this instability is to own physical bullion (not ETF’s or gold certificates). For a longer term bet on forthcoming changes to the financial system, you should be looking to buy gold on weakness.

Ed. Note: If the excessive money printing of various central banks around the world has taught us anything, it’s that there is no substitute for sound money. And as to that, gold is historically proven to be the best example of that. Readers of The Daily Reckoning email edition know that fact better than most. And they receive regular commentary on that and a variety of topics. If you’d like to join them, you can sign up for FREE right here.