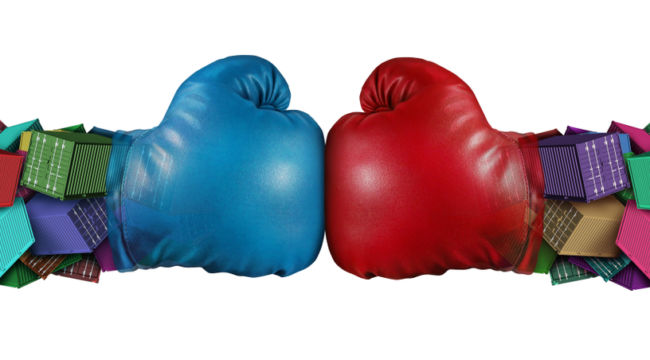 The Trade War Will Get Worse

Several years ago, I began warning my readers that a global trade war was likely in the wake of the currency wars. This forecast did not seem like a stretch.

It would simply be a replay of the sequence that prevailed from 1921–39 as the original currency war started by Weimar Germany morphed into trade wars started by the United States and finally shooting wars started by Japan in Asia and Germany in Europe.

The existing currency war started in 2010 with Obama’s National Export Initiative, which led directly to the cheapest dollar in history by August 2011.

The currency war evolved into a trade war by January 2018. Unfortunately, a shooting war cannot be ruled out given current developments in North Korea and the South China Sea.

The reasons the currency war and trade war today are repeating the 1921–39 sequence are not hard to discern. Countries resort to currency wars when they face a global situation of too much debt and not enough growth.

Currency wars are a way to steal growth from trading partners by reducing the cost of exports. The problem is that this tactic does not work because trade partners retaliate by reducing the value of their own currencies. This competitive devaluation goes back and forth for years.

Everyone is worse off and no one wins.

Once leaders realize the currency wars are not working, they pivot to trade wars. The dynamic is the same. One country imposes tariffs on imports from another country. The idea is to reduce imports and the trade deficit, which improves growth. But the end result is the same as a currency war. Trade partners retaliate and everyone is worse off as global trade shrinks.

The currency wars and trade wars can exist side by side as they do today. Eventually, both financial tactics fail and the original problem of debt and growth persists. At that point, shooting wars emerge. Shooting wars do solve the problem because the winning side increases production and the losing side has infrastructure destroyed that needs to be rebuilt after the war.

Yet the human cost is high. The potential for shooting wars exists in North Korea, the South China Sea, Taiwan, Israel, Venezuela and elsewhere. Let’s hope things don’t get that far this time.

What most surprised me about the new trade war was not that it started, but that the mainstream financial media denied it was happening. It’s possible to date the trade war from January 2018 when Trump announced tariffs on solar panels and appliances mostly from China.

A deeper analysis would look back to 2001 when China joined the World Trade Organization (WTO) and immediately began to break the rules, or 2008 when China cheapened its currency to prop up exports during the global financial crisis. But January 2018 is a more formal date because the Trump tariffs were explicit and not indirect as China’s tactics had been.

Today the story line is that the trade war will not have a large impact on macroeconomic growth. It will. The mainstream media have been wrong in their analysis at every stage of this trade war. The trade war is here, it’s highly impactful and it will get worse. The sooner investors and policymakers internalize that reality, the better off they’ll be.

The easiest way to understand the trade war dynamics is to take Trump at his word. Trump is not posturing or bluffing. He will agree to trade deals, but only on terms that improve the outlook for jobs and growth in the U.S. Trump is not a globalist; he’s a nationalist. That may not be popular among the elites, but that’s how he sets policy. Keeping that in mind will help with trade war analysis and predictions.

Trump is entirely focused on the U.S. trade deficit. He does not care about global supply chains or least-cost production. He cares about U.S. growth, and one way to increase growth is to reduce the trade deficit. That makes Trump’s trade policy a simple numbers game rather than a complicated multilateral puzzle palace.

If the U.S. can gain jobs at the expense of Korea or Vietnam, then Trump will do it; too bad for Korea and Vietnam. 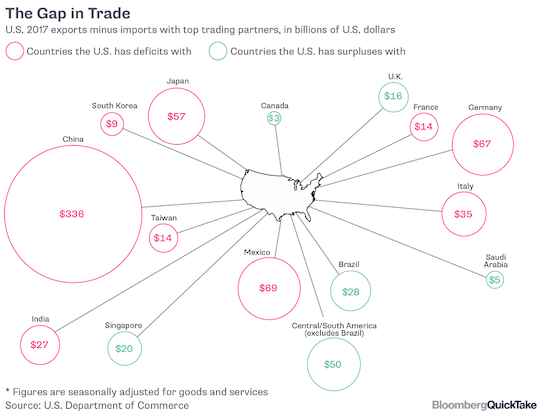 The problem quickly becomes obvious. The U.S. trade deficit is due almost entirely to four trading partners: China, Mexico, Japan and Germany. Of those, China is 64% of the total. President Trump just concluded a new trade deal with Mexico that benefits both countries and will lead to a reduced trade deficit as Mexico buys more U.S. soybeans.

The U.S. has good relations with Japan and much U.S.-Japanese trade is already governed by agreements acceptable to both sides.

This means the U.S. trade deficit problem is confined to China and Germany (often referred to euphemistically as “Europe” or the “EU”). The atmosphere between the U.S. and the EU has been improving lately and Germany knows it needs to make concessions in order to avoid punitive tariffs on EU exports to the U.S.

Therefore, the global trade war is not global at all but really a slugfest between the U.S. and China, the world’s two largest economies. This reality and the gravity of the situation are beginning to sink in even to the most Pollyanna-ish rookie journalists. Seasoned market-maker and stock specialist Stephen “Sarge” Guilfoyle offered this insightful analysis in his blog for Aug. 31, 2018:

Part of the problem with market reaction to trade news is that keyword-reading algorithms react ahead of human response to any news item. Every time. Price discovery has become perverse. This is now part of the complex, changing environment. Just this week, we have already seen a tremendous effort to renegotiate a NAFTA deal that has the backing of both the United States and Mexico. A deadline for bringing Canada on board looms today…

Less than two weeks ago, the president threatened to pull the United States out of the WTO (World Trade Organization). The president has complained in the past that the WTO does not always side with the U.S. and sometimes infringes on rights of self-determination.

While President Trump rattles that cage, the comment period for U.S. plans to impose a 25% tariff on another $200 billion worth of annual Chinese imports is due to expire. This is an extension of the U.S./China trade war that the Chinese side will be unable to match dollar for dollar without getting creative…

The president also rejected a European Union offer to scrap automobile tariffs, citing European consumer habits that lead to a greater appetite across that continent for vehicles manufactured on the continent. “Almost as bad as China,” I believe is what President Trump said…

Guess what? In the realm of global trade, the United States is an extremely desirable customer. In fact, for most, we are their best customer.

Think EU manufacturers can afford to sell substantially fewer vehicles inside U.S. borders? Of course not. The winner, as always in tense negotiation, will be the one that the other side believes will walk.

Even China is slowly coming to the realization that the trade war is real and here to stay. Senior Chinese policymakers are beginning to refer to the trade war as part of a larger strategy of containment of Chinese ambitions that may lead to a new Cold War. They’re right.

Unlike in other policy arenas, Trump enjoys bipartisan support in Congress. The Republicans are backing Trump from a national security perspective and the Democrats are backing him from a pro-labor perspective. China sees the handwriting on the wall.

This trade war will not end soon, because it’s part of something bigger and much more difficult to resolve. This is a struggle for hegemony in the 21st century. The trade war will be good for U.S. jobs but bad for global output. The stock market is just waking up to this reality. The currency wars and trade wars are set to get worse.