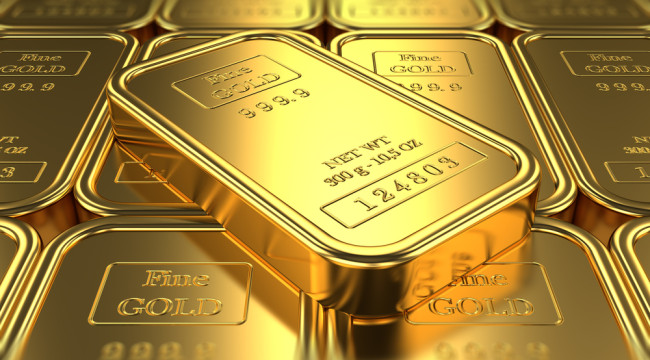 MELBOURNE — Global stocks finished the session down again overnight. European stocks fell over 2% thanks to the ongoing woes of the carmakers, while US stocks fared a little better, closing less than 0.5% lower.

If futures markets are any guide, Aussie stocks should open flat today, although my guess is that selling pressure might overwhelm the buyers as the day wears on.

The big winner overnight was gold, that old barbarous relic. It rallied around US$20 an ounce to US$1,155. While it’s still stuck in the doldrums in terms of US dollars, it’s a different story for Aussie dollar gold investors.

After putting in a panic low in November last year, Aussie dollar gold soared, peaking in late January of this year. It then spent the next eight months consolidating those gains. It looked a bit dicey in July/August though. The trend was at risk of turning back down.

But a strong rally in August, followed by more gains in September, gave the upward trend a push.

I’ve been banging on about the attractiveness of Aussie gold producers for a while now. A few weeks ago, I recommended a promising Aussie gold stock to subscribers of Crisis & Opportunity. At the current gold price, margins and profitability are very strong.

Over the past few years this stock endured a number of setbacks. But this is what created the opportunity…the recovery is now underway.

While the broader market is at risk of entering into bear territory, many Aussie gold stocks look very bullish. Gold is doing its job as a wealth protector in volatile times.

Perhaps gold reacted to the poor population data released by the Australian Bureau of Statistics yesterday? It wasn’t good news for the Aussie economy or Aussie dollar. From the Wall Street Journal…

SYDNEY—Australia’s population growth is quickly fading, new data revealed Thursday, threatening to rob the country of one of its strongest pillars of growth at a time of rising risk of recession.

Australia’s population increase through migration touched a decade low in the year through March, the statistics bureau said on Thursday. About 173,000 more people migrated to this country of nearly 24 million in the past year than left, 45% less than at the peak of the boom in 2008.

‘With few industries able to match the hundreds of billions of dollars that were plowed into resources projects in recent years, Australia needs population increases to fuel consumer spending on everything from real estate to flat-screen TVs. Analysts now warn of a demand shock to the economy, which has been driven by what some economists consider “dumb growth”: increasing wealth just by adding more people. 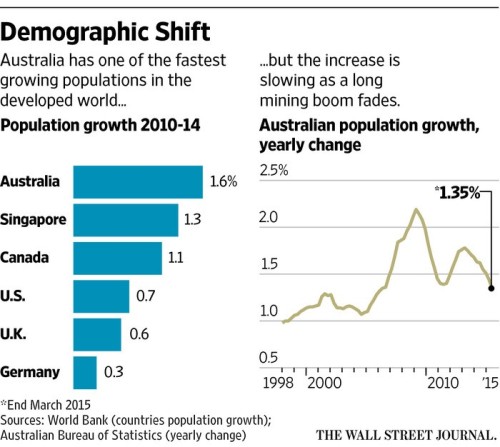 Dumb growth indeed. Population and productivity growth are the two drivers of economic growth. For years, Australian politicians only cared about one P – population.

Thanks to the commodities boom, it was easy to entice people into the country. More people means more demand for houses and goods and services, which means more economic growth.

But while politicians sat back and cheered on this dumb growth, our cities began to suffer from infrastructure constraints. Lack of infrastructure equals lack of productivity, which eventually drags on economic growth, even as the population continues to increase

Like everything else politicians do, this population led growth model was just a short term fix. With the commodity boom now over, population growth is at its lowest point in 10 years.

Check out the right hand chart in the graphic above. It resembles Australia’s terms of trade boom and bust. The bust phase still has some time to go. So expect population growth to keep on falling, making future economic growth forecasts harder to achieve.

In a refreshing change of tune, the new Treasurer, Scott Morrison, seems to understand the productivity challenge facing Australia. And housing is at its core. From the SMH:

When Joe Hockey was asked his advice to first home buyers struggling to afford a house, he notoriously answered “get a good job”. His successor, Scott Morrison, has a different answer.

Mr Morrison sees a market in need of reform and plans to do something about it.

“There’s a really big regulation modernisation agenda for the housing sector and that can really improve competitiveness and efficiency,” he said in an interview with Fairfax Media. “One of the biggest competition inhibitors is the housing market.”’

It’s just more talking but it’s a start at least. Talking is necessary to get people to understand the challenges. But ultimately, only action will get results. And as I keep saying, we’re unlikely to get the necessary action until it’s too late.

The head of Treasury, John Fraser, seems to agree. In an interview with the Financial Review, he contrasts Australia’s situation now with that of the 1980s:

“I think in the 80s people saw that we had imminent problems,” he said. “Then we had double-digit inflation. We had spending that was growing at a rapid pace. Our lack of competitiveness was evident. We even had a broader recognition about the need for labour market reform.

‘“We don’t have that now. We have the feeling after 25 years of uninterrupted growth that everything is fine.”

Everything isn’t fine. We’ve followed ‘dumb growth’ for years in the expectation that we could ride the China Dragon to riches. We’ve blown a housing bubble to replace the mining bubble, and taken on record debt levels.

We still congratulate ourselves for avoiding the GFC, not understanding that if nothing changes, our GFC actually lies ahead.

Turnbull and Morrison offer a glimmer of hope. But following years of dumb and dumber politics, they really have their work cut out for them.