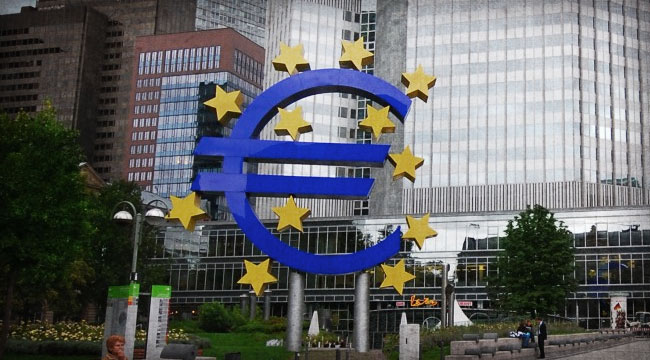 The Solvency of the ECB is at Stake

Make no mistake; the Greek crisis is a euro crisis that threatens the solvency of the European Central Bank (ECB) itself, and therefore confidence in the currency.

Before going into why, a few comments on Greece will set the scene…

Last weekend it became clear that Greece is heading for both a default on its government debt and also a failure of its banking system. With the benefit of hindsight it appears that the Greek government was unwilling to pretend that it was solvent and extend its financial support as if it was. The other Eurozone finance ministers and the troika were not prepared to accept this reality.

There is no immediate benefit from debating why. What matters now are the economic and financial consequences, which are basically two: the Eurozone’s banking system is very fragile and cannot absorb any sovereign default shocks easily, and the ECB itself now needs refinancing. Let’s concentrate on the ECB first.

The losses the ECB face from Greece alone are about twice its equity capital and reserves. The emergency liquidity assistance (ELA) owed by Greece to the ECB totals some €89 billion, and the TARGET2 balance owed by the Bank of Greece to the other Eurozone central banks is a further €100 billion, which at the end of the day is the ECB’s liability.

The total from these two liabilities on their own is roughly twice the ECB’s equity and reserves, which total only €98 billion. Given the likely collapse of the Greek banking system and the government’s default on its debt, we can assume any collateral held against these loans, as well as any Greek bonds held by the ECB outright are more or less worthless.

The ECB has two courses of action: either it continues to support Greece to avoid crystallizing its own losses or it recapitalizes itself with a call upon its shareholders.

The former appears to have been ruled out by last weekend’s events. For the latter a rights issue looks challenging to say the least, because not all the EU national central banks are in a position to contribute. Instead it is likely that some sort of qualifying perpetual bond will be issued for which there should be ready subscribers.

How this is handled is crucial, because there is considerable danger to the ECB from the instability of the whole Eurozone banking system, which is highly geared and extremely vulnerable to any reassessment of sovereign credit risk.

If you believe that the Greek crisis has no implications for Italy, Spain, Portugal and even France, you will rest easy. This surely is how the ECB would like to represent the situation. If on the other hand you suspect that the collapse of the Greek banking system, plus their sovereign default, together with a knock-on effect in derivative markets, have important implications for euro-denominated bond markets, you will probably run for the hills.

The latter being the case, highly geared Eurozone banks are likely to face difficulties, and they will affect the ECB’s own holdings of all bonds, both owned outright and held as collateral against loans to rickety banks.

In short, the ECB’s balance sheet, which is heavily dependent on Eurozone bond prices not collapsing, is itself extremely vulnerable to the knock-on effects from Greece. As the situation at the ECB becomes clear to financial markets, the euro’s legitimacy as a currency may be questioned, given it is no more than an artificial construct in circulation for only thirteen years.

In conclusion, the upsetting of the Greek applecart risks destabilizing the euro itself, and a sub-par rate to the US dollar beckons.

This week should see the dollar strong against the euro and the euro price of gold can be expected to rise. The extent to which these happen may depend on whether or not central banks intervene. For what it’s worth last time this happened (over Cyprus February 2013) Europeans were reported to be requesting physical delivery against their unallocated gold accounts.

The following April a co-ordinated bear raid of unprecedented size pushed the gold price down from $1,580 to a low of $1,183. The purpose of the raid was to disabuse investors of the safe-haven trade, in which it succeeded.

There is little such appetite for gold bullion today so a similar move is probably viewed by central banks as unnecessary; but if the gold price was to move significantly higher attempts to defuse the rise are less likely to succeed because there are very few sellers in western markets and the short positions on Comex in the Managed Money category start at record levels.

Alasdair MacLeod
for The Daily Reckoning

P.S. I originally posted this article, right here, at GoldMoney.com

Editor’s Note: Nothing lasts forever. And that’s especially true for paper currencies. When the dollar finally goes the way of the dodo, will you be prepared? Sign up for the FREE Daily Reckoning to receive expert advice on how to secure your finances no matter what happens to the “almighty dollar.”