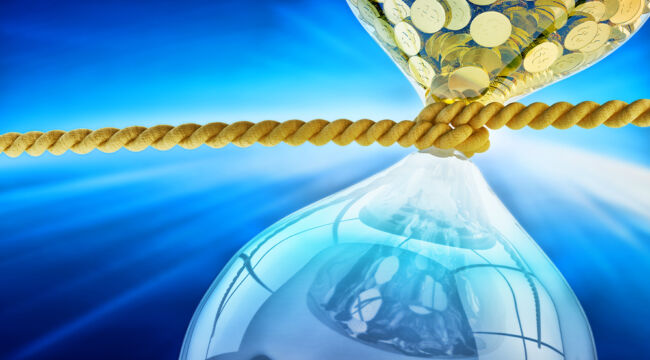 The Slow Strangulation of the World Economy

I was visiting with a friend recently and she was recounting her early panic over COVID. She has kids and loves them. As a mom, she believed her first duty was to protect them from the bad virus that was floating around. She went into full freak-out mode, keeping the kids indoors and spacing them out. Her heart never stopped racing.

One day, she looked out her window and saw that her neighbor’s dog was loose on her front lawn. She ran outside and started screaming at her neighbor to get that dog off her lawn immediately and never allow such an outrage again. Why?

Because she had heard on CNN that dogs carry Covid. She believed that the dog was spreading Covid around and that this would waft through her windows and infect her kids.

Now, this is a brilliant woman, educated at a prep school that no normal person could afford and attended a top school before becoming a partner in a firm that serves only high-end clients.

Moreover, she is herself brilliant and stable, and not politically left-wing at all. She is sober and strong. But Covidophobia snagged even her. Simply amazing.

I had not remembered the weeks during which we were supposed to hate on people’s pets. We can add that to the endless litany of nonsense we’ve been through.

Why the attack on pets? Well, the frightening Fauci in August took a day or two to work with his co-author from the National Institutes of Health on an academic article explaining the bigger picture. The problem, they explained, began 12,000 years ago. That’s when humankind started farming, killing land animals, and moving around from place to place.

That caused disease to spread! So they say. It only got worse once we got to cities. Then everyone started mixing. Icky germs were everywhere. Next thing you know, we spread smallpox and cholera and god knows what else.

Humankind was dooming itself with its ridiculous ambition to do more than live in a hut by the river and grab fish to eat! We are very, very bad.

That’s the origin of COVID, they wrote, which is why we need a “new infrastructure of human existence.” This will require emptying out the cities, getting rid of pets, abolishing large events, and forbidding people from meeting in groups in restaurants and things. Only once we massively reduce the population and go back to a state of nature can we fully conquer disease.

This is their vision. It’s pure insanity. Worse than Marx. Worse than anything even the nuttiest philosopher from the ancient world ever wrote. Worse than the devil himself.

It’s truly hard to imagine how it came to be that this pest ended up dismantling the whole of the Trump administration. He was the terrifying guru that even Trump could not swat away. As a result, Trump fell in the polls and lost, taking the House and Senate with him. The economy was wrecked. The Constitution was abolished.

Now we have terrifying inflation without end. In many parts of the world, people are having to choose between eating and heating. School kids are behind by two years. We’ve lost three years of lifespan just in the U.S. The whole country is utterly bankrupt. Trade is wrecked. Business is demoralized. 5.8 million people are missing from U.S. labor rolls right now.

What an unspeakable disaster. Even writing this, it sounds like fiction. It’s not. It’s our reality, and it is getting worse by the day.

Media won’t discuss the fullness of the calamity. Mostly we just pretend as if life is normal. What else can we do? Well, there are substances we can take, and millions take them if only to lessen the pain. They lead to early death. Excess deaths are through the roof right now, as ill-health spreads across the land.

Oh, but won’t the Fed save us? They are raising interest rates. The 30-year mortgage is at 6%. The demand side of the housing market is in free fall. The supply side is suddenly flat. Prices are still rising. This is what an inflationary recession looks and feels like.

I’ve never been one for conspiracy theory but one would have to be stupid not to see that there is something of a plan here. They are attacking cities, enterprise, economic growth, and even procreation too. How? In every conceivable way.

I’ve given up trust, all trust, in these people, their plans, and even their products. They are dangerous. Their vision of the world is even more so.

We used to say that socialism cannot work. What does that mean? It means that it will only make people poorer and more miserable. But what if you have an ideology that is actually intended to do that? Can Faucian economics work? Yes, if you mean to reduce the population, spread misery, end progress, abolish all comforts, empty the cities, cause people to freeze to death, and only allow what’s left of the population to live off bugs.

We need to get real. These people are truly up to no good. They have gotten their way. What’s more, the gang that did this is not subject to the voters, so elections might not make a bit of difference, even if they turn out well.

The Root of the Problem

The real problem is much more fundamental. It is structural. It is philosophical. It can be defeated but not through the usual ways. In the meantime, we really need to wake up, all of us, and recognize that nothing is normal anymore.

Surviving this period in history will require cleverness and courageous action. We simply cannot ignore the trends all around us and expect to survive.

It’s bad enough to realize the utter stupidity of the policies that are wrecking the world. It’s worse suddenly to realize that they are not stupid at all but rather the product of a diabolical mission to ruin civilization itself.

But in truth, it is all deliberate, I’m sorry to say. The people who run the world today have no interest in a thriving social order and civilization.

The means to survive them is to outsmart them.