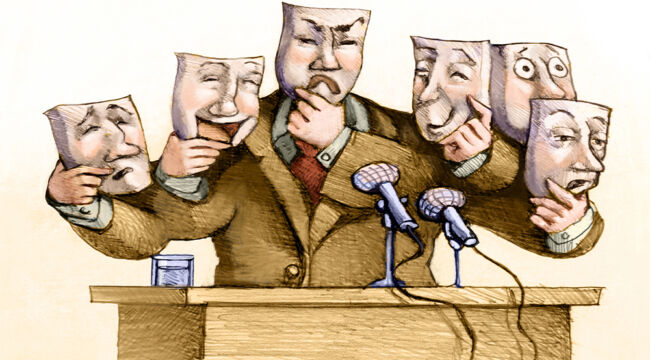 The Sad and Strange Life of a Politician

A man hunting high office is a man to be watched. And the higher the office he seeks, the closer he must be watched. For this is an ambitious man. And as one fellow who raged with ambition — Napoleon Bonaparte — stated:

Those endowed with (great ambition) may perform very good or very bad acts. All depends on the principles which direct them.

We generally place our money on “very bad acts.” That is because we have canvassed the history books. Yet a man after high office — in a democracy specifically — is also a man to be pitied. Why pitied?

All dignity, all honor, all pride, he must sacrifice in exchange for power. That is because he must face election. Consider the roles that must combine in him:

He must be a magician pulling rabbits from top hats. He must be a seller of pre-owned — that is, of used automobiles. He must likewise be a street beggar. He must beg for the franchise of those whom he considers his lessers.

After all… if they were not his lessers they would not require his leadership.

And so you have the aspirant of high office — by turns showman, confidence man and beggar. Thus this man is a preposterous formula — a man to be both feared and pitied at once.

But who respects a follower? Not his leader.

What Politicians and Salesmen Really Think of You

A political candidate and a salesman are brothers. The one solicits your trade, the other your vote. Each pitches his whim-whim at you until he fetches his game. Assume you end up in the bag.

He is thrilled to have your sale, to have your vote. But he merely regards you as a means to a rewarding end. He disesteems you inwardly. Behind his flashlight smile he disdains you. You have been duped by his razmataz.

He regards you as an all-day sucker. Who then does he respect?

An Intoxicating yet Horrifying Power

Picture our office-seeker in his natural habitat. He stands upon a podium gazing out upon a rustling crowd. What does he see?

He does not see individuals. He sees rather a vast, undifferentiated mass. That is, he sees a forest — but no trees. Or to switch metaphors: He is addressing a wheat field. His whoops and shouts raise a mighty breeze. The entire field sways in the wind, this way then that way, back then forth… on his command.

He is at once intoxicated by the power he wields over the great human mass, yet horrified that it can be so easily throttled up. It is fearsome to behold.

Our candidate must also appear directly among smaller chunks of this human mass. He considers them his inferiors, yet pretends to be their equals. Their equals? No — their servant!

He must visit factories and feign interest in their goings-on. Though he despises others’ children he must plant kisses on infant foreheads. He must attend local eateries, munch bad food and battle bellyaches while shaking countless hands and jabbering with idiots.

Invariably, a man takes him by the ear and will not let go. He babbles about his family, his job, his bowling trophy. All the while he longs to be loafing on his sofa in his underwear, looking at the television.

The sufferings he must endure in pursuit of power!

Enduring his terrific breakfast, he is tortured further by the realization that he must repeat the act at lunch in Columbus and dinner in Wilkes-Barre. Then there is tomorrow in Ocala, Macon and Raleigh.

It is dreadful business.

The Price to Pay for Power

In his private moments, in the silent watches of the night, he wonders if it is all worth it. He decides — begrudgingly — that it is. Such is his lust for office. It simply overwhelms and envelops him.

He assures himself it will all be a distant memory once he is secure in office. He will then be free to renege on all the promises he had made to those half-wits and quarter-wits on the campaign trail…

“Don’t these people realize that they’re being used as political pawns? Do they think that eating pancakes with me and telling me about their mother is going to somehow influence me?” Let us assume our seeker of high office has pulled enough wool over enough eyes… and wins the election.

But his reprise is brief. In two years or four years or six years, he will seek reelection. And the entire process must begin anew. Only next time his cynicism has doubled — no, tripled. The political process has worn the very soul out of him.

Yet he is consoled and soothed by this one central fact: He has grown extremely wealthy being a humble servant of the American people. As we indict this morally bankrupt fellow, we must nonetheless turn and face a mirror.

“Every nation gets the government it deserves,” said 18th-century French philosopher Joseph de Maistre. We must conclude that we deserve the scoundrel above described — and others like him. The admission brings pain, yet truth often does.

Is there a way out?

Another long-deceased Frenchman — Monsieur Étienne de La Boétie — holds out one potential escape, for those in search of one: Inaction. Inaction breaks the politician’s spell. That is, action is not required — merely inaction:

You can deliver yourselves if you try, not by taking action, but merely by willing to be free. Resolve to serve no more, and you are at once freed. I do not ask that you place hands upon the tyrant to topple him over, but simply that you support him no longer; then you will behold him, like a great Colossus whose pedestal has been pulled away, fall of his own weight and break into pieces.

Perhaps the time has come to abandon the ramparts, lay down the muskets… and twiddle the thumbs…

To reclaim our power, perhaps it is time for inaction.