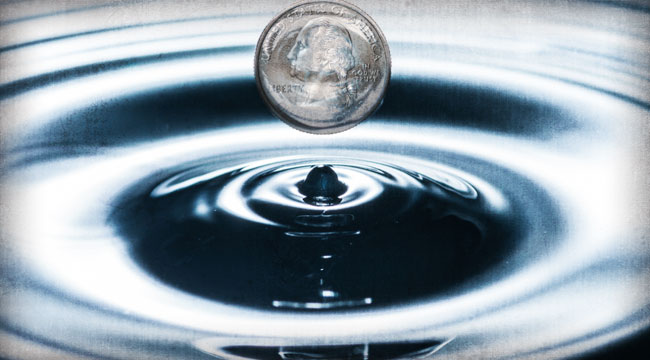 The Ripple Effects of the QE Debt Binge

“Financial crises are not predictable, though the buildup of fragility is observable.” — Gary Gorton, economist and author of Misunderstanding Financial Crises: Why We Don’t See Them Coming

“We have been trying to push down interest rates, particularly longer-term interest rates. Those rates do matter to the valuation of all assets… stocks, houses and land prices. And so I think it is fair to say that our monetary policy has had an effect of boosting asset prices.”

And thus did Janet Yellen, newly installed head of the Federal Reserve Bank, speak with understated candor before the House of Representatives in her first Humphrey-Hawkins address. She only confirmed what she could not deny.

A thoughtful investor has to wonder what will happen when the Fed no longer wants to push down rates anymore. For symmetry, it is hard to beat the idea that everything it goosed up will then come shimmying down.

Markets are never so neat. And the specifics matter. What, exactly, has been propped up the most? And what might suffer the most upon a reversal? This morning’s letter is an effort to disentangle the effects of QE’s unwinding.

Quantitative easing, or QE, is the silly name the Fed gives its efforts in price fixing of interest rates. The Fed buys Treasury bonds and mortgage-backed securities. As it does so, its balance sheet swells. Many are the asset prices that have risen right along with it, too.

A Merrill Lynch report points out some of the asset prices that have moved in step with the Fed’s balance sheet. These include U.S biotech stocks as well as the Nasdaq (heavily weighted with many tech stocks).

Take a look at this next chart, from Merrill. Remember, a correlation of 1 means the two things move identically. The lower the number, the less the two move together. Here, you see a 0.94 correlation between the Nasdaq and the Fed’s balance sheet since easing began, versus only 0.35 before. 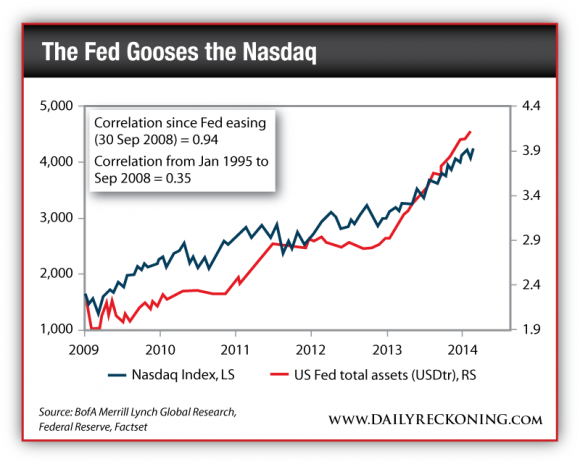 You find a similar story with biotech stocks — a correlation of 0.92 since Fed easing. But QE’s effects are not limited to U.S. stocks. It also has affected global asset prices.

And so you find emerging-market gaming stocks and Internet stocks leap to the QE song. So do property prices in Hong Kong, Indonesia, South Africa, Malaysia, Sydney and London.

QE has also set off something far more insidious…

Low U.S. interest rates provide an incentive to borrow low-yielding U.S. dollars and buy higher-yield foreign currencies and assets. In the next chart, you can see the surge in U.S. dollar loans in emerging markets since QE. 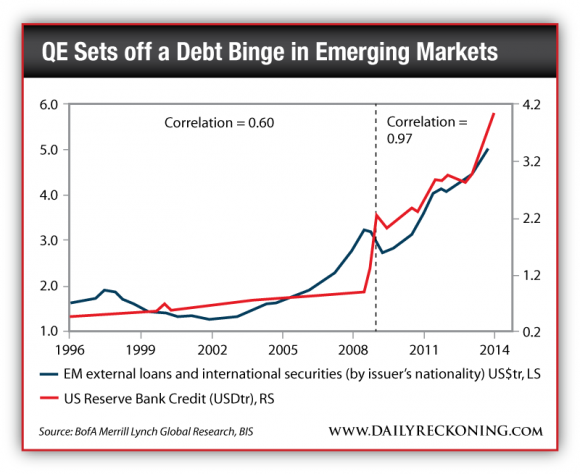 Since 2009, U.S. dollar debt issued by emerging markets summed to $724 billion, according to official balance of payments data. But this undercounts the real amount by 44%, says Merrill: “If an Indian firm borrows USD debt from a foreign bank branch in Mumbai, that is counted… but if it raises a USD bond in London, it is not.” Correcting for that, the real number is over $1 trillion.

This reveals deeper pricing vulnerabilities in the global financial system. It shows a potential credit bubble. We have seen this movie before. As Merrill notes: “Emerging-market banks and corporates have gone on an international leverage binge, yet another carry trade, the third in 20 years.”

The first one financed an East Asian boom that ended with the Asian Crisis in 1997. The second one was banks and investors supporting massive expansion in the so-called BRICs (Brazil, Russia, India and China). That ended in the financial crisis of 2008.

In its essentials, the latest is just a twist on an old story of a credit-driven boom. It can be hard to tease out what is a real growth story and what is simply the result of easy money. Investors get caught up in the apparent prosperity, but forget its unreliable foundations. Credit conditions eventually do turn. And the credit bubble then unwinds.

Now we have the Fed telling us it will look to raise rates by mid-2015. An easing cycle seems to be drawing to a close. Be wary of carry trade-driven asset prices is the message here. Not all emerging markets have levitated on an air cushion of QE-driven easy credit, but most have.

The above may seem bleak, but I think it is an important to warn you of the fragility in the market. No one can predict the timing of the next financial crisis. And there are ways the party may go on for longer (say, if the Fed renews its QE efforts).

Besides, not every asset price has gone up since QE. This morning, I was looking over a list of the cheapest stocks in the U.S. market based on tangible book value. It is a striking list. There are several shippers, gold stocks, coal miners and oddball troubled issues. No QE-driven boom here. These extreme values have extreme risks. But the point is that there are still things to do.

In the meantime, thank the Fed for kicking off another asset bubble. Yellen said the Fed “tried to look carefully at whether or not broad classes of asset pricing suggest bubble-like activity.”

The Fed hasn’t found any evidence of that yet, Yellen said. When it does, it will be too late to do anything about it.

Ed. Note: To make sure you’re well prepared before anything happens, sign up for the FREE Daily Reckoning email edition. In today’s issue, readers were treated to a unique chance to discover Chris’ newest investment opportunity. And it could be just what you need to insulate your wealth from the Fed’s next bubble. Sign up for FREE, right here, and never miss another great opportunity like this.