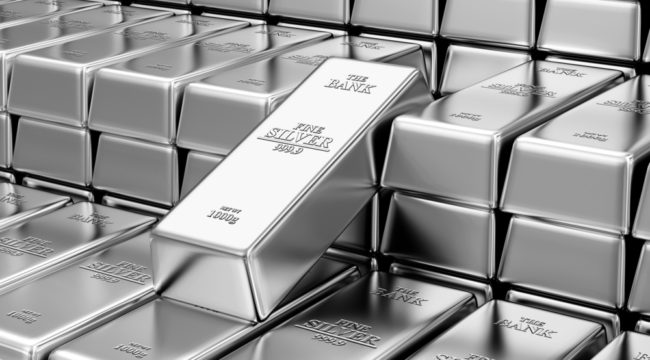 The Resurgence of Silver

Silver backed off a little in early 2021 (it’s now trading around $25.25 per ounce), but it has held onto almost all of its 2020 gains. Of course, the question for investors is: Where do we go from here? 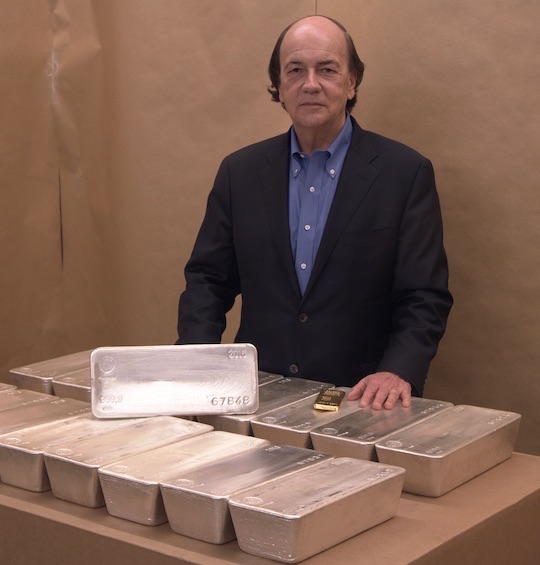 Your correspondent with a pallet of 1,000 ounce (about 62.5 pounds) silver ingots in a vault in Switzerland. The walls of the vault are draped with brown paper in order to avoid revealing security details or possible clues to the location. The silver is pure bullion: 99.99% silver. The date the bar was poured, serial number, purity and name of the refiner are all clearly shown stamped on the ingots. At current market prices, one of the silver ingots is worth $25,000. By way of contrast, the small gold bar (seen in the photo near my left hand) is worth about $65,000.

For reasons explained below, investors should expect continued strong outperformance by silver both in bullion form and in the form of shares in well-run silver mining companies.

Before turning to the fundamentals that will send silver prices higher, it’s useful to clear away some of the fog and outright myths surrounding the role of silver in the monetary system and the relationship between the price of silver and the price of gold.

Silver-to-gold comparisons are apples-to-oranges despite the fact that both silver and gold are elements and precious metals.

Let us begin by looking at a simple fact: while silver and gold are both precious metals, silver is a commodity, and gold is not. This statement surprises many readers, but it’s true. The difference turns on the definition of a commodity.

Silver is a commodity used in many industrial processes, including water purification, tableware, solar panels, electrical contacts, X-Ray film, mirrors and medical instruments. It’s the best electrical conductor of any metal. It is also used in automobile emission control equipment. All of these industrial and scientific applications qualify silver as a commodity input.

Gold is not good for much of anything except as money. Yes, I know that gold is mined from the ground like other commodities, and it is traded on commodity exchanges, but it’s not a commodity.

There are some specialized applications such as coatings for space helmets and ultra-thin wires made from “five nines” gold, but that’s about it. Jewelry is just bullion that you can wear; it’s not a generic input. Gold is only good as money. Still, it’s the best form of money.

Of course, silver also performs as a precious metal (along with gold, platinum and palladium), and it has long been used as a form of money in coins and bars. The U.S. dollar itself was based on the older Spanish dollar, also known as a piece of eight (in Spanish: Real de a Ocho).

And, that history points to the difficulty of valuing silver and forecasting its price. Silver is both a form of money and an industrial commodity. Its monetary price responds to the same factors as gold, including inflation, interest rates, flight to safety and the exchange value of the dollar.

At the same time, silver (but not gold) responds to the business cycle, since more or less silver may be needed for industrial processes as the economy is either in expansion or contraction.

This hybrid role for silver can often be frustrating for investors who see gold surging while silver marks time. They may be quick to allege price manipulation in the silver market. The reason is much more mundane, involving only supply and demand for industrial commodities.

Another myth about silver prices involves the infamous “sixteen-to-one” ratio of gold to silver prices. Silver advocates suggest that the price of gold should not be more than 16 times the price of silver. They base this on a misreading of history and law.

Today gold is $1,842 per ounce, and silver is $25.24 per ounce, which yields a ratio of about 73-to-1. If you believe that the appropriate ratio is 16-to-1, then the price of silver would have to be $115 per ounce, assuming gold is unchanged. The silver bulls make this case and suggest that only market manipulation is keeping silver away from that $115 per ounce target.

The entire 16-to-1 argument is nonsense. It’s a popular talking point among some silver aficionados, but it has no economic significance whatsoever.

With that said, there’s no doubt that the price of silver is influenced to some extent by the price of gold. While the two do not move in lockstep, and while there is no necessary ratio between the two prices, it is the case that the factors that drive gold prices higher (inflation, low interest rates, flight to quality) will also drive silver prices higher.

Given silver’s recent outperformance and the tailwinds provided by the surging price of gold, what are the prospects for silver prices in the months ahead?

Right now, my models are telling me that silver is set to have another strong year to follow the surge of 2020. The basis for this can be seen in Chart 1 below. 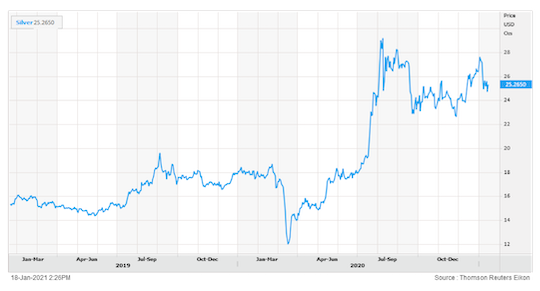 In 2020, silver followed the same pattern as gold and stocks. It began the year with a slight gain, crashed during the worst of the pandemic panic, rallied back to new highs and then held those gains while trading in a fairly narrow range. The high for silver was $29.15 per ounce on August 10, 2020, just a few days after gold hit its high for the year.

What are the factors affecting the price of silver going forward?

We should expect geopolitical stress as North Korea, China, Russia and Iran are all expected to test the resolve of the new Biden administration. This does not mean war will result, but it does mean we can expect hot spots to become tenser.

This list of hot spots includes the Taiwan Strait, the South China Sea, the Straits of Hormuz, Ukraine and the Korean peninsula. Our enemies will probe in all directions to see if Biden will stand firm or give ground. This expected tension is bullish for the prices of precious metals.

Interest rates will remain at zero (for short term rates) and 1% or less (for long-term rates) through all of 2021. That’s bullish for silver because silver competes with interest-bearing instruments for investor dollars. Lower interest rates tilt that competition in favor of silver.

The dollar should remain weak due to zero interest rates and weak economic growth. Don’t believe the narrative about a V-shaped recovery and pent-up demand. The economy is locking down again because the pandemic is worse now than it was last spring. Small business is being destroyed, and unemployment is rising. With credit losses emerging, silver becomes a safe-haven.

Finally, the Biden administration and its Secretary of the Treasury, Janet Yellen, have embraced Modern Monetary Theory in all but name. This means a $3 trillion deficit in fiscal 2021 on top of the $4 trillion deficit in fiscal 2020. The Federal Reserve has chipped in with $4 trillion of money printing in the past year. Even if inflation does not emerge immediately, inflationary expectations are on the rise. That’s also bullish for silver.

All of these factors – geopolitics, interest rates, exchange rates and inflation – are set to boost the price of silver in 2021.