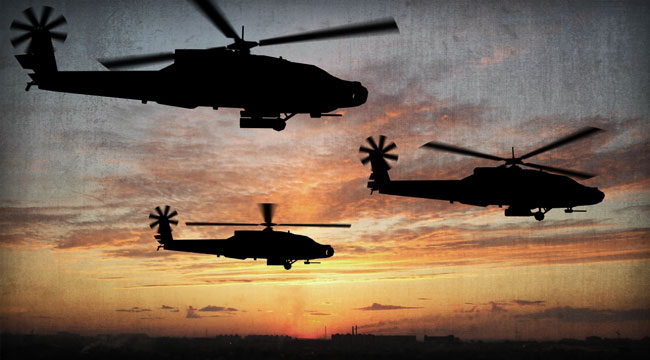 A lot’s happened in the Middle East since I wrote about how to play the meltdown two weeks ago in The Daily Reckoning email edition.

So, today I’m going to give you a must-read update on the meltdown so you can know where your resource investments stand.

Before we dig in, though, I should pat you on the back…

For seven years I’ve been editor of the Outstanding Investment newsletter. During that time I’ve written countless articles about how ethnic and religious issues in the Middle East and North Africa (MENA) are leading to regional breakdown. We’ve dubbed the scenario “Oil Wars” in the past.

If you’ve been following the DR for that long, you’ve no doubt read about it and are ahead of the crowd on this meltdown. You’re also way ahead of politicos who jawbone about “energy policy”.

In terms of gains, readers who have taken my advice have seen double digit gains like 38% and 33% on “safe haven” oil plays this year. Plays like Halliburton (NYSE:HAL) and Baker Hughes (NYSE:BHI) to only name a few. Congrats if that’s you.

If not, don’t worry. There will be plenty more opportunities where those came from. In fact, I’ve just put the finishing touches on a roadmap to oil riches. It’ll help you keep big sized oil gains rolling in. Just keep reading.

You see, in June, we saw the next chapter of our “Oil War” thesis unfold.

There was almost daily news of Iraqi forces retreating in the face of attacks by the terrorist group ISIS. In essence, the Iraqi government surrendered vast territory, leaving ISIS running a zone of control about the size of Great Britain. This map shows one estimate of areas overrun by ISIS. 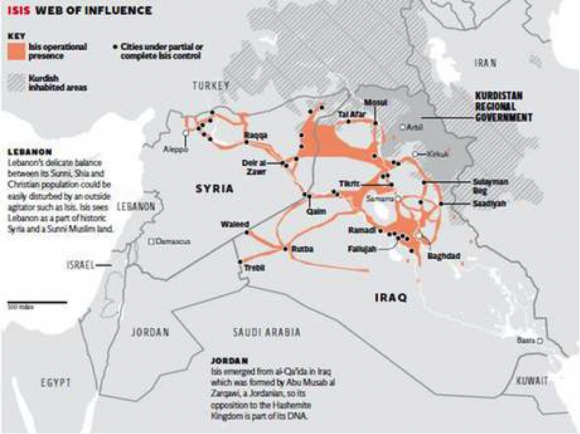 Don’t be misled by the large, gray-shaded area in western Iraq, versus the skinny, thin reddish lines. The gray areas are mostly empty desert, and not worth “occupying” in the sense of putting boots on the ground. In this region, the nature of combat is that ISIS fighters drive hither and yon in pickup trucks. There are no “front lines,” so to speak, other than roads.

ISIS’ mobility has been a tactical force-multiplier. Meanwhile, at the operational level, ISIS has rolled up large swaths of strategic real estate, and more importantly, begun to impose governance from the ground up. Somebody has a plan.

By most reputable accounts, the government of Iraq has been utterly humiliated on the battlefield. The Iraqi government has also lost much face in the also-critical realm of the media and propaganda war. That is, Iraq’s government looks like a bunch of losers, and who wants to associate with losers?

U.S. policy towards ISIS and Iraq has been reactive, although I’ve been told — by people who do this stuff for a living — that field-level intelligence reports within the U.S. chain of command have generally been foresighted. It’s just that the U.S. has too many “C-Team” players making decisions at high levels. All that, and raw politics don’t favor much in the way of a U.S. “kinetic” presence in the Middle East.

Filling the vacuum, in the past couple of weeks we have reports of support for Iraq from Iran, to include Iranian military forces on the ground, intelligence specialists and even drone aircraft — which I’m sure look quite a bit like U.S. drones. Such a coincidence!

Then there’s Russia. In June, over a matter of days, the Russian government cobbled together a quick deal to supply ground attack combat aircraft to the Iraqi government. These are tough, powerful Su-25 “Frogfoot” attack aircraft — similar to the U.S. A-10 “Warthog.” Here’s a photo I took of a Su-25, a few years ago, during a trip to Russia.

Apparently, the Russians simply commandeered jets straight from operational military units in Russia and Belorussia. Within hours, the Russians loaded the aircraft, spare parts, test equipment, ordnance and other support materials onto transport planes. All that, and there are — reportedly — “retired” Russian pilots and techs who will initially do much of the flying and fixing.

Of course, Iraq will need all the bombs it can drop on target to protect its capital city… and the oil fields. In the past month, perhaps 10,000 ISIS fighters have moved crisply, and near-unopposed, towards Baghdad.

Along the way, ISIS collected — as one highly experienced U.S. Marine noted in a blog last week — “new and slightly used combat equipment to include rifles (only dropped once), armor, artillery and aviation assets.”

Will Baghdad stand? “No, not for long,” opines this battle-seasoned Leatherneck.

In the past few days, I’ve seen reports that Iraqi troops are holding ISIS fighters at bay, in suburbs and other regions outside Baghdad. ISIS is taking casualties, and how long can it hold up?

One former U.S. Army intelligence officer wrote to say that, in her view, ISIS forces are biding time, building up supplies and stockpiles. ISIS is moving carefully into position. The ISIS goal is to stage a modern version of the 1968 Tet Uprising, of Vietnam fame.

Wreck Baghdad, shock the Iraqi state and — a truly key goal — stage a massive assault on the U.S. Embassy in the Green Zone. It’ll be Saigon, 1975, to continue the Vietnam analogy, but on a much larger scale. That’s the plan, anyhow.

Another former-military acquaintance believes that many U.S. troops heading to Iraq — along with an unheralded, small army of well-conditioned civilians, with short haircuts (ahem…) — are destined for that very same Green Zone. Their mission is to rig defenses, defend the place and destroy as much classified material as possible in the event that the site is overrun. A Green Zone Alamo, perhaps?

As you can imagine, the Iraq conflict has spooked global oil markets and almost instantly added $8 to $10 to the price of a barrel of oil. The nation’s output in February — 3.5 million barrels of oil per day will almost surely go away, and we may not see that number again for another 35 years, if ever in our lifetime.

The escalating havok spreading across the region virtually ensures that things will get worse. Closer to home, you’ll soon pay 20 or 30 cents more per gallon at the pump.

Good thing we have fracking in the U.S., huh?

Good thing we have fracking in the U.S., huh?

While the rest of the world has experienced declining oil output, the U.S. has shown remarkable improvement in oil production. Indeed, the 3 million barrel per day U.S. increase, of the past five years of fracking, is about equal to… well… the output of Iraq.

Rising energy prices, of course, have a way of making people mad. Here in the U.S., bellyaching about the price of fuel is a national past-time. Now consider what that same price shock means in less affluent nations — emerging economies across the world. It’s not hard to imagine, say, China looking with great concern at these upstart ISIS troublemakers.

Also, ISIS may have made a major blunder this week. Out of the blue, ISIS boldly declared itself as the so-called “Islamic State,” successor to the former Ottoman Caliphate. ISIS now claims jurisdiction over Muslims everywhere, in at least 57 other countries that follow the Islamic faith. In fact, just this week, an ISIS spokesman, Abu Mohamed al-Adnani, stated:

“The legality of all emirates, groups, states and organizations becomes null by the expansion of the Caliph’s authority and the arrival of its troops to their areas.”

Oh really? That might just tick off the leadership cadre of about… oh… 57 other countries. Says who? Says ISIS? And who made your guy the Caliph, exactly, effendi?

In essence, we’ve got a major-league, religious civil war brewing. Looking back, seeds of Sunni revival — now evolved into ISIS — were planted in Egypt in the 1920s, when the Muslim Brotherhood formed.

Later, in the 1970s and 80s, the flow of petrodollars to Islamic lands –particularly to Saudi Arabia — enabled the Sunni Wahhabi sect to build mosques and madrassas all over the world, and spread the militant side of Sunni doctrine. Now we live with religious-based chauvinism and violence on a global scale.

There’s a continental scale, geopolitical disaster occurring across MENA. It’s as if a major political-social-demographic-religious-military dam has burst, sending downstream a flood of history and grievance. Day by day, we’re watching the Oil Wars scenario unfold.

These days, our centuries-old political world-view is under assault.

We’re early in this game, overall; it’s early innings with ISIS, the Caliphate and more. These days, our centuries-old political world-view is under assault.

One key takeaway, here, is to stop thinking like you live in a mere continuation of the 20th Century. It’s time to frame your investment decisions within this new view of how the world works.

Not to put too fine a point on things, but the last 500 years of “Western” direction to history are unraveling fast. We’re living through an expansionist, oft-violent reawakening of Sunni Islam, and much more in other parts of the globe.

Luckily here in North America, things are looking up. Looking ahead, I foresee more running room for oil companies here all thanks to fracking.

For resource investors, that should make the global tumult much easier to stomach. Sure, the critics will bellyache about drilling, well-pads, roads, pipelines and such. It’ll get nasty, because the critics have — in essence — been wrong.

I’ve said it before and I’ll say it again. If we had deferred fracking, and the whole industry had declined to advance, we would not have the oil or gas we do today, and we’d be screwed.

P.S. Luckily we have been been fracking for several years now. And the results are staggering — both from a production side… and from an investment side. In fact, early believers in the resurgence of the US oil industry are sitting on millions — and in some cases billions — of dollars in profit. That’s the good news. The great news is that this story is just beginning. And that means there are still plenty of incredible opportunities for you take profits as the US oil boom progresses. I’ve already clued-in a handful of Daily Reckoning email readers to what I see coming for this space. If you’d like a chance to join them, sign up for The Daily Reckoning email edition, for FREE, right here.