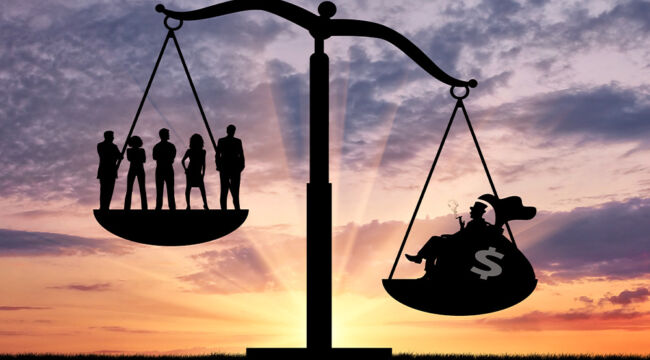 The Real Source of Inequality

“WAGES for the top 1% skyrocketed 160% since 1979,” reports the left-slanting Economic Policy Institute (EPI).

What of the 90% beneath them… who hew much of the nation’s wood… and draw most of its water?

That is, 90% of America’s wage collectors have guttered along, while its top earners have gone skyshooting past them… showing them their dust.

But why? Is it because the 90% climbed down the ladder of social mobility in 1979 — and loafed?

We do not believe that is the answer, no.

The article itself offers no answer. It merely reports the temperature of American labor. It does not diagnose the malady.

Have the 90% wallowed because globalism shipped the better jobs overseas? Is it because immigration waves have washed away the value of their labor? Is it merely the natural way of capitalism?

Today we attempt to penetrate the mystery…

The Plodders vs. the Speeders

But in 1940, the plodders began to overtake the speeders.

These long shots pulled away over the next three decades… by lengths and lengths… and furlongs by the early 1970s.

In the early 1980s, the fleeter horses made their move, their dramatic move.

The top 1% ran down the exhausted 90% by the early 2000s. They have since extended their lead, the plodders fading.

Here is the picture of income inequality, stretching to 1917. Please note the reversal beginning in the early 1980s:

What other multi-decade trend commenced in the early 1980s?

The answer is declining interest rates — including the federal funds rate — which the Federal Reserve sets directly.

That is, income inequality has increased as interest rates have decreased. Is this coincidence?

The income and wealth inequality that now plague us are, to a great degree, the result of persistently and artificially low interest rates. This goes back long before the Great Financial Crisis… rates have been generally falling since the early 1980s. I think it is not coincidence this is the same period in which… the gap widened between the wealthiest Americans and the middle class.

But why do artificially low interest rates extend the gap?

Interest rates are the price of money, and money helps you make more money. Hence, lowering its price is a gift to those who are in the best position to invest it…

Until recently, the most sophisticated “investing” most Americans did was to have a bank savings account or maybe a certificate of deposit. And for a long time, that was enough. An average person could save a little of every paycheck, make risk-free 5% or 7% yields, and build up a nest egg or the down payment on a house. That is now impossible. You are lucky to get 0.1% from your bank…

Those same low interest rates encourage speculation that raises asset prices, particularly for housing. So lower-income people have to spend more just for a place to sleep…

Similarly, low interest rates subsidize job automation. In the long run, that’s actually good for workers, but in the here-and-now it eliminates jobs and suppresses wages. So the middle class finds itself making less and spending more. That can’t go on indefinitely

The “Financialization” of the United States Economy

Wages wallow — and the middling classes with them. 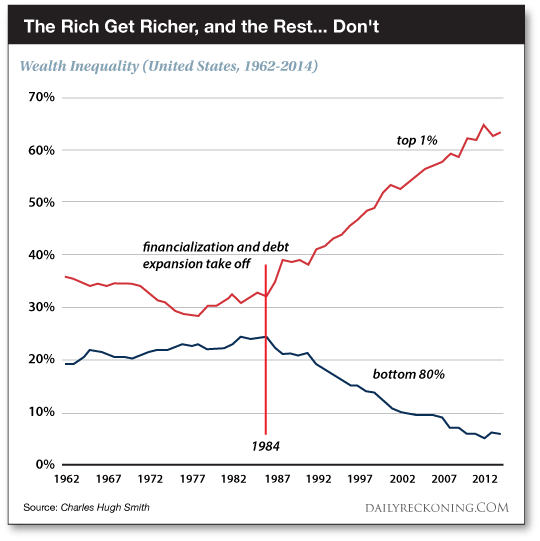 Old Nixon opened the way to financialization by scissoring the dollar’s final tether to gold in 1971.

Debt could then pile up without a practical limit.

The financial industry represented 10% of GDP in 1970. By 2010 it ballooned to 20% of GDP, inflated by the helium of artificially low interest rates.

Good or Bad for the Economy?

The American economy had put aside its overalls and its lunch bucket… bought Armani suits, munched sushi… and headed for Wall Street.

It was after the fast buck — the easy buck.

But is financialization economically destructive?

Yet economists Gerald Epstein and Juan Antonio Montecino have slaved over the numbers. These numbers reveal that financialization is, in fact, destructive. Since 1990…

They conclude the financial sector has drained trillions and trillions from the United States economy. By next year, the true figure may exceed $22 trillion:

Yet these gentlemen settled upon that figure before the pandemic. We have seen no update. But we hazard it would be an even greater enormity.

Is the business sustainable? Does it menace the long-term safety of the American republic?

Historian Peter Turchin is the author of War and Peace and War: The Rise and Fall of Empires.

At the zenith of the Roman Republic, Turchin informs us that the wealth of Rome’s top 1% exceeded a commoner’s by 10–20 times.

At the time of Rome’s terminal imperial decline… that figure may have risen to 10,000 times.

America’s numbers are not so out of joint — yet. Nonetheless…

The vast bulk of the getting has gone to the asset-holding classes. The great American middle has given ground.

If trends continue… will the center hold?

1. Stagnating real wages due to oversupply of labor.

Please ask yourself, dear reader, if any apply to today’s United States.

Once again, we cite our co-founders, Messieurs Bill Bonner and Addison Wiggin:

“Empires have a logic of their own. That they will end in grief is a foregone conclusion.”

We do not pretend to know when the end will come — or the manner in which it will come.

We only hope the gods are merciful…