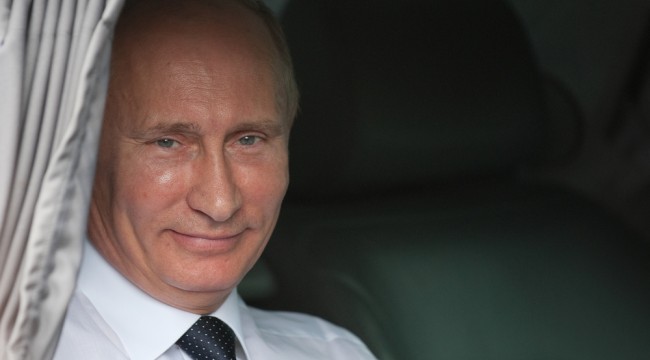 The Real Reason the US Media Hates Vladimir Putin

With few exceptions, the Western media and most strategists have been very unfair in their comments about Vladimir Putin and his response to the Ukrainian demonstrations. According to Stephen F. Cohen, professor emeritus of Russian studies and politics at New York University and Princeton (he is also the author of Soviet Fates and Lost Alternatives: From Stalinism to the New Cold War), there has been a “tsunami of shamefully unprofessional and politically inflammatory articles in leading newspapers and magazines” which portray Putin in a very negative light and fail to take into account some larger things happening in the region. Here&Now Public Radio’s Robin Young recently interviewed Stephen Cohen, who opined:

…for nearly a decade, the American media has so demonized Putin that we’ve lost sight of him, and we’ve obscured the possibilities that are there and that he’s offered to enhance, through some kind of steady, calm cooperation, American national security.…

I can’t remember any Soviet communist leader being so personally villainized[;] that is[,] we wrote bad things about Krushchev, about Brezhnev, about Andropov, but we disliked them because they represented an evil system. We didn’t say [they] themselves were thugs, murderers, assassins, which are words that we attach to Putin.…

The American media coverage of Ukraine is wrong and inflammatory from beginning to end. The media refers to The Ukraine and The Ukrainian people striving for Western democracy and capitalism. That’s false. Everybody knows that at a minimum, there are two Ukraines. One part of it, mostly in the west, wants to attach to Europe. The other part of it in the east, and partly in the south, wants to remain close to Russia….

And this is caused by ethnicity, language, religion, politics, culture. So now we come to the second thing: Who precipitated this crisis? People say Putin did it, or the Ukrainian president, democratically elected, by the way, Yanukovych. But I say no. Why did the European Union tell the democratically elected president of such a profoundly divided country, two Ukraines, in November, that he must decide either/or, you’re either with Europe, or you’re with Russia?

That’s a provocation, and that’s where this began. And here’s what’s not reported. At that moment, in November and December, what was Putin’s reply? He said hey, guys, why does Ukraine have to decide? Why can’t the European Union and Russia help Ukraine out of its terrible economic crisis? And the answer was, in Washington and in Brussels, no way. Ukraine must decide.

Cohen referred to the leaked conversation between the top State Department official Victoria Nuland and the US ambassador in Kiev, in which she dismissed the EU with the F-word, as further proof that the US wants a new anti-Russian Ukrainian government and is prepared to participate in a coup to achieve that end:

Stop and think how that story was covered in the American media. The first lead was oh my gosh, she said F the EU. The second lead was who leaked this story? Oh, it must’ve been the Russians. Look at those horrible Russians. But that wasn’t the story. The story is what the top State Department official said to the American ambassador in Kiev.

And what she said is you and I are empowered to form a new Ukrainian government. And they’re actually discussing who should be in this government. And the new government is going to get rid of the democratically elected president of Ukraine, Viktor Yanukovych.

Now we may hate Yanukovych. He may be a rat of the first magnitude. But in plain language, they were plotting a coup d’etat against a democratically elected president. And we know that in countries with fragile democratic traditions, when you overthrow an elected president, you are setting back democracy maybe decades [emphasis added].

When asked why, for nearly a decade, the American media has so demonised Putin, Cohen responded:

We in America have had three successive presidents who were by and large failures as foreign policy presidents. Nobody’s going to write a history of Clinton and say he was a great foreign policy president. Bush’s war in Iraq has tainted his foreign policy reputation forever. And Obama is not admired as a foreign policy president, whatever you think of him. Putin on the other hand has been an exceedingly successful national leader of Russia in foreign policy for 13 years. Mitt Romney said the other day in the Washington Post, that when it comes to representing a nation’s interest in international affairs, Putin has been a better president than Obama. OK, that’s politics, but it’s a plausible thesis. And you sense sometimes that Putin’s success has brought upon him this kind of vilification by the American media in particular. Now that’s a thesis. I don’t know. But we ought to think about it.

My friend Patrick McKim, who served in the US Navy and on the Armed Services Committee for Senator Pete Wilson (R-CA) on the Seapower and Tactical Warfare Subcommittees during the Beirut bombing incident (he also attended the Naval War College’s Strategy and Policy Course, holds a Harvard MBA, has a sizeable library of military and naval biographies and actions, and knows a lot of high-placed people in the military and in politics), recently sent me a piece entitled “Excerpt from a speech delivered in 1933, by Major General Smedley Darlington Butler, USMC”.

(For readers not familiar with Butler, I should point out that he was a Major General in the US Marine Corps, the highest rank at that time. At the time of his death in 1940, he was the most decorated Marine in US history, having received 16 medals, five for heroism.) In his abovementioned speech, General Butler said of interventionism:

War is just a racket. A racket is best described, I believe, as something that is not what it seems to the majority of people. Only a small inside group knows what it is about. It is conducted for the benefit of the very few at the expense of the masses. I believe in adequate defense at the coastline and nothing else. If a nation comes over here to fight, then we’ll fight.

The trouble with America is that when the dollar only earns 6 percent over here, then it gets restless and goes overseas to get 100 percent. Then the flag follows the dollar and the soldiers follow the flag. I wouldn’t go to war again as I have done to protect some lousy investment of the bankers.

There are only two things we should fight for. One is the defense of our homes and the other is the Bill of Rights. War for any other reason is simply a racket. There isn’t a trick in the racketeering bag that the military gang is blind to.

It has its “finger men” to point out enemies, its “muscle men” to destroy enemies, its “brain men” to plan war preparations, and a “Big Boss” Super-Nationalistic-Capitalism. It may seem odd for me, a military man, to adopt such a comparison. Truthfulness compels me to.

I spent thirty-three years and four months in active military service as a member of this country’s most agile military force, the Marine Corps. I served in all commissioned ranks from Second Lieutenant to Major-General. And during that period, I spent most of my time being a high class muscle-man for Big Business, for Wall Street and for the Bankers. In short, I was a racketeer, a gangster for capitalism. I suspected I was just part of a racket at the time. Now I am sure of it.

Like all the members of the military profession, I never had a thought of my own until I left the service. My mental faculties remained in suspended animation while I obeyed the orders of higher-ups. This is typical with everyone in the military service. I helped make Mexico, especially Tampico, safe for American oil interests in 1914.

I helped make Haiti and Cuba a decent place for the National City Bank boys to collect revenues in. I helped in the raping of half a dozen Central American republics for the benefit of Wall Street. The record of racketeering is long. I helped purify Nicaragua for the international banking house of Brown Brothers in 1909–1912 (where have I heard that name before?).

I brought light to the Dominican Republic for American sugar interests in 1916. In China I helped to see to it that Standard Oil went its way unmolested. During those years, I had, as the boys in the back room would say, a swell racket. Looking back on it, I feel that I could have given Al Capone a few hints. The best he could do was to operate his racket in three districts. I operated on three continents.

Ed. Note: Regardless of how you feel about Putin, there’s always more to the story than the mainstream media is willing to tell you about it. That’s why readers subscribe to the Daily Reckonig. Every issue gives you insight and analysis you won’t find anywhere else, and that includes relaying several profit opportunities in one easy to read email. Don’t let another issue pass you by. Sign up for the Daily Reckoning, for FREE, right here.