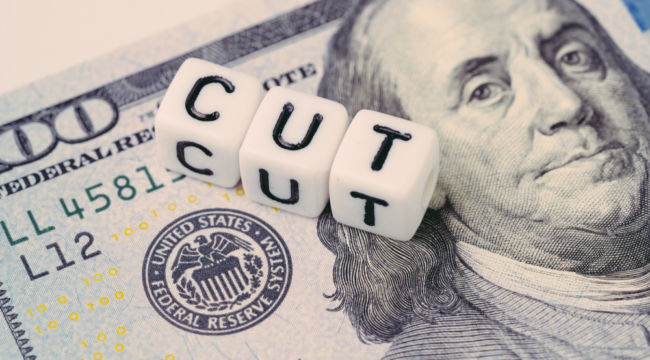 Why precisely did the gentlemen and ladies of the Federal Reserve lower interest rates yesterday?

(Here is one hint: It was not to “stimulate” the economy.)

That is, does yesterday’s rate cut nearly count double? And why does it matter so?

Questions, questions — so many questions.

Today we fare forth, gumshoes on feet, sleuth bag in hand… in search of answers.

First to the markets…

He declared the rate cut a mere “midcycle adjustment.” It did not imply additional cuts whatsoever, he insisted.

The stock market was expecting Powell to telegraph further easing.

It therefore staggered badly on his comments… and took the count.

It regained the vertical this morning. But by afternoon it was horizontal again, freshly pummeled.

He announced 10% tariffs on an additional $300 billion of Chinese goods. The wall goes up Sept. 1.

After wallowing early, safe haven gold gained $18.10 on the day.

But why precisely did Jerome Powell and his understrappers cut rates yesterday?

They forever howl that they are “data-dependent.”

Well then, come camp down with the data…

Unemployment runs at 50-year lows. And GDP jogs along at a passable 2.1%.

The Federal Reserve sweats, heaves, groans in pursuit of 2% inflation.

Look at the latest data.

Core inflation is up 2.5%. Producer prices are likewise on the jump, up 2.3% this past year.

And the stock market — incidentally — trades at record heights.

Put the numbers together, one atop the next or side by side.

If the Federal Reserve is so data-dependent… where are the data that shriek for a rate cut?

But these somber men and women take them very heavily.

How then do they square this impossible circle?

We must conclude yesterday’s cut made a cruel jest of the Federal Reserve’s “data-dependence.”

A fellow might even argue for a rate hike under the circumstances.

“The Most Pointless Rate Cut in Fed History”

Fed history takes in a vast territory. Why the most pointless?

“Easing rates in a ‘healthy’ economy pretty much at full employment with a ‘favorable’ outlook, where the only real problem is massively inflated financial asset bubbles.”

Why then the rate cut?

Yards and yards of explanation have come rolling from the financial media.

Some accept the Federal Reserve at its word. The United States economy may be an economic dynamo, they argue.

But the world beyond its shores languishes in doldrums. A rate cut forms a protective cushion against global weakness.

Did Powell Give Into Trump?

Others suggest Jerome Powell yielded to Mr. Trump’s repeated bludgeonings, that politics fetched him at last.

CNBC’s Steve Liesman even intimates the Federal Reserve might have feared for its very existence — if it did not succumb:

Think about what happens when a person gets up at a rally and starts railing against the Federal Reserve and starts to create what could lead to congressional pressure on the Fed and then you could imagine that there could be support for a different system. I think they think there’s a lot of political downside risk to getting this wrong.

But of course, the president yelled for a “large” rate cut. He did not receive one.

If Powell expected his pinprick rate hike to win Trump over… he badly missed fire.

“As usual, Powell let us down,” lamented the president.

We have no doubt he is all of them — and more.

But there are appearances to maintain.

Then why, again, the rate cut?

Might it have been the next shot in the currency war?

That is the answer, argues Jim Rickards.

“It’s All About Currency Wars”

Here Jim holds Powell upside down and shakes the answer from his pockets:

On the surface, a rate cut didn’t make much sense. Unemployment (officially) is at 50-year lows and the economy is chugging along: 2.1% second-quarter growth isn’t great, but it’s not terrible, either.

To justify the move Powell cited “the implications of global developments for the economic outlook as well as muted inflation pressures.” It’s true, the global economy is slowing by many measures. And inflation is still short of the Fed’s sustained target rate of 2%. But the numbers have improved a bit. The Fed has raised rates with similar inflation numbers.

But this rate cut has almost nothing to do with “stimulus.” It’s all about currency wars. The Fed wants to cheapen the dollar. The currency wars started in 2010 and are still going strong.

Jim finds support in The Wall Street Journal. From which:

The European Central Bank’s policy rate, at minus 0.4%, is already nearly three percentage points below the Fed’s. And last week ECB President Mario Draghi strongly hinted it will soon go further into negative territory. Fed officials have concluded they cannot permit U.S. rates to deviate too far from their foreign counterparts’. So even though the U.S. economy is in much better shape than Europe’s, the ECB is helping to force the Fed’s hand.

Perhaps they have hooked onto something here. The Federal Reserve is simply keeping pace in the currency war.

But did Jerome Powell effectively heave up a 40 basis point cut?

“Have no Fear, Liquidity Is Here”

Recall, quantitative tightening was being retired in September. But yesterday Mr. Powell announced an immediate halt. The August and September rounds are out.

The liquidity scheduled to come draining out of the financial system in August and September therefore remains on duty.

Estimates place QT’s impact at seven basis points of tightening per round.

With August and September QT shelved, a combined 14 basis points of liquidity stay on.

Add it to yesterday’s 25 basis points… and you have in essence a 40 basis point slashing.

Add two additional rate cuts to the end of QT. This Hayes fellow estimates markets may drink in 159 basis points of liquidity these next 12 months.

“Have no fear, liquidity is here,” he concludes.

But here is our fear…

That this additional liquidity will inflate existing asset bubbles to preposterous dimensions — stocks, bonds, real estate, to note some.

More and more money will go chasing after riskier and riskier assets.

That is, we will get more Wall Street. And less Main Street.