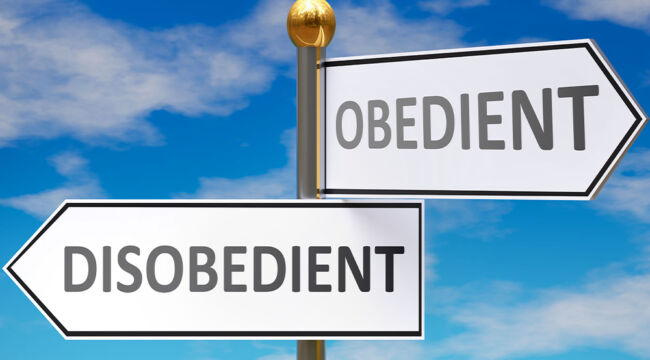 “A people enslaves itself, cuts its own throat, when, having a choice between being vassals and being free men, it deserts its liberties and takes on the yoke, gives consent to its own misery, or, rather, apparently welcomes it.”

We plucked this passage from his masterly work The Politics of Obedience by title.

We believe it enjoys high relevance in this, the 21st century. More from which:

It is incredible how as soon as a people becomes subject, it promptly falls into such complete forgetfulness of its freedom that it can hardly be roused to the point of regaining it, obeying so easily and so willingly that one is led to say, on beholding such a situation, that this people has not so much lost its liberty as won its enslavement.

Thus the frog goes into its pot of gradually heating water — and never jumps out.

It is not the erring that flusters us. Sincere men — men of good faith — can botch badly.

We are merely confounded and discombobulated that so many continue heeding them… and submitting to their blemished authority.

And why do so many have such blistering heat against those who point to holes in official theories, who announce that the emperor is well and truly nude?

Would they prefer to be foxed, conned and tricked — to believe the emperor is garmented?

These are the questions we tackle today…

Nor do we judge. A man shoots an accusing finger outward and three shoot back at him… as is said.

For light, we turn to Professor Mattias Desmet. This fellow professes psychology at Belgium’s Ghent University.

Coney-catchers, sharpers and opportunists — that is, political leaders — emerge in response, holding out salvation.

The people accept the outstretched hand. It soothes and comforts them.

Anyone who slaps away this hand is a hellcat, a hobgoblin, a menace to the public happiness.

Here the professor speaks of “Mass-Formation.” As summarized:

In Mass-Formations people become radically intolerant of dissident voices. This person threatens to wake the people up and they get angry when confronted by the initial anxiety and discontent they experience by challenges to the official doctrine.

The crowd directs all their aggression at dissident voices.

At the same time they are radically tolerant of their leaders who pronounce the mainstream narrative. These people can lie and cheat and do everything they want and will always be forgiven by the crowd. All the lying, dishonesty and misbehavior is seen by the crowd as doing it for their own safety.

We suffer the acquaintance of certain individuals who fit this description to a fare-thee-well… as perfectly and precisely as the size 10 foot fits the size 10 shoe.

They are generally pleasant and agreeable.

Tell them that these vaccines are not as safe or as formidable as the drummers claim.

Now you have a demon on your hands.

They will scourge you as a conspiracy theorist… a delusional… an imbecile… a witless dupe of the bedlamite fringe.

Here we speak with the invincible authority of personal experience. We know such gentlemen and ladies.

We had best keep the names dark, lest our attorneys receive a sharp note claiming character defamation.

No matter what you hurl against them, it bounces off unbreachable armor… spitballs off a tank.

They simply will not listen. They are sunk in a sort of intoxicating hypnosis.

And woe to anyone out to shatter the spell…

The resistance to understanding the narrative is false or wrong is driven by the fear of returning to the state of Free-Floating Anxiety and wanting to continue to experience the mental intoxication.

This explains why arguing based on facts will not work. Facts no longer matter to them. Given the facts, they are unable to come to sensible conclusions, even in their own best interests.

Here we believe the author lowers his hammer square upon the nailhead. We believe his thesis holds vast explanatory powers. It is immensely plausible.

Again: We do not judge or condemn whom we consider the entranced. They consider us entranced.

They are of course correct.

He accepts them as fact… though in honest moments he concedes he lacks all confirming evidence.

But let it go…

Our grievance is not with the entranced, but rather with the spellbinders who entrance them.

That is, with those who would wreck a society over a virus rate with a survival rate in excess of 99%…

With those who would decry the use of safe and effective drug treatments because they would harpoon the legal justification for experimental, emergency-use vaccines…

With those who would vaccinate young children, young children who face infinitesimal risk of sickness or death and who are far more likely to perish from the vaccine itself…

With those who believe they can and should dictate the medical choices of free men and women.

We conclude today’s issue where we commenced — with Monsieur Étienne de La Boétie.

Here is how to break the hypnotist’s spell… for those who care to break it.

His counterspell requires not action — but inaction:

You can deliver yourselves if you try, not by taking action, but merely by willing to be free. Resolve to serve no more, and you are at once freed. I do not ask that you place hands upon the tyrant to topple him over, but simply that you support him no longer; then you will behold him, like a great Colossus whose pedestal has been pulled away, fall of his own weight and break into pieces.

The time for inaction is now…