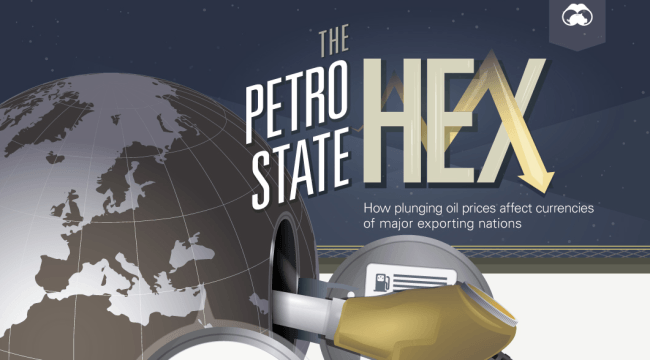 Every day, the world consumes 93 million barrels of oil, which is worth $4.2 billion.

Oil is one of the world’s most basic necessities. At least for now, all modern countries rely on oil and its derivatives as the backbone of their economies.

However, the price of oil can have significant swings. These changes in price can have profound implications depending on whether an economy is a net importer or net exporter of crude.

Net exporters, countries that sell more oil abroad than they bring in, feel the sting when prices plunge. Less revenue gets generated, and this can impact everything from balancing the budget to the value of their currency in the world market.

Net importers, on the other hand, benefit from lower prices as it decreases input costs for production. For example, a country like Japan only meets 15% of its energy needs domestically, and must import 3.5 million barrels of oil each day. A lower oil price significantly decreases these costs.

For many major net exporters of oil, changes in oil prices are highly correlated with their currencies. With oil prices crashing over the last year, currencies such as the Canadian dollar and Russian ruble have been highly impacted in terms of USD.

For example, the ruble is down over 40% since the price of oil began to crash in 2014. With a breakeven cost of $105/bbl, the dropping price of crude as well as dwindling ruble have sent ripples through the Russian economy.

The impact of oil on currency depends on how central banks approach policy:

Managed float: The central bank occasionally intervenes to “smooth out” the exchange rate.

The price of oil typically has the largest effect on countries with floating exchange rates such as Canada, Norway, or Mexico. Over the last 15 years, the loonie (-0.42), krone (-0.46), and peso (-0.31) have all had large negative correlations in exchange rates (paired with USD) against the price of oil.

Meanwhile, countries that have pegged their rate tend to feel the impact of oil price swings elsewhere in their economy. This is because such countries have to buy or sell currencies on the open market to maintain the currency peg.

Another method that can be used is to enforce a particular exchange rate by making it illegal to trade currencies at other rates, but this can often create a black market.

As a result, countries with fixed-rate policies such as Venezuela, Saudi Arabia, and Qatar have little to no correlation in their exchange rates (paired with USD) against the price of oil.

One lie after another… Why are so many fully vaccinated people getting COVID?…

Income has been flat for eight months going back to last October… The eviction moratorium expires — a disaster in the making?…

An expense is not an investment… How much money does $1 of infrastructure spending create?…