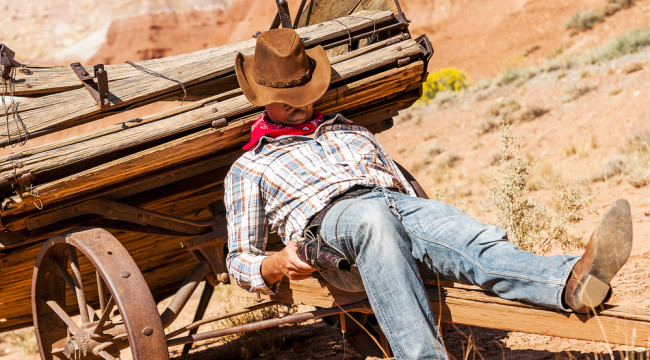 PARIS – In our recent review of slurs, insults, and pejoratives, we left out all the colorful words that describe country folk: yokels, hicks, hayseeds, hillbillies, rustics, rubes, bumpkins…

These epithets can be handy, especially when you try to understand what is going on in Oregon.

The Dow rose 117 points yesterday – or just under 1%. Investors must believe that last week’s selling was overdone.

But British bank Royal Bank of Scotland (RBS) warned clients to expect a “fairly cataclysmic year” and urged them to “sell everything except high-quality bonds.”

RBS also said oil may go to $16 a barrel. “We think investors should be afraid,” it added.

As near as we can tell, RBS is right.

According to the latest reports, low oil prices are pushing as much as one-third of the energy industry toward bankruptcy.

Energy sector debt is held by banks, hedge funds, and private investors. They have obligations of their own; their creditors may be headed for defaults and bankruptcy, too.

China is faced with even bigger potential bankruptcies.

The Chinese economy depends on exports. And its exports – along with world trade in general – are slipping. This leaves the resource economies – which depend on selling commodities to China – in trouble, too. (Bill Bonner Letter subscribers can catch up on Bill’s full write-up on China here.)

And so, the phony boom created by the Fed’s phony money has now turned into a real bust… just as the old economists – Hayek, Mises, and Rothbard – would have predicted.

Meanwhile, the standoff out in the high country, east of the Cascades, continues.

As we wrote on Monday, this is a “modern Western.” But in the media blizzard surrounding the story, it can be hard to tell which cowboys wear the white hats.

A report from the New York Times gives us a new point of view. It is not a Western at all; it is a circus. And all the performers are clowns.

Deep inside the federal wildlife compound, where armed citizens have been garrisoned for more than a week, nine-year-old Zoey Justus was preparing a snack platter for the occupiers – fruit, cheese, Ritz crackers – and her parents were explaining why they had brought her to an armed insurrection.

“Something I want to teach her is to not make decisions based on what’s easy or what’s comfortable, but to decide for herself what’s right,” said her father, Kody Justus, 44, a rancher in a cowboy hat and a paisley kerchief who had driven from three hours away. “And that’s what these guys are doing.”

As regular Diary sufferers know, we are sympathetic to rebels. We look out for drunks and halfwits. Our natural allegiance runs to lost causes and diehards.

But who asks a nine-year-old to decide for herself what is right? And who believes a troop of cowboy clowns has any better idea of what is right than anyone else?

At the Diary, we don’t pretend to know what is right. The best we can do is to gawk at what is clearly foolish, pretentious claptrap… point a finger… and laugh.

What is so funny about the “Oregon Standoff” is that everybody involved seems to want to make a laughing stock of himself.

The cowboys think they are asserting rights given to them in the Constitution… while claiming to support local arsonists, who say they don’t want their help. The New York Times continues:

“We are here because we are needed. We were asked to come,” said Debra Bass, 61, a Nevadan who is running the kitchen. Speaking of Harney County ranchers, she said, “Our hope is to lift them up and give them the courage to fight back.”

What a generous, giving spirit!

On the other side, the townspeople believe their safety, and their municipal budgets, have been put at risk by these gun-toting invaders. They depend on Sheriff Dave to deliver them from this evil.

And with good reason…

Every day, before dawn, a militia man named Duane Ehmer – armed with an 1860 cavalry pistol – rides a horse named Hellboy to patrol the insurgents’ compound.

“I’m looking for anybody that ain’t supposed to be there,” he told reporters.

But wait. He’s the one who’s not supposed to be there!

One comic character after another… one pratfall followed by another.

It is typical of the rural population to believe the city folk are out to take advantage of them. Compared to the simpletons on the prairies, the urbanites are slick, untrustworthy, and ungodly – always have been.

Pol Pot’s regime in Cambodia forced the city slickers out into the countryside, where millions died of hunger and disease… or were murdered by his soldiers.

The New York Times tells us that the rube revolutionaries in Oregon think the reverse might happen; they believe the feds have a plan to force them into cities by 2040.

The leaders are no less delusional than the rank and file. The New York Times again:

“We expect the federal government to voluntarily step back, observe the Constitution, and back off,” Ryan Bundy, who is leading the occupation with his brother Ammon, said in an interview at the compound.

“They better back off,” Mr. Bundy continued. “If they don’t, then this is going to continue to happen.”

Why would the federal government wish to “observe the Constitution” now?

He doesn’t say. Mr. Bundy is probably not given to deep and disciplined reflection on the nature of government.

You can go into almost any office in the U.S. – whether it is an insurance company or the FBI. You will see the same desks, the same people, the same paraphernalia of modern commerce and industry.

Likewise, you can go into a meeting of your church vestry… or a meeting of the Bureau of Land Management (BLM)… you will hear the same disjointed, nonsensical arguments… the same appeals to reason or prejudice… the same myths and fads of 21st century enlightened administration.

One will call for “transparency.” Another will say it is time to “pivot.” A third will say they need more “granular data.”

But government is not like the Sons of the Pioneers or the local Kiwanis. Government and the private sector are both full of geniuses and retards, saints and sinners, decent people and sadists.

Every revolution, civil war, and election is a contest to determine who will have the ultimate power – the power to steal and murder without going to jail.

Naked, that power is ugly, disgusting, and shameful. So, it is wrapped in myth and folderol – the ballot box, the rights of man, the divine right of the king, the divinity of the Pharaoh.

Such power is obviously coveted… and closely guarded. As the Whiskey Insurrection demonstrated, it won’t be surrendered to a bunch of cowboys with a grudge against the BLM.