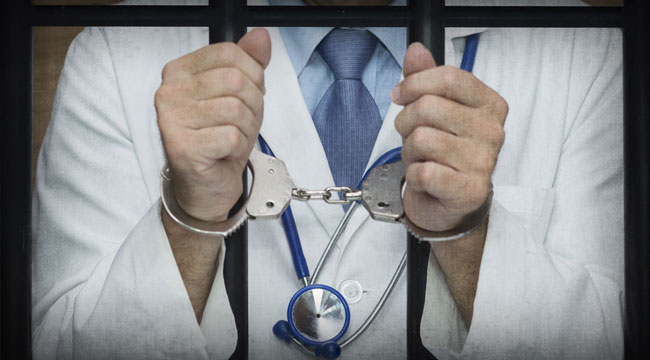 The Only Solution for the Obamacare Problem

Fewer and fewer doctors in the U.S. are self-employed, and more are employed by hospitals. That is a direct result of government policy, sharply accelerated by Obamacare. The trend will be damaging to American healthcare. It is still possible to reverse the decline, but powerful forces want it to continue.

Doctors effectively can’t own new hospitals any more. That’s because the Big Hospital lobby convinced the leftists who designed Obamacare that physicians owning hospitals was a conflict of interest. That’s right: according to that theory, the people who have devoted their lives to the study of medicine want to own hospitals so they can profit by withholding care, or by overcharging for it.

The trouble with that line of reasoning is that the non-physicians in charge of hospitals and insurance companies have no such conflict. Their incentives are to provide as little care as possible while charging as much as they can. Their desire to protect their personal reputations and adherence to ethical code are not as strong as for physicians.

The healthcare establishment is trying to “reimagine” the field of medicine, to change the role of doctors…

If you could invent the kind of person to run a healthcare business, you would invent a physician.

To reverse this, repeal Obamacare.

While half of all physicians currently work for independent practices, three of four doctors hired this year will go to work for hospitals, according to one study.

As Dr. Scott Gottlieb wrote last year, hospitals are on a buying binge:

“This should have everyone concerned. For one thing, there’s ample evidence that provider productivity declines when doctors become salaried employees of hospitals.”

In less urban areas, the hospital and high school can be the largest employers. That leads state and local governments to give them preferential treatment to preserve the jobs associated with them.

Dr. Jason Fodeman of the Galen Institute lays out the question: Will doctors working for hospitals lead to lower costs, or higher?

“The Medicare Payment Advisory Commission (MedPAC) says that the trend toward hospital-employed doctors may drive up costs because care that was once billed as physician visits will be billed at higher hospital outpatient rates — even when they occur in the same location. In addition, many hospitals charge facility fees for visits with doctors in their system.”

Explicit higher charges for seeing a physician in a hospital are one thing, but the real issue is the incentives doctors employed by hospitals face. As employees, they will be less efficient, and subject to the bureaucratic pitfalls present in all organizations.

According to Dr. Keith Smith of the Surgery Center of Oklahoma, Medicare and other insurance billing issues involve bigger legal hassles for the self-employed doctor. Self-employed physicians have to comply with Medicare and Medicaid regulations if they accept those patients, and simply filling out the forms incorrectly can lead to criminal charges. Doctors employed by hospitals don’t have that worry: their organization may have to pay a fine, but no one goes to jail.

But even if doctors don’t take Medicare and Medicaid patients, Obamacare pushes on them more regulations. Medical practices also have the same issues as other small businesses, which are holding back hiring and changing because of the law.

As The American Interest notes, despite the Obamacare sales rhetoric of lowered costs, hospital bills will be going up:

“On the surface, doctors taking on salaried jobs at hospitals might seem like good news for healthcare costs. One driver of healthcare inflation is the ‘fee for service’ model, which gives doctors an incentive to deliver the maximum feasible number of billable services per patient. Salaried positions, on the other hand, are supposed to keep down costs, because you get paid the same no matter how many tests you order.”

It isn’t the fee for service (FFS) model in itself that is the problem, but third party payer in conjunction with it. Taking the decisions about price and service out of the hands of doctors and patients and turning it over to actuaries and bureaucrats will not lower costs, but increase them.

Rather than ditching FFS, we should be de-emphasizing third-party payer (like Medicare, Medicaid, and typical health insurance) and instead allow people to pay directly for normal and routine medical care, perhaps with their Health Savings Accounts.

On top of everything else independent physicians face, the government is pushing a new medical coding system called ICD-10. Independent of Obamacare, it’s part of the general regimen of price controls forced on doctors by the healthcare industrial complex.

A new AMA study indicates ICD-10 will cost on the order of a physician’s yearly pay for a practice to implement:

It’s always the same with price controls, whether from insurance companies or governments. When limits are set on prices for products, people selling those products relabel them something else, often resulting in a cat-and-mouse game. Shortages, black markets, and higher overall prices are the inevitable result.

The healthcare establishment is trying to “reimagine” the field of medicine, to change the role of doctors, asking them to re-engineer their practices to work with the governmental, insurance payment models, and electronic systems being developed. Instead, those systems should be eliminated or built around the relationship between the patient.

If we continue down this road, doctors will cease to enjoy the level of public respect they currently have. Along with that lack of respect will come lower pay, and increased treatment of physicians as mere objects to be plugged and played like so many robots on a shop floor.

Loren Heal
for The Daily Reckoning

Ed. Note: How deep does the Affordable Care Act rabbit hole go? As time passes, more problems will arise. And if you’re a subscriber of Laissez Faire Today, you’ll find out how to combat these problems long before the rest of America learns it from the traditional news outlets. Click here to sign up for FREE right now.

RIP Obamacare -- Here's What Trumpcare Means for You

Health insurance is getting prime-time attention this week as Congress begins to debate the new “Trumpcare” bill. Today, Zach Scheidt explains what this bill means for you…as a retiree, as a taxpayer, and as an investor…