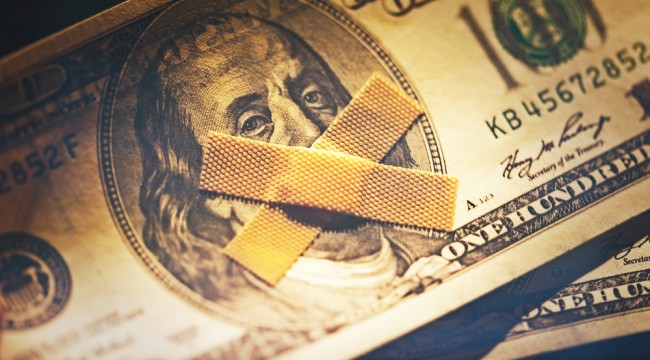 The Only Prescription for a Real Economic Recovery

In 2012, money mandarins running the European Union chose stagnation over restructuring. Here’s a consequence of that choice: expectations for a self-sustaining economic recovery keep getting crushed.

Two years ago, European Central Bank (ECB) chief Mario Draghi promised to do “whatever it takes” to hold the eurozone together. He bluffed nervous investors into believing in a promised (if needed) bond-buying program dubbed “Outright Monetary Transactions,” or “OMT.”

Since the summer 2012 bluff, the ECB hasn’t had to buy many government bonds issued by Italy, Spain, or any other peripheral EU countries; banks have bought them instead. Relentless bond buying has resulted in remarkably low bond yields for countries with junky credit profiles.

…the bad loans, swept under the rug for a few years by suspicious accounting, might be re-emerging…

But the bailout feedback loop running between banks and governments cannot last forever. There is only so much more room for weak EU banks to absorb bonds with an increasing amount of credit risk. Eventually, the real economy in peripheral Europe needs to recover in order to support large, mounting government debts. And it’s not recovering…

Industrial production frequently disappoints; tax rates can go no higher; manufacturers are not competitive; important export markets including China have slowed down; and most importantly, EU bureaucrats have wasted scarce resources to sustain an unsustainable euro system.

There should have been a massive purge of bad loans from the banking system, and a bank recapitalization. But it was decided to keep the banks out of restructuring — probably due to fear of bank runs and contagion. The bank restructurings that occurred were too small to make a difference.

So the bad loans, swept under the rug for a few years by suspicious accounting, might be re-emerging…

Banco Espírito Santo, a large Portuguese bank, is undercapitalized. It also has questionable accounting practices. Accounting at most other European bank is suspect, too. There is a reluctance to mark down bad loans.

After credit booms peak, bankers do everything they can to delay writing off bad loans, hoping to “earn their way out” of capital shortfalls by making new loans and booking carry trade profits. Central banks slash interest rates, which lowers the banks’ funding costs. Draghi bought the EU banks a few years of time by engineering a massive carry trade in sovereign bonds. But that trade looks over. So where will EU banks find profits to offset the loan losses they’re slowly confessing?

Central bankers are following the zero interest rate policy (“ZIRP”) playbook to ease the pain from popped credit bubbles. But years into a global ZIRP experiment, it’s becoming clear that propping up the old, busted banks is actually preventing a real recovery.

“So maybe its time for a new version of the old regime at the Fed. That is, for the Eccles Building to eschew interest rate-pegging and ZIRP entirely, and thereby allow financial markets to once again engage in honest price discovery and two-way trading; and to allow the natural business cycle to meander along its own capitalist path as determined not by the 12 members of the monetary politburo, but the 317 million consumers, producers, investors, entrepreneurs and even speculators who comprise the real main street economy.”

That’s the correct prescription for a real, sustainable economic recovery. But let’s not kid ourselves: there is little chance of the Fed reforming. Institutions rarely make proactive changes; instead, they react to crises.

By pushing interest rates down to artificially low levels, the Fed inflated the U.S. mortgage bubble and the inevitable 2008 crash. But unfortunately, that capitalism-damaging, boom-bust cycle did not spur the Fed to self-reflect and reform. Incredibly, the Fed emerged from the crisis as a hero!

So it doubled down on ZIRP, resulting in asset inflation for the rich and stagflation for the middle class. Asset inflation has not boosted the real economy (as planned by the Bernanke Fed). Quantitative easing (QE) has only deepened income inequality, worsened economic imbalances and eased pressure on government budgets.

Here’s how you can prepare for a slow grind lower in stock market valuations: be very picky about the stocks you own.

“[One should] question the current consensus that all reflationary medicine is good for the owners of capital,” writes Napier. “The faith among capitalists that activist authorities can only make them wealthier seems bizarre, as there is little in the historical record to associate government action with higher valuations and returns. In a world where QE does not inflate away debts and government activism is the next remedy, equity valuations have a long way to fall.”

Napier argues that five years of global QE was necessary — but not sufficient — to deleverage the financial system. Yet policymakers keep doubling down on activism. New, heavy-handed interventions include the “funding for lending” scheme in the U.K., and the ECB’s plans to funnel QE into certain favored sectors of the economy.

Such tactics, argues Napier, amount to state-directed allocation of credit. In other words: “Capitalism with Chinese characteristics.”

Here’s how you can prepare for a slow grind lower in stock market valuations: be very picky about the stocks you own. Companies with durable competitive advantages will hold up the best. Some stocks can overcome a bearish market environment and deliver great returns. But the idea that every stock can rise because central banks are printing money is getting very stale.

As for stocks to avoid, I’d stay far away from anything exposed to European banks. These banks have merely delayed — not avoided — restructuring.

Restructuring is devastating to existing shareholders, but offers good returns for new money entering after the equity destruction has occurred.

Over time, more investors will recognize the trap central banks have set for themselves. QE cannot be reversed without severe damage to the prices of bonds, property, and stocks. Because these assets serve as the banking system’s collateral, lower prices would rekindle fears of credit defaults. A bear market in real estate and paper assets would silence talk of tightening monetary policy.

So what asset class could benefit from spreading recognition that central banks are trapped into permanent easing? Gold, silver, and related miners would benefit.

Yamana is one of the few large gold mining companies capable of generating sustained, positive free cash flow at gold prices of just $1,100 per ounce. That’s good downside protection. But if gold prices average $1,500 between now and the year 2018, Yamana could easily generate more than $2 billion in cumulative free cash flow.

AUY offers huge upside, while limiting downside in case of an extended sideways move in gold.

P.S. Speaking of gold and easy money policies — did you hear what China’s doing with their gold? If you haven’t, you probably aren’t getting the FREE Daily Reckoning email edition. We’ve been predicting that their actions would send shockwaves through the economy between today, July 11th at the earliest all the way through 2015. Our man in the field is monitoring the situation for you, but it’s best you educate yourself ASAP. Sign up for the Daily Reckoning, for FREE, right here to get regular updates on what’s happening and how you can profit from it.