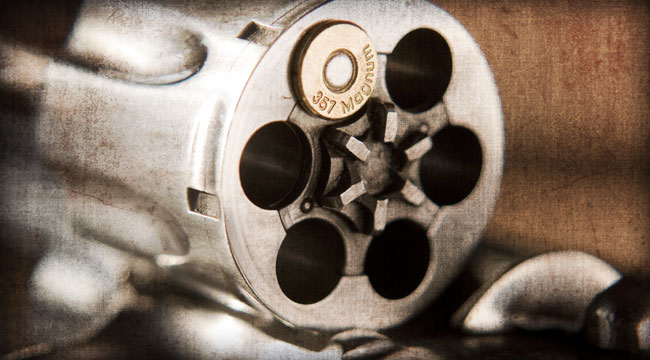 The One Remaining Bullet in "Russian Roulette" Investing

The cylinder of the .38 mm handgun spins around and around. It makes the familiar “whirrrrrrr” sound – but this time the sound isn’t coming from a movie or TV show. The hammer of the revolver clicks into place. I involuntarily shudder. It’s my turn.

Hands shaking, I slowly lift the gun to my temple. Beads of sweat gather on my forehead. Here I am, in a high-stakes game of Russian Roulette, milliseconds away from pulling the trigger – when suddenly it dawns on me: I don’t know how many bullets are in the gun. Was it just the one bullet? Two? Or were there more?

OK… Enough with the melodrama. I’ve never played Russian Roulette in my life. It’s unlikely that I’ll start now. But this was the metaphor a friend of mine – a professional investor – used recently to describe how he thinks about early-stage investing.

There’s one bullet that can’t be removed… Luck.

He envisions every potential investment as a game of Russian Roulette. And every time he can eliminate a potential risk, he pictures himself pulling a bullet from the gun. Here are the main factors he thinks about; the bullets he likes to remove…and the one bullet that’s impossible to get rid of!

First, it’s a good sign when the company has an experienced management team – a team that’s successfully built a company in a similar industry before. They would recognize the opportunities in the industry, as well as the landmines.

Second, generally speaking, if you can identify companies that have respected investors participating in the round (at the same terms as you!), you can mitigate some of your potential risk. The mere presence of a respected investor doesn’t mean the investment will be successful. But it sure can help your odds when someone with a good track record has faith in the start-up, and will do everything in their power to make it work.

The third step is checking if the company already has a product on the market? If so, are people willing to use it and/or pay for it? Getting traction for a new product is one of the main challenges of a start-up – and one of the biggest risks you face as an early-stage investor. New products often fall flat. And even if the product is amazing, the entrepreneur still needs to figure out how to market it. Look at the data before pulling the trigger. Look for signs of traction and growth.

Given the risky nature of early-stage investing, you should focus on opportunities that are targeting a large and growing market, and have significant upside.

The reason? Most early-stage companies go out of business – which is why we strongly advocate deploying small amounts of capital into many different crowdfunding opportunities! – so you need your winners to do extremely well.

Then, you need to ask yourself: “Why will this company work right now? Why wouldn’t it have worked before?”

There should be a catalyst that explains why this company can succeed right now. For example, a technical catalyst or a major change in legislation. If there isn’t one, chances are you’ll be left with an idea that sounded good in theory, but is unable to gain traction. Too early or too late can be a recipe for disaster.

As my investor friend was approaching the end of his explanation, I interrupted him. “Russian Roulette isn’t the right metaphor,” I said. “If you could remove all the bullets from the gun, you’re not really playing Russian Roulette.”

Luck has a funny habit of intervening with investments. Sometimes it brings disaster; other times it brings great fortune. Did you ever play the Pictionary-like game called “Draw Something” on your mobile phone? If so, you were one of the 50+ million people who downloaded it. It was created by a company called OMGPOP.

OMGPOP started out in 2006 as a dating site called “I’m In Like With You.” It didn’t get traction. Then they created more than 20 games. None of them were successful. The company was quickly running out of money.

Then they released “Draw Something” – and lightning struck. Last March, OMGPOP was acquired by Zynga, a publicly-traded gaming company, for about $200 million.

Did the OMGPOP management team all of a sudden become very smart businessmen? Probably no smarter than they’d been before. But they sure got a lot luckier. The lesson? Take out as many bullets as you can before pulling the trigger – but never forget, there’ll always be one left.

Ed. Note: Wayne is helping to develop a brand new service for Agora Financial – one that will help readers identify those companies that are poised to hit it big as crowdfunding gets into full swing. And readers of the FREE Daily Reckoning email edition will be among the first to be able to take advantage of it. If you’re not already a Daily Reckoning subscriber, make sure you get started now before the launch of this new service. You can sign up for FREE right here.