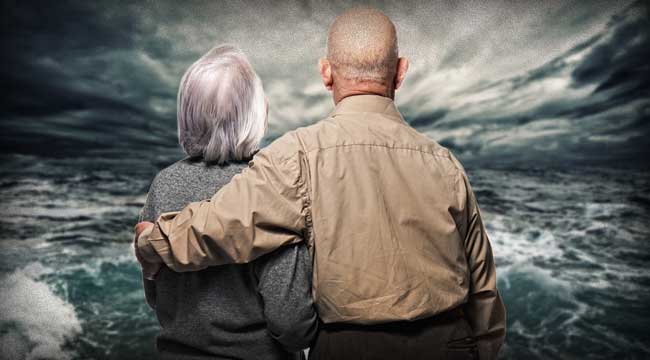 The dream of virtually every American is to retire as early as possible. Who doesn’t want to have each and every day to do exactly what he or she wants to do?

Sure, for some people, that would be work. They like having somewhere to go every day, being valued for their services, and the interaction with fellow employees and customers. But most people, provided they have enough money to live on, would just as soon hang up their timecards and play gin poolside.

The retirement plans of millions were ruined by the 2008 stock market crash, not to mention the real estate crash of the same year. If their stock portfolios didn’t take enough of a beating, Ben Bernanke’s zero interest rate policy will keep them punching a clock for years more, long after their backs, knees, and patience are crying out to call it quits.

According to a Gallup survey, the average retirement age is up to 61. That’s a four-year increase from 20 years ago. The average working American now plans to work until age 66. That’s up from age 60, which was the plan back in 1995.

“Because most of the uptick came before the 2008 recession, this shift may reflect more than just a changing economy,” Gallup’s associate editor Alyssa Brown wrote in her report on the study. “It may also indicate changing norms about the value of work, the composition of the workforce, the decrease in jobs with mandatory retirement ages, and other factors.”

That’s putting a positive spin on the data. But it’s hard to imagine people working longer if they don’t have to. According to Gallup, 37% of nonretired Americans claim that they will quit working after age 65. A decade ago, that percentage was 22, and in 1995, only 14% guessed they’d be retiring after 65.

Is it possible that work is now more fulfilling for so many more people? Were so many employers discriminating against willing 65-year-olds a couple decades ago? Puh-leez! People are working longer to keep food on the table and a roof over their head.

Even retirees who made all the right moves are hurting. Ben Bernanke doesn’t much care about a guy like Forrest Yeager, who told The Wall Street Journal a couple years ago that his $45,000 nest egg wasn’t throwing off much to supplement the $1,500 a month he receives from Social Security. Yeager, a spry 91 when featured by the WSJ, figured his money would last only another six years if rates stayed low.

“Americans who have done everything right, have worked hard, saved their money, and stayed out of debt are the ones being punished by low interest rates,” says Federal Reserve Bank of Dallas president Richard Fisher.

But while Fed official Fisher describes savers as doing the right thing, Charlie Evans of the Chicago Fed says, “It seems to me if we could somehow get lower real interest rates so that the amount of excess savings that is taking place relative to investment is lowered, that would be one channel for stimulating the economy.”

Les Miserables actress Frances Ruffelle is a girl after Evans’ own heart. “I’m not a saver,” she says. “If I had a savings account, I would spend it. When we were kids, we were always told to save our money for a rainy day, but I think, Life is too short for that. Enjoy it. Enjoy it with your friends and be generous. What’s the point of keeping it there for a rainy day in case you die tomorrow?”

A person will think that way when rates are so low.

Lifestyle coach John Strelecky says you shouldn’t worry about saving for retirement. “Spend more time doing the things you want to do now, because you don’t know about the future,” says Strelecky.

“No matter when that two-minute warning ticks off, you could say you did what you wanted to do with your life,” he said. “Don’t wait until you’re 65 to start spending your money to live a rewarding life.”

After all, one in five men doesn’t make it to age 65, and of those that do, nearly 30% will suffer from life-threatening cancer, stroke, or heart attack. As Lord Keynes famously said, “In the long run, we are all dead.”

It would be nice to know what day exactly we’re to pass on. Unfortunately, we have to plan for a long life even if we don’t get one. After serving under Gen. Patton in World War II and working for Eastern Airlines, Mr. Yeager retired in 1982 with plenty of savings, but he and his wife “lost our butt” in the 1987 crash. Despite his money running short, he told the WSJ that he was going to Las Vegas to have fun.

Bernanke’s legion of Ph.D.s at the Fed dearly wishes those saving for retirement and those in retirement would do their part to decrease the gap in aggregate demand. If you don’t need a big-screen TV, buy a few shares of Apple. Let loose a little. You can’t take it with you. We’re all in this together, says President Obama. Don’t be ambitious and save in order to take care of yourself. The economy needs you now.

Of course, this is all nonsense. Nothing is more human than being self-reliant. To be free, one must take care of oneself, and that means saving for lean times — call it a rainy day, retirement, or what have you.

The Democratic debate last week provided quite a bit of interesting food for thought. Elizabeth Warren and Andrew Yang both had some interesting proposals that would affect both taxes, and the amount that Americans receive, but I’m not sure either proposal will perform the way they intend.