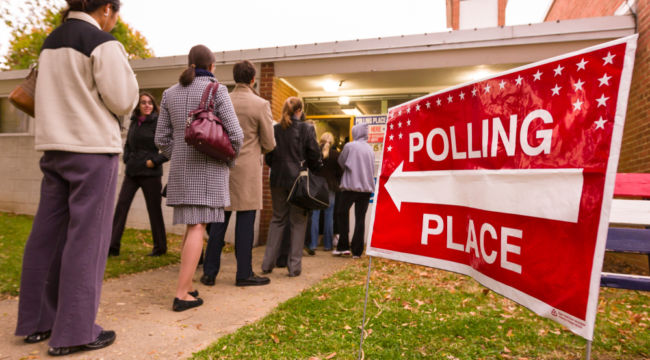 The No.1 Argument Against Voting

On this Election Day, here we have a timely, if controversial proposal.

It is a heresy upon the civic religion… and a slander against all crusaders who fought for the franchise through American history.

Yet The Daily Reckoning blesses this undemocratic blasphemy with a wry, seditious wink.

Please spare a moment to reflect upon the hazards of voting.

If you vote and you elect dishonest, incompetent politicians, and they get into office and screw everything up, you are responsible for what they have done. You voted them in. You caused the problem. You have no right to complain.

I, on the other hand, who did not vote — who did not even leave the house on Election Day — am in no way responsible for what these politicians have done and have every right to complain about the mess that you created.

“The only way politicians get elected these days is by promising to loot the public treasury… Under what ‘civic duty’ does that fall?”

Under what civic duty indeed?

Now, we freely confess it: We have the public spirit of a cat.

Some jackass yells something about the greater good and we’re instantly off in the other direction, two hands on our wallet.

Yet you must agree there is justice in the torts here described — can you not see the floods of red ink heaving from the United States Treasury?

The Great Republic is presently some $21.6 trillion in hock… and counting.

Its government required 193 years to accumulate its first trillion of federal debt, notes James Grant of the eponymous Grant’s Interest Rate Observer (see below for more).

But it will take on that much debt this year alone, laments Grant, lifting his jaw from the floor.

A handsome debt can be justified at times — a World War II will not be funded through the proceeds of taxation alone.

But America has always worked down its debts once the crisis blew over… almost as a point of pride.

Nowadays it piles on debt in all seasons — in war, in peace, in depression, in prosperity.

In a supposedly roaring economy, the United States government took on $779 billion of debt this past fiscal year.

And trillion-dollar annual deficits are likely on tap for the next decade at least.

Lest we be accused of partisanship… we haul both Democratic and Republican parties into the dock.

The one party only locates its fiscal conscience when the other is in power. On their own, each spends like raucous sailors turned loose on shore.

But were the American people humbugged into so much debt? Or have we freely and knowingly put our names to the contract?

1: The elected officials of the United States are colossal rogues who amassed a $21.6 trillion debt in full defiance of the thrifty American voter.

2: The $21.6 trillion debt reflects faithfully the expressed desires of the American voter. He has gotten what he wants. At the very least, he accepts it in exchange for the perceived benefits it showers upon him.

Option 2 stands in full indictment of them.

If true, as we claimed recently, the United States is a nation of no-good deadbeats.

We are told over half the country collars more in government transfer payments than it pays in taxes.

Is this the model of civic virtue?

If doing for your country, it is a strange kind of sacrifice.

We the People will occasionally dispatch a Ron Paul to Washington, it is true.

But for every Ron Paul, We install two dozen spendthrifts… six dozen profligates… a hundred wastrels.

“We simply have to elect better people — that is the answer. We deserve better. But the entire system is corrupt. We must work to change it.”

Here we have the immemorial cry of the naive, the true believer, the babe in the woods.

And it will likely remain the immemorial cry of the naive, the true believer, the babe in the woods — until kingdom come, world without end.

“Democracy is the theory that the common people know what they want,” said the inimitable H.L. Mencken, “and deserve to get it good and hard.”

No matter who wins today’s elections, we suspect we’ll be getting it — good and hard.