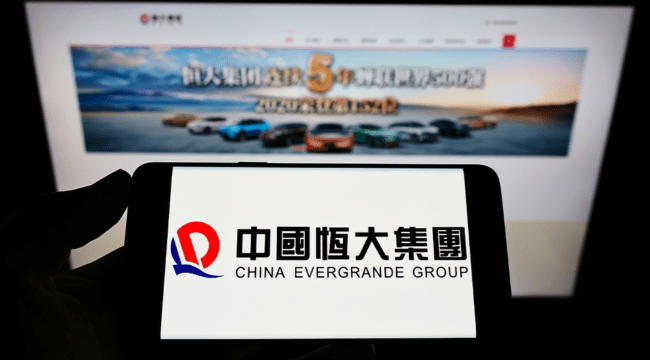 The Next “Lehman Moment”

The happy talk out of Wall Street would have you believe that the Evergrande financial collapse in China is under control and that responsible parties have taken steps to avoid a “Lehman moment” in Chinese capital markets.

Almost everything about that narrative is factually wrong. It’s Wall Street happy talk at its finest, assuring investors that things are under control while the smart money runs for the hills. Something closer to the truth was reported the same day in The Wall Street Journal. Here’s their summary:

Chinese authorities are asking local governments to prepare for the potential downfall of China Evergrande Group, according to officials familiar with the discussions, signaling a reluctance to bail out the debt-saddled property developer while bracing for any economic and social fallout from the company’s travails…

Local governments have been ordered to assemble groups of accountants and legal experts to examine the finances around Evergrande’s operations in their respective regions, talk to local state-owned and private property developers to prepare to take over local real estate projects and set up law enforcement teams to monitor public anger… a euphemism for protests, according to the people.

This actual crisis management plan is the worst possible playbook. Why?

Any response to a financial crisis has to be centralized so that decisions about how to deploy limited resources can be made rapidly. Some lenders must be saved, some should be allowed to fail. Equity holders should be wiped out. Foreign investors in dollar-denominated debt of Evergrande will be left to fend for themselves and possibly seek relief in their home countries.

The point is these types of decisions cannot be made by “local governments” as proposed by the Chinese. The government plan is not a serious effort to truncate a financial crisis. It seems designed more to suppress social unrest and perhaps arrest “troublemakers.”

Western analysts don’t understand this dynamic because they view events through the lens of Wall Street and Washington norms.

But the Communist Party of China does not care if Chinese oligarchs or investors in BlackRock ETFs lose money. That suits them fine. They’re communists.

The Good News and the Bad News

The good news is that the China myth has now been revealed to be a fraud. The globalist dream for China has crashed and burned. Good riddance.

Chinese regulators believe they have the resources to bail out or restructure Evergrande with some haircuts for creditors.

They probably do, but that misses the point.

This is another fiasco in the making because those investors will dump that unwanted real estate, which will collapse the property market in turn. Essentially, Chinese regulators are so desperate that they are trying to pay off creditors in kind with deeds to real estate that no one wants.

The Chinese are only looking at what’s inside the four walls of Evergrande and ignoring the fact that their entire property and financial system is on the verge of a world-historic crack-up.

But here’s the real problem: The damage will not be confined to Evergrande. It will spread quickly to counterparties of Evergrande, including other developers and banks.

This unprecedented combination of a financial crisis and Communist indifference could result in full-blown contagion that could emerge as a crisis in the U.S. and Europe within a few months.

I’ve predicted this all along, but in reality, it wasn’t that hard to predict. The Chinese economy is basically a debt-driven Ponzi scheme.

Up to half of China’s investment is a complete waste. It does produce jobs and utilize inputs like cement, steel, copper and glass. But the finished product, whether a city, train station or sports arena, is often a white elephant that will remain unused. The Chinese landscape is littered with “ghost cities” that have resulted from China’s wasted investment and flawed development model.

And as I’ve explained before, that has serious implications for China’s leadership…

The “Mandate of Heaven” in Jeopardy

China’s economy is not just about providing jobs, goods and services. It is about regime survival for a Chinese Communist Party that faces an existential crisis if it fails to deliver.

If China’s job machine seizes, as parts of it did during the coronavirus outbreak, Beijing fears that popular unrest could emerge on a scale potentially much greater than the 1989 Tiananmen Square protests. This is an existential threat to Communist power.

President Xi Jinping could quickly lose what the Chinese call “the Mandate of Heaven.”

That’s a term that describes the intangible goodwill and popular support needed by emperors to rule China for the past 3,000 years. If the Mandate of Heaven is lost, a ruler can fall quickly.

Even before the present crisis, China has had serious structural economic problems that are finally catching up with it.

China is so heavily indebted that it is now at the point where more debt does not produce growth. Adding additional debt today slows the economy and calls into question China’s ability to service its existing debt.

Essentially, China is on the horns of a dilemma with no good way out. China has driven growth for the past eight years with excessive credit, wasted infrastructure investment and Ponzi schemes.

Will China Try to Create a Dangerous Diversion?

The question is will China move aggressively against Taiwan, for example, to distract the people and attempt to unite them?

China does not want war at this time. But diverting the people’s attention away from domestic problems toward a foreign foe is an old trick leaders use to unite the people in times of uncertainty.

If China’s leadership decides that the risk of losing legitimacy at home outweighs the risk of conflict that would likely involve the United States, the likelihood of war rises dramatically.

I’m not making a specific prediction, but wars have started over less. This is a very dangerous time.