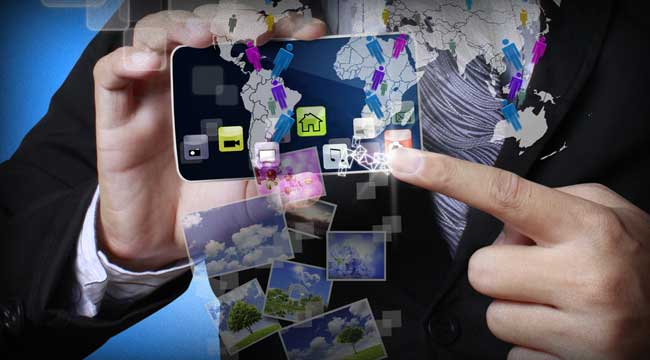 By now I’m sure you’ve heard about brand-new products in the works at tech giants Apple (NASDAQ: AAPL) and Google (NASDAQ: GOOG). Both products are aimed at moving mobile computing beyond hand-held devices into the realm of wearable computing.

Apple’s device, informally dubbed “iWatch,” is a small computer that users will wear on their wrist. This smartwatch is believed to include functionality that’s currently in the company’s existing iPhones and iPods. It may also include new features such as biometric security and health monitoring, as well as other functions we probably haven’t heard about yet.

Little is actually known about the device and the only info we really have at this point is that it is in development, it runs iOS and it may feature a curved glass face, which obviously isn’t very uncommon for a wristwatch. Bloomberg added some fuel to the fire last Tuesday evening when it reported that Apple’s iWatch is real and it is likely “beyond the experimentation phase”. Its sources suggest that a team of more than 100 Apple employees including senior director of engineering James Foster is currently working on the device. The site, however, offered no guess as to when the iWatch might launch.

That buys you time to position yourself before these products officially go on sale. While you could invest in either Apple or Google, and probably make small gains, it would be far cheaper and potentially more rewarding if you were to invest in the smaller companies providing components for these brand new products — the “pick and shovel” plays, if you will.

For example, a device small enough to be comfortably worn on the wrist will require a correspondingly small battery. Managing power consumption is, therefore, critical — and the most power-hungry component of small mobile devices is generally the display. Furthermore, the iWatch screen may need to be curved to fit more naturally against the wrist.

In addition, OLED displays require fewer layers to construct. Unlike LCD screens, the elements of an OLED display can provide not only color, but also light.

LCD displays, on the other hand, require an additional layer to either reflect ambient light, or, as is the case in the type commonly used in everything from mobile devices to television displays, a lit layer. All other things being equal, an OLED screen can be manufactured thinner than LCD displays. This is an important consideration in a small device designed to be worn on the wrist.

OLED’s advantages mean that Apple should be considering their use in a future iWatch. The company, in fact, is reported to be doing exactly that in prototypes.

Our Technology Profits Confidential portfolio holds picks specializing in these components. But I’ll list some other opportunities in this letter for Tomorrow in Review readers.

One company we have has favored advanced OLED technology and also sells OLED materials to the display industry. I believe a future iWatch, if OLED equipped, will likely use patented technology manufactured by one of its licensees, such as Samsung or AUO.

There’s also eMagin (NYSE: EMAN), a leader in microdisplay technology. This company has a microdisplay that’s consumes very little battery yet has a comparatively bright and full color OLED microdisplays. The screen turns on instantly at low temperatures without the need for heaters and has high commercial and military ruggedness standards.

There’s also Korea-based LG display (NYSE: LPL), which does LCD but is going the direction of OLEDs in primarily TVs — but also other technologies.

I should mention a little more about Taiwan-based AU Optronics (NYSE: AUO). This company helped both Sony and Panasonic build the 56-inch OLED TV prototypes showcased at this year’s Consumer Electronics Show. This company recently claimed to have built the world’s largest OLED panel to date, at 65 inches… however, AUO has yet to perfect its mass production techniques, and has a long way to go before improving yields on smaller OLED screens.

A future iWatch, anticipated in 2014, could bode well for these companies.

Google, on the other hand is working on a different part of the anatomy. The company has already released a limited run of an early model of Google Glass for testing, which is worn like a pair of glasses. The device presents information via a head-mounted display, and interacts with the user through voice recognition, touch and gestures. It includes much of the functionality we associate with a modern smartphone.

Future iterations of Google Glass could include NFC (near-field communications) support. Recently released source code for the Google Glass operating system reveals that code-enabling NFC is present. NFC allows devices to wirelessly share information over short distances, with a very short time to establish a connection. NFC would be useful for sending commands between Google Glasses and Android smartphones or to quickly share information between two Glass wearers.

This would speed NFC circuit adoption, which would be a positive development for another Technology Profits Confidential portfolio pick. You can probably guess who that leader in NFC technology is.

But OLED technology might also be a part of Google Glass. Future consumer versions of the device are rumored by The Korea Times to include OLED, courtesy of Samsung.

I’d like to add that NFC might also be included in Apple’s iWatch as part of a mobile payment system. Simply waving your iWatch-wearing wrist in front of a point-of-sale terminal to buy stuff at the store could end up being a killer app for Apple’s new product.

If you want to play that angle, you may want to take a look at Verifone (NYSE: PAY). Verifone is a global leader in secure electronic payment technologies. It is well positioned to benefit from NFC through mobile transaction technology. As NFC enabled devices come to market, and demand from contactless transactions grow, retailers will likely be forced to upgrade their current devices to meet the new standard.

Glass and iWatch are potential blockbuster products. The success of either will be the success of their component suppliers, which could well include these companies.

Keep an eye on this space!

Part II: Why The Bull Market Isn’t Over

Today, Zach Scheidt continues his three-day series on why the 112-month bull market isn’t over…