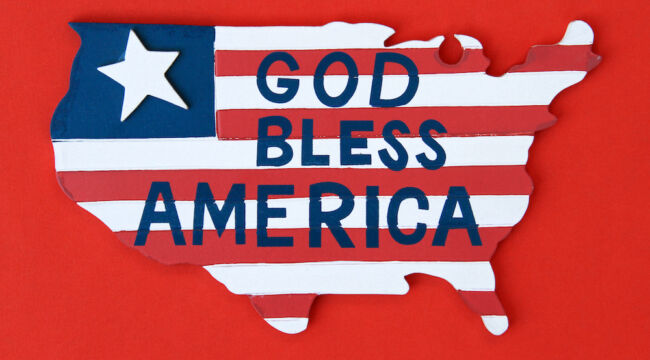 The Luckiest Country on Earth

Of these, we conclude God looks most jealously after the United States of America.

America absorbs more divine favor than the most foolish fool… or the drunkest drunkard.

In quiet moments we often marvel. We marvel, that is, that we are so fortunate as to reside in this Eden, this El Dorado, this Elysium.

God filled two oceans — one Atlantic, one Pacific — to moat it off from marauders.

Against its land borders north and south He dropped two bantamweights.

He blessed it with rich, fertile soil. Vast tracts of bountiful land. An extended capillary system of internal waterways. Natural harbors from which to send things out… and to take things in.

What other nation has enjoyed such natural, God-granted riches?

England or Japan may have its points. Yet each is an island nation lacking critical resources.

Germany is squeezed between the French and Russian vice.

Its flat geography and absence of natural barriers render it eternally vulnerable to invasion from either direction.

Russia too is massively vulnerable to uninvited visitors… as history documents richly. And despite its immense bulk it is boxed in by winter ice that chokes its coasts.

China believes it is the Celestial Kingdom, uniquely favored by God. Yet we are not half-convinced it is true.

Its Great Wall was required to be great for a reason.

And off its coast lurks a chain of fortresses that bottle it in — South Korea, Japan, Taiwan, the Philippines — all of which ally with God’s chosen nation.

But let us extend our investigation beneath the equator. How about Brazil?

“Brazil is the country of the future,” runs the old saw — and “always will be.”

Large hunks of it are lawless jungle. It lacks arable land. Its primary cities are isolated dots.

No… God has sat America on Earth’s throne.

Has He given it a Baltimore… and a Cleveland?

Has He peopled its capital with rogues, rascals, cadges, chiselers, grifters and swindlers?

Well friends, maybe He has. Yet even God Almighty must be granted space for error.

He has nonetheless showered America with such immense natural extravagance… only Americans themselves could make a botch of the place.

And it appears they are determined to do precisely that…

Was It Worth It?

The free and the brave have frozen their economy to dodge a bug that murders under 1% of its victims.

This mass incarceration has no parallel in all of history.

The damage is heavy. Perhaps mighty.

Second-quarter GDP came collapsing down at a negative 32.9% annualized rate. Millions and millions were heaved from their jobs.

No quarter of the Great Depression could even approach it.

Our own Jim Rickards, meantime, projects the United States economy will not attain 2019 levels until 2025.

The reality is, the economy’s in very bad shape. The idea that we’re going to bounce back out of this with all this pent up demand is nonsense. The data is already indicating we’re in a recovery, yes. But if you fall into a 50 foot hole and climb 10 feet up, you’re still 40 feet in the hole.

And that’s if things don’t get worse from here. But they could, especially if we get a deadly second wave (of the coronavirus).

We’ve climbed 10 feet out of the hole. Unfortunately, we could find ourselves right back at the bottom before too long.

Are Americans willing to sink 10 feet down again?

We do not know. But to climb the full 50 feet up would require years of hard, hard legging.

The Blue and the Red

Not only have Americans risked economic suicide, they appear willing to risk national suicide.

Swaths of Americans no longer stand shoulder to shoulder — but face to face.

Red and blue have been face to face in Kenosha, Wisconsin this week. Another police shooting brought them together… so they could cut each other apart.

Similar scenes have unfurled in cities throughout these God-blessed United States.

It appears some critical hinge, somewhere deep within the national psyche, has abruptly given way…

To the one side was Old America.

Old America is the America of the founding… with its heroes… and its myths.

Rome had its Julius and Augustus. But the United States has its Washington and Jefferson — and to balance the ticket by region — its Adams.

These are men who glisten in the mists, revered by generations of Americans.

Yes, they had their failings, Old America concedes — two of the three listed held humans in bondage.

Yet they were men of tall and mighty deeds. They were titans who fanned into existence the “indispensable nation.”

This America is fundamentally good, believes Old America. It is perfect by no means. But it pursues relentlessly Jefferson’s more perfect union.

To New America, the nation is condemned to hell by its original sin: slavery.

Thus its very founding lacks all legitimacy. It was engineered by a crew of blackguards who were irretrievably racist. And sexist.

Meantime, New America has ripped down Old America’s statues. Not merely the Lees and the Jacksons — but the Washingtons.

Which America will prevail? Old or new?

Yet perhaps we overegg the pudding, stretch the facts to fit a theory. We likely do. Our pen often runs away with us when an idea invades our head.

There, of course, exist shades of red, shades of blue.

Only a small minority of red and blue are face to face in America’s streets. And we suspect most blue folks are not prepared to dynamite Rushmore or rechristen the nation’s capital.

Perhaps we are merely enduring a transient national psychosis. And Americans, presently face to face, may once again fall in shoulder to shoulder.

Some shout about an approaching civil war. We are not among them. We do not believe it.

We certainly do not expect the upcoming election will unite the nation — rather the opposite.

But we do believe the center will crack under the strain.

The Cycles of Nations — and Empires

Great nations, like great empires, nonetheless run in cycles — from rosy dawn, to high and cloudless noon, to twilit sundown.

The United States is an empire of sorts, though none dare say the word.

“Empires have a logic of their own,” wrote our own Washington and Jefferson — Bill Bonner and Addison Wiggin — in Empire of Debt, concluding:

Just so. But if the American empire is to end in grief, we only hope it is a quiet grief, a peaceful grief.

Let it go out whimpering — not banging.