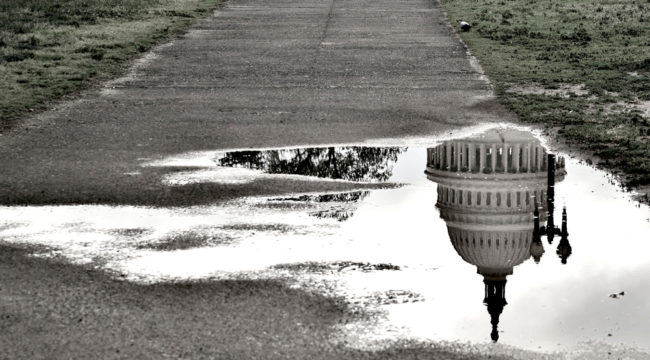 Today we submit the case that Friday’s GDP report — grand, gaudy and garish — is deeply shallow beneath the scintillated surface.

That is, the deeper numbers tell a tale 180 degrees out of joint with appearance.

And private-sector growth may actually peg along at the crawlingest rate in six years.

Let us now peek within and beneath official data…

But scratch the surface and what do we find? What accounts for the screaming headline number?

Companies will often amass inventories to jump out ahead of expected tariffs.

Inventories have been mounting for the past year and then some… rising some 8%.

And data reveal American business piled up $32 billion of inventoried goods the first quarter — a $46.3 billion swelling over the previous quarter.

Government bean counters heap inventories into the column of business investment. Thus in the official telling, they add to the gross domestic product.

Rising inventories, which are considered an investment and add to GDP, are eventually followed by a decline in inventories when companies whittle them down again, and there is a price to pay for it…

Companies that sit on that inventory and have trouble selling it will at some point cut their orders to reduce their inventories. When this happens, sales drop all the way up the supply chain… when businesses whittle down their inventories by ordering less, it ripples through the economy, lowers GDP growth…

“The buildup in inventories over the past several quarters points to a large reversal in the second quarter.”

How about the third… and the fourth?

Meantime, we are informed the false fireworks of government spending account for another portion of the final 3.2%.

But according to the ladies and gentlemen of Oxford Economics, one metric tells tell a far truer tale of GDP:

What if we run the blue pencil through Q1 inventory and government GDP contributions… and cleave to final sales alone?

Let us peek even deeper beneath the shimmering surface…

Private-sector consumption and investment — the pounding pulse of a healthful economy — trickled to a semi-comatose 1.3%.

That is the faintest increase in nearly six years.

Consumer spending overall increased a mere 1.2%… off from 2.5% the quarter previous.

MarketWatch informs us that investments in factories, offices, stores and oil wells sank for the third-straight quarter.

It further informs us that investments in equipment such as computers, aircraft and machinery overall scratched out a piddling 0.2% increase.

Is this the eight-cylinder roar of a throbbing economic engine?

“On the outside, it looks like a shiny muscle car,” writes Bernard Baumohl of the Economic Outlook Group…

“Lift the hood, however, and you see a fragile one-cylinder engine.”

“First-quarter GDP is 3.2%, but the underlying data is much weaker and is consistent with a slowing economy.”

The aforesaid Oxford Economics affirms the economy is “undeniably cooling.”

Meantime, the Federal Reserve huddles at Washington this week.

What does Friday’s GDP report implicate for interest rates?

Despite the dazzling headline number, the Federal Reserve’s “Open Market” Committee will hold rates steady. They will certainly not raise rates.

Why are we so certain?

And it has increased only 1.6% year over year.

So the Federal Reserve remains hopelessly asea, as far as ever from its infinitely elusive 2% target.

And it will cut rates before raising rates — depend on it.

But last week we explained why we expect inflation to menace within the foreseeable future.