It was a mid-afternoon in 2006 in Cannes, where I joined Dr. Kurt Richebächer at his apartment to collaborate on a book project that, unfortunately, failed to come together before his death a year later.

The old man grabbed his cane and moved to a comfy chair and clicked on a widescreen TV.

It was bad news from what I remember. But as far as the economic commentariat was concerned, it was good news. It meant the Fed would simply pump more money into the market.

Traders loved the report; stock futures back in New York had already begun to rally.

Kurt, on the other hand, was flabbergasted. He started talking to me and to the television in German. Neither I nor the TV understood German…

Dr. Richebächer was kind of a crank. He was a special kind of crank, though.

He used to say something like: “the sins of the boom, will be laid bare in the bust.”

Kurt wrote a newsletter for more than 40 years. And back in the late 90s and early 2000s we published The Richebächer Letter.

Kurt accurately forecast the tech wreck. And for having done so, he became a semi-celebrity among the geeks — present company included — who like to read and think about an obscure outpost in the field of economics — the Austrian school.

Kurt never claimed to adhere to the Austrian school, but that hardly seemed to matter. His insights apply just as much today as they did 14 years ago — probably more.

It all started after World War II when Kurt had made a name for himself as the best-known financial journalist in Germany — a razor-sharp critic of what he saw as the stupid economic and fiscal policies of the post-war German government.

By 1957, he’d become one of the top commentators in London on British economic policy. In 1964, Kurt took over the post of chief economist and managing director of the massive and world famous Dresdner Bank.

He advised billion-dollar banking clients what to watch for in the unfolding world economy. Kurt told it like it was, giving the bank’s uber rich clients every possible insight they needed to protect and grow their money.

The clients couldn’t get enough of it. But German Chancellor Helmut Schmidt wanted it to stop. So much that he personally begged Jurgen Ponto, then the chairman of the Dresdner Bank, to put Richebächer on a leash.

But Ponto knew what Richebächer had to say was too important.

So Ponto defied the chancellor and protected Richebächer’s right to publish his scathing observations. However, on July 30, 1977, Jurgen Ponto was murdered.

A Death Leads to a Birth

This tragic turn of events — a kidnapping gone wrong — forced the creation of one of the most respected financial advisory letters ever produced, the aforementioned Richebächer Letter.

Without Ponto, Dr. Richebächer made a clean break from the bank and published his viewpoints entirely on his own.

While I was having dinner with him overlooking the Mediterranean in Cannes, we had spent several weeks trying to assemble what would then have been the first critique of the Bernanke Fed, even before Bernanke had officially taken his seat behind the googly-eyed Greenspan.

We never finished his manuscript. Within a few months, the octogenarian Richebächer grew ill and passed away. When he died, he willed his library to us. It’s an adjunct to my office in 808 St. Paul Street, here in Baltimore: 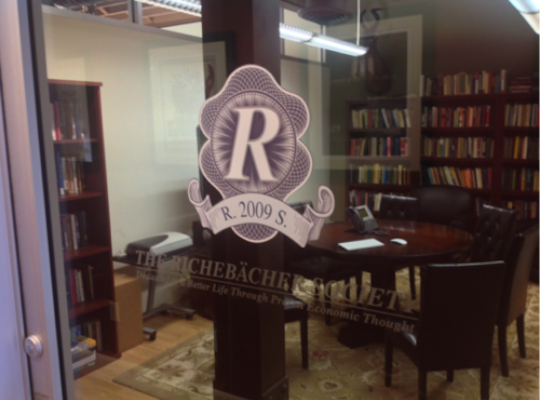 Why Do You Do It?

At dinner that evening in Cannes 14 years ago, I had a burning question for Dr. Richebächer:

“After 40 years,” I genuinely wanted to know, “why do you continue to criticize bankers, politicians… corporate leaders? After a while, doesn’t it just get old? Aren’t you successful enough that you don’t have to do it anymore? I mean… look at this place.”

“Addison,” he said in his thick German accent, marveling at our waitress walking by, “what good would it do for me to write about all the things that are going right with the world? We should simply enjoy those things.”

What amazing insight. At least one of my readers agrees…

“Up until now, I had never heard of Dr. Richebächer. He sounded like quite the personality. I truly appreciate his remark about spending time enjoying the things in the world that are going right.”

I love reader comments. The last few days we’ve received emails from the Philippines, England and this one from Canada:

Being a Canadian and therefore living in what must seem to be a very socialist country from the American perspective, I am curious how you reconcile the notion that the USA is not already a hugely socialist country.

It’s absurd really to think of either the U.S. or Canada as Socialist at all, in the true sense of the word, because under true socialism the means of production are owned by everyone, the collective.

We’re not there. Yet. And who’s looking up the definition on Wikipedia, anyway?

The common definition of socialism is represented by the idea,” says Mr. Nissen, “that the general population is getting goods or services for free, or for an obvious low cost, paid for or subsidized by the government, who in turn tax the population or corporations, or simply create inflation and/or debt.

I paraphrase for brevity from here. The “really juicy” stuff is the U.S. government’s infatuation with never-ending bailouts on every level, from banks, to corporations, and to individuals receiving social security, food stamps, or unemployment insurance.

And now all of this is in hyperdrive with the pandemic in play. The Treasury is sending money directly to citizens.

“The USA parades around calling itself a capitalist country,” our friend to the North observes, “but if that were true, you would not be bailing out companies and individuals that were too stupid or irresponsible to be prepared for all eventualities like a banking crisis in 2008 or a pandemic in 2020.”

Well. Our friend Dr. Richebächer referred to our era as “Late Degenerate Capitalism.”

Late Degenerate Capitalism has reached a new level of absurdity. If an economic number comes in worse than expected, it’s often great news for the markets, because it means the Federal Reserve will keep pumping money.

Is it any wonder that the gap between the stock market and the economy has never been wider?

You could drive a fleet of 18-wheelers through it.

The Myth of the Consumer Economy

One more thing has not changed since Dr. Richebächer’s death in 2007 — the pervasive notion that consumer spending is what makes America — indeed any nation — prosperous.

Dr. Richebächer would have none of it.

Dr. Richebächer knew that healthy economies grow when consumption is fueled by production.

Unhealthy ones, by contrast, inflate asset prices… to be used as collateral… to accumulate debt… to use for consumption.

We all know that describes the U.S. economy.

Returning to our correspondent from Canada, I also see what you see, but am struggling myself to comprehend the scope of things to come.

One thing seems clear, the longer the pandemic, the farther away the old normal seems, the more we will stray from sound economic policies. And that will only create more problems.

When you mismanage an economy by piling up debt and deficits, I paraphrase Warren Buffet from my documentary I.O.U.S.A., the more likely some demagogue or demagogues will come along and “do some very foolish things.”

I think it’s pretty safe to say that some demagogues are getting ready to do some very foolish things.

That’s in addition to the very foolish things that are being done already.

Where’s Dr. Richebächer when we need him?