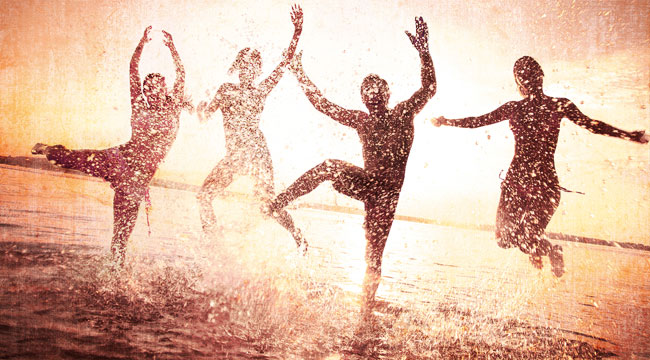 The Joys of Living

“What are you complaining about all the time?” people sometimes ask me. “I’m just about as free as I want to be.”

Here’s the problem. How can we really know what we want if we’ve never had it before? The less free we are, the less we know what freedom feels like and how it shapes who we are. The more dependent on government we become, the less we crave independence. This is why it is important to find literature that takes us out of our present moment and introduces us to different ways of thinking.

We have to imagine a different ideal.

This is why I’m nuts for a book that came out right at the end of the Gilded Age, and just before we got the permanent income tax and the Fed, as well as World War I. It is the last look at the mindset of what I could call the real “greatest generation.”

The author of The Joys of Living is Orison Swett Marden (1850-1924). I first bumped into his writing when researching the entrepreneurs of the Gilded Age. He turns out to be the great psychologist and sociologist of this generation that built the modern age in America. He was a physician, a hotel owner, and a fantastic thinker and writer. He was the editor of Success magazine, a hugely influential publication during the age when Americans adored their inventors and entrepreneurs — and deeply loved the richest of the rich among them.

Yes, it was a completely different time! The rich did not hide. People didn’t want them to. They walked the streets proudly, and people sought to emulate them. They built huge homes in the middle of town. They gave vast sums to charities, churches, and libraries and were pleased to have their names attached. They wore clothing that suited their station in life. The wealthy capitalist class was the new aristocracy, and with that status came social obligation, an elaborate code of manners and mores, and a great deal of public adulation.

It’s a world and a time I admire because it was built by the unleashing of the capitalist spirit in the second half of the 19th century. Lives lengthened. Infant mortality fell dramatically. The rich of yesterday became the middle class of today, even as tomorrow would mint the newly rich, and the process continued without end, each advance touching everyone throughout society. There were new products, new services, and new forms of communication and transportation, and each seemed to point to a future of peace and prosperity. Such inventions were celebrated in great public spectacles called World’s fairs.

Orison Swett Marden was the public intellectual who made sense of it all. He was a serious journalist, a great thinker, and a wonderful writer. His outlook embodies the ebullient optimism of the Gilded Age. He studied the phenomenon of progress and tried to discern its causes. He located them in the hearts and minds of the men and women who made the difference. He devoted his life to chronicling their lives and the lives of those they touched with their creativity and generosity.

The point was not to celebrate privilege, but rather to see the possibilities available to every person. Marden himself was like many of the first-generation rich of this period. He came from poverty. He faced family hardship. He worked his way out of difficulty to find promise and reward. He saw how the sacrifices made in youth turn to a bounty in middle age. There was cause and effect that operated in the universe: Hard work, dedication, determination, and dreams could remake one’s world and the whole world.

The greatest discovery of the time was not a technology, but a philosophy. It was the philosophy that the individual human mind was the most productive resource on the planet, more powerful than all the natural resources or man-made machinery. It was the human mind that was the real source of progress and prosperity. Previous generations believed they were trapped by fate, by class, by social position, or by forces more powerful than they. This generation saw the truth that nothing could contain an idea whose time had come, so long as there were great men and women around who believed in it and acted upon it.

This is why so many greats of his time cited Marden as their inspiration: Henry Ford, Thomas Edison, Harvey Firestone and J.P. Morgan

I read several of his books before I encountered The Joys of Living. I was hardly through the first chapter when I realized that I had found his great work. This was the philosophy he had picked up from so closely watching the nature and function of entrepreneurial success. As he saw, the key to life is to find happiness in the mystery and magic all around you, and to find ways to work within the structures you have been given to improve and generate that progress you dream of. His recipe is made of three parts: seeing, emulating, and acting.

To his mind, there are no circumstances that we face that would make doing this impossible. The source of joy is around us, but we have to seek it, see it, embrace it, and expand upon it.

This little book beautifully encapsulates the capitalist spirit of his time and all time. I’ve never seen another book like it. It is unapologetically designed to inspire, and it does this as few books I’ve ever read. It really amounts to spelling out a life philosophy, one that is deeply practical and actionable in every way, every day. Indeed, this might be the most inspiring book you have ever read — not because it solves all mysteries concerning who we are, how we got here, and what we should seek as the very purpose of life.

He stays away from these larger questions, because it’s the smaller questions that are more interesting and effective. What he deals with more directly concerns what we might call a more mundane aspect of philosophy: how we should approach each day in order to get the most out of life. As such, this is a philosophy of how to live an excellent life, no matter what our calling is. Capitalist, monk, mother, teacher, worker, banker, mechanic, musician, preacher, writer — whatever we do can be done with a sense of joy, a spirit of awe, and an ambition to drive forward the engines of progress.

This is the 100th anniversary of this forgotten classic. In some ways, this book is a relic in the best sense of that term. I don’t even believe it could be written today. We lack the social template that could produce such a work. The spirit is not in the air that could allow us to extract such thoughts. People today are too vexed, too burdened, too distracted by costs and impositions to see these things. But Marden did see them. And just because we are too often blinded to the reality that he illuminates in these pages doesn’t mean that this is not our reality too.

Note that nowhere does he talk of storming Washington, agitating for our rulers to overthrow themselves or sending institutions into upheaval, much less agitating for societal transformation and uplift. He speaks only to the individual. He tells you what you can do in your time, right where you are, to bring happiness to your life. Social and political change is an effect — it comes only after we change ourselves.

It’s the perfect time to draw attention to this work 100 years after its publication. It’s amazing to me that it had ever been lost. I’m sure that it will make a difference in your life. You might use its wisdom to make a difference in the world around you. Indeed, this is an example of the kind of book that could completely change the world. Why? Because Marden understands freedom and the individual mind, and their power, once combined, to make a gigantic difference now and in the future.

My whole experience suggests that personal inspiration is the ingredient lacking in the current generation of people who have come to love liberty. They have access to texts, knowledge, and theory as never before in human history. What they lack is a method for using what they know and the personal drive to do so. People are too quick to blame outside forces for failure without realizing that outside forces conspiring against progress are part of the structure of all environments in all times and places. This book provides that missing element, that key to brush away despair and unlock the inner drive to make a difference.

Prepare to use your highlighter tool. It will be used as never before. Then join me in finding the joys of life and working to make life more joyful for others.