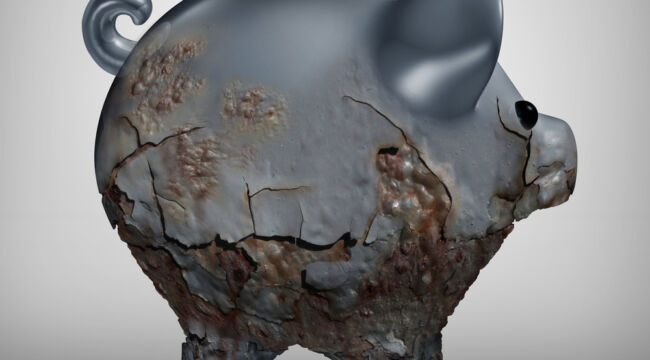 There is absolutely nothing wrong with this economy that a miracle cannot fix… to fine-tune a phrase of Alexander Woollcott.

We believe the economy was going at partial throttle even before the pestilence ran it down.

It gave the appearance of an exotic racing auto — sleek, finely lined, waxed to a blinding sheen…

Unemployment had plunged to 50-year lows. The stock market knocked down one record after the other. The consumer was flush… and eager to drain his wallet.

But beneath this racer’s shining surface lurked a lemon…

The Look Under the Hood

The transmission slipped gears. Cracks ran through the pistons. Rust corrupted the engine block… and oil oozed from every seam.

Account for those hopeless unemployed who had abandoned the search, argues ShadowStats… and the true unemployment rate may have scaled 20%.

Meantime, much employment last decade came within the low-wage service and hospitality industry.

That is the same service and hospitality industry knocked out by the virus… incidentally.

But these are not, in the main, “breadwinner jobs.”

And our consumer, superficially flush, was gulping loads of debt to keep him floating.

If Not the Virus, It Would Have Been Something Else Eventually

This gaudy but citrusy roadster was bound to go wrong soon or late. The post-financial crisis expansion already ran to record distances.

The virus finally sent the smoke billowing from the hood. But if not the coronavirus… another bugaboo would have sent it veering off the asphalt.

We hazard the deceleration would have been far less sudden, the jolt far less violent, the breakdown less dramatic.

But a mechanical discombobulation of one sort or other was long past due. And here it is.

Of course here is the question on all lips:

When will the economy retake the road?

Savings Will Save Us

Worry not, coo the glass-half-fullers. The economy is recuperating in the auto shop.

Once we turn the key, it will come busting to life like a stallion from the barn. We will have a V-shaped recovery. You watch.

They inform us, for example, that the consumer has been storing in cash. Trading Economics reports the savings rate has stretched to a walloping 13.1%.

These savings will go flooding into the economy once the doors swing open. This spending will drive the recovery along. It will cut a lovely “V” into the road.

But will it? We have questions. Here is one:

Do these savings actually exist?

As Lance Roberts reports — he of Real Investment Advice — the 13.1% savings rate represents a gorgeous fiction.

These savings are densely concentrated within the utmost income brackets. The bottom 80% are so loaded down… they can scarcely save a jot. Their tanks are empty.

And the lower 90% have maintained negative savings rates since the 1990s: 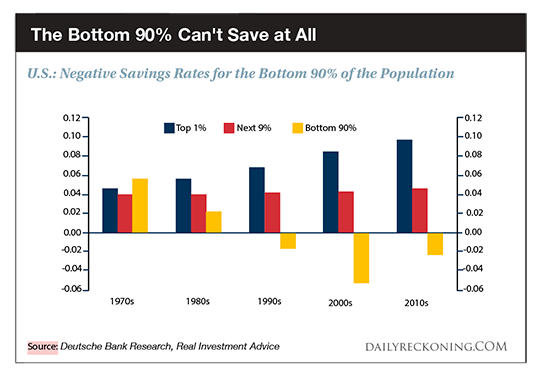 Here Roberts drives a shaft of light through the statistical fogs:

Since the top income earners have more than enough income to maintain their standard of living, the balance falls into savings. This disparity in incomes also generates a “skew” to the savings rate…

“Savings” are confined to the top 10% of income earners, as the bottom 90% struggle to make ends meet by increasing debt levels.

While government numbers suggest average Americans are saving 13% of their income, the majority of “savings” is coming from the differential in incomes between the top 20% and the bottom 80%.

In other words, if you aren’t in the “top 20%” of income earners, you probably aren’t saving a chunk of money.

Over 38 million Americans are presently off the job. And so the fuel tank of savings runs drier yet.

How will their nonexistent savings drive the economy back?

The upper 20%, meantime, will not likely raise their spending above existing levels. Roberts:

The issue with the lack of savings for the bottom 80–90% is that economic growth is roughly 70% consumption. Those in the top 10%, which have capacity to spend, have little need to substantially increase their rate of spending.

Americans are not “saving more money”… Unless, of course, you are in the top 20% of income earners.

By the time the current recession and bear market are over, it will take much longer than anticipated for the economy and markets to bounce back. Each recovery has already been slower, and weaker, than the last, and the next recovery will be no different.

With growth rates below 2% on average, wage growth suppressed and a large contingent of boomers withdrawing assets to sustain their living requirements, the ability to generate higher levels of economic growth will be limited.

We cannot therefore expect savings to haul us up.

In a balanced economy with piles of savings in back of it, they very well could.

The economy could have held on until the trial passed… and sidelined cash would have come pouring back in.

But the economy is not a balanced economy. And piles of savings are not in back of it. Piles of debt are instead on top of it.

And so limited progress is likely ahead of it.

An economy swaybacked under piles of debt cannot make much headway. The load is simply too heavy.

As we have maintained before, productivity is the spring of authentic long-term prosperity…

For centuries the United States went up on a rising tide of productivity. Leaping productivity gains of the 19th and early 20th centuries lifted it from stump-toothed backwater to global colossus.

These advances continued past midcentury…

Productivity growth averaged 4–6% for the 30 years following the Second World War. But since 1980?

Average productivity has languished between 0–2% — a 40-year running in place.

What about American labor productivity? Has the American worker kept up?

Labor productivity averaged 3.2% annual growth from World War II through the close of the 20th century. But since 2011?

Look to the Federal Reserve

We do not believe worker productivity has declined because the American worker took to snoozing on the job.

We point our finger in another direction entirely… to institutions beyond his control.

Analyst Michael Lebowitz robs our thunder when he writes:

The stagnation of productivity growth started in the early 1970s. To be precise it was the result, in part, of the removal of the gold standard and the resulting freedom the Fed was granted to foster more debt… Over the last 30 years the economy has relied more upon debt growth and less on productivity to generate economic activity.

More of Everything, Except Growth and Productivity

It has once again nailed interest rates to zero. And it has ballooned its balance sheet to $6.96 trillion — far past its previous $4.5 trillion limit.

It is likely stretching to $10 trillion… and beyond.

Meantime, each fresh dollar of debt gives less economic thump than the last.

But it will not turn back now. It is already too far down the roadway.

Where will the productivity originate? We cannot say.

Yet until it comes, we can expect more of the same…

More debt, more warfare against savers, more monetary and economic bedlam, more of all of it  — only more so.