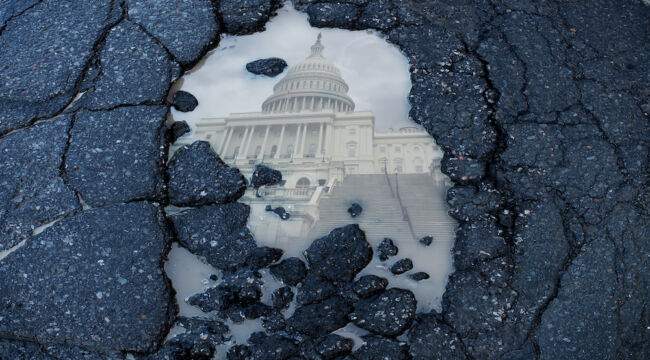 19 Republican members of the United States Senate hoisted a truce flag… came to terms with their Democratic foes… and signed their names a $1.2 trillion “infrastructure” bill.

Which senators got the heaviest sugaring?

We do not have all answers at this time. We have instructed our minions to investigate the particulars.

We ordered them off at flank speed, and informed them we expect a detailed report very, very soon.

Our men have shoveled up one telling detail, very much in point…

The United States Senate is a house divided against itself — plum down the middle — 50-50.

Senator Joe Manchin is the senior senator from the state of West Virginia. He is a Democrat.

Yet Senator Manchin is widely considered a “moderate” Democrat. He will graze against the grain when his conscience demands it… and buck his party.

He is therefore a sort of makeweight.

He can lower his thumb upon the legislative scales… and throw them tipping in either direction.

Given the senatorial mathematics, Democrats need him thumbing the scales their way. Else they are unable to shoulder through their ambitious agenda.

Thus an “open for business” sign hangs upon his door in the Hart Senate Office Building.

He can charge pretty premiums for his allegiance: “What do I get in return?”

It’s Not What You Know…

The Infrastructure Investment and Jobs Act — of which Sen. Manchin is a sponsor — jams $1 billion into the back pocket of the Appalachian Regional Commission.

Please ask yourself this question:

Is it coincidence that the Infrastructure Investment and Jobs Act — of which Sen. Manchin is a sponsor — jams $1 billion into the back pocket of the Appalachian Regional Commission?

For the matter of that… is it coincidence that Mr. Biden nominated Mrs. Manchin to chair the Appalachian Regional Commission in the first instance?

We hazard these are not coincidences. Yet we have additional questions…

Why Did 19 Republicans Go Along?

Why did 19 Republican senators sign their names on Mr. Biden’s dotted line?

Why did these illustrious gentlemen and ladies deliver him a political win?

That is, tied up to a $3.5 trillion bread and circuses extravaganza.

Do we speculate? We do not speculate.

Speaker Pelosi has already declared her intent. She has already spread her playing cards upon the gaming table.

Pelosi, since the infrastructure talks launched in earnest months ago, has adopted the position that the House will not turn to the $1 trillion infrastructure package until the Senate passes a much larger $3.5 trillion package chock full of Democratic social benefits programs and climate initiatives…

The Speaker has also been clear that the infrastructure package alone is insufficient to tackle the challenges facing the country when it comes to economic inequality, health care disparities, workers rights and the warming planet. It’s those issues that Democrats will address in the second legislative package, which is expected to move under special budget rules, known as reconciliation, which preclude the Republicans’ filibuster powers and allow Senate Democrats to pass the measure with a simple majority.

A second Hill article affirms Republicans knew well the “bait and switch” for which they were falling:

The Republicans knew ahead of time that there would be another bill with a total price tag of $3.5 trillion. They were told of the bait and switch. The second spending plan is led by the self-described democratic socialist, Sen. Bernie Sanders (I-Vt.). No matter what Republicans say about making it painful for Democrats to pass the second bill, their ignorance of reality is how this will be used against them.

Minority Leader Mitch McConnell seems to believe he holds an ace card up his shirtsleeve — the debt ceiling.

The debt ceiling represents the total amount of money the federal government is authorized to borrow.

That is, above the previously established ceiling.

Ms. Janet Yellen and her Treasury Department have begun resorting to “extraordinary measures” to keep the government in funds.

Yet the Congressional Budget Office estimates the national strongbox will empty in October or November — absent a deal.

How can a government running a $2 trillion budget deficit… rub along if it cannot constantly borrow?

The question is the answer.

Each and every species of calamity would follow, we are warned. Ms. Yellen moans about the “irreparable harm to the U.S. economy and the livelihoods of all Americans” that would befall the nation.

Will Republicans Use the Debt Ceiling as Leverage?

But Senator McConnell has summoned his blood… drawn his line in the beach sand… and hunkered in.

He will not aid and abet Democrats’ $3.5 trillion spree, he thunders:

Our friends across the aisle should not expect traditional bipartisan borrowing to finance their nontraditional reckless taxing and spending spree. That’s not how this works.

Senate Democrats are wagering that the senior senator from Kentucky will buckle under the political pressure that will fall upon his slender shoulders.

Washington Senator Patty Murray, a Democrat, gives him a dare:

“Nobody wants to be responsible for a major economic disaster. So my guess is in the fall, he won’t be saying that.”

“I am predicting, with absolute certainty, it will resolve itself uneventfully. Because it always does.”

Look what I have right here: These are all the quotes of Mitch McConnell, who has said, ‘We will never have America default.’ And he’s right. At the end of the day, Republicans understand … they’re not going to destroy the economy.

We are with Senator Sanders and his Democratic mates…

Senator McConnell and his Republicans will blink their eyes. They will erase the line they drew across the sand.

They will agree to raise the debt ceiling.

We will eat each and every word of this article — without salt, without butter — if wrong.

There may be some limited breaking of lances for honor’s sake.

Some slight amount of blood might be drawn… as sometimes blood is drawn in a professional wrestling bout.

And for the same reason — to give a good show.

But the blows are false, and the combat is staged.

Democrats may agree to scalpel out some blubber from the flanks of the $3.5 trillion enormity they propose.

Republicans will proceed to raise their arms in victory. They will yell about delivering a blow for fiscal conservatism.

They will then agree to raise the debt ceiling… and shake hands on a $3.49 trillion bill.