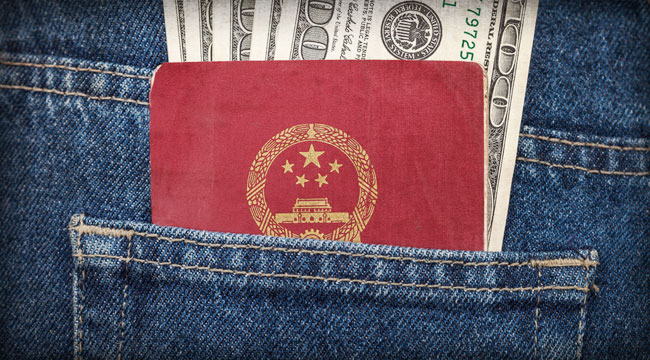 China is undergoing wide-ranging economic reforms. There will be winners, and there will be losers…

China’s powerful leadership is backing away from the stimulus measures it’s used in the past. Stimulus used to involve ordering banks to unleash a wave of new lending.

But the marginal benefit of new lending has fallen. GDP growth has lagged credit growth for the past two years, as shown in the chart below. And the growth rate of credit continues to slow: 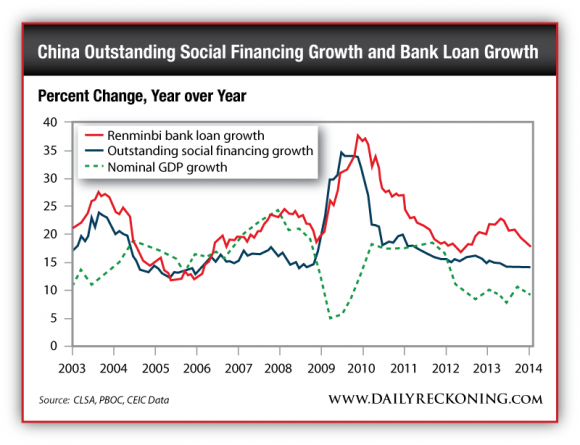 Funds from WMPs are invested in a range of instruments including corporate bonds, trust loans and securitized loans. There are reports of multiple claims on underlying collateral, which, understandably, has stirred up a panic among WMP investors.

The Chinese government will commit limited resources to plugging holes from defaulted WMPs coming due; resources won’t be wasted on another credit boom.

Instead of reflating old bubbles, Chinese leaders are targeting services and technology with supply-side reforms. This week, there were media leaks that the leadership will announce another move to liberalize capital flows: allow Chinese savers to invest more money outside mainland China.

“Chinese savers, now locked into low deposit rates, must be given legitimate alternatives to putting their savings into property speculation or dodgy wealth management products. Opening up domestic capital markets to freer flows of foreign capital while permitting individual Chinese investors to acquire foreign stocks will lead to more mature, deeper stock markets at home. At the same time, Chinese investors will be given the opportunity to invest their savings in Chinese companies operating in legally more secure environments and listed on more transparent exchanges outside of the mainland…

“The total impact on Hong Kong and other foreign capital markets of the outflow of Chinese savings is difficult to estimate. The QDII2 program itself would only be another limited step towards overall capital account liberalization. But assuming freedom to move capital across borders, the IMF in an August 2013 working paper estimates that between $600 billion and U$1.5 trillion in new outflows could materialize, accounting for up to 3% of global financial markets.”

If China eventually allows full cross-border movement of capital, an estimated $1.5 trillion in savings could exit China. Such a move may be a long way off. But steps in that direction indicate that China’s leadership is no longer interested in strong-arming the nation’s savings into supporting bank-funded construction projects — projects with rapidly declining marginal returns.

Chinese construction has passed its most intense phase. Chinese leaders will try to consolidate and shore up ill-advised construction projects and related loans, rather than push aggressively into new ones.

China’s construction sector isn’t the only one dealing with a hangover. Its coal industry is in a state of crisis.

“If coal prices continue to slide, it will be hard for many companies to survive,” says Weng Qing An, CFO at China’s second-largest coal producer. “The whole industry will undergo a major consolidation.”

Activity in China’s coal country, Inner Mongolia, has ground to a halt. A few years back, the area was filled with boomtowns. But weaker domestic coal demand and low-cost imports from Australia have taken their toll. Coal prices are so low that miners still in business have resorted to slashing employee wages.

“The bigger [coal companies] can stomach the losses to maintain market share, but those without financial muscle have stopped production,” Li Ji, a coal analyst at Galaxy Futures, told Reuters. Reuters summarizes what it found on a recent trip:

“In the Ordos mining district — which accounted for a fifth of China’s coal output at its peak in 2012 — about half of the 20 private mines [we visited] were shut, rows of coal excavators and trucks locked away in their yards.”

Were any of those idle trucks or coal excavators made by Caterpillar (CAT)? If not, then they were made by CAT’s competitors — probably its Chinese machinery competitors.

The evidence is clear: CAT faces a brutal hangover in demand for coal mining and construction equipment in China.

Not only are customers not buying at anywhere close to the pace of recent years, but CAT also faces tougher matchups globally from much-improved Chinese machinery competitors. The Financial Times ran a story describing how oil and mining companies are switching to Chinese equipment to save money:

“Miners such as Rio Tinto and Antofagasta have already been encouraged by improvements in the reliability of Chinese machinery, which they say can now be integrated into their existing operations without compromising efficiency or safety standards.

“But the oil company’s shift to lower-cost Chinese manufacturers underscores the potential threat to Western industrial equipment makers, such as Caterpillar and Joy Global from their competitors in emerging markets…

“Antofagasta, the FTSE 100-listed miner, is now using more Chinese-sourced kit to cut the cost of its projects. Diego Hernandez, chief executive, said the quality of Chinese equipment was increasingly comparable to that produced by Western manufacturers. ‘They now have shovels that can compete in equal conditions with Western shovels,’ he said.”

As the Chinese coal industry reforms and consolidates, it’s inevitable that coal production will fall.

There is more bad news in the pipeline for CAT shareholders. In the next few quarters, management should admit that China’s construction binge artificially inflated demand for equipment, and that there will be no recovery to old levels of demand.

Ed. Note: There is plenty of bad news floating around the markets these days. Enough to make even the most seasoned investor wonder what’s best for his money. That’s exactly why we write The Daily Reckoning email edition, and it’s currently showing over half a million subscribers how to grow their wealth in uncertain times every single day. Sign up for FREE, right here, to make sure you’re one of them.