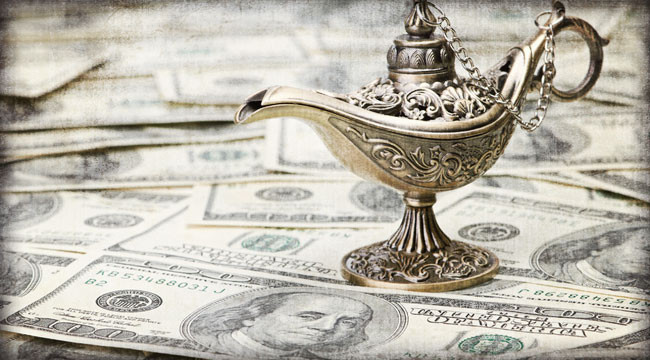 The Illusion of Wealth: What QE Can and Cannot Do

A “wealth effect” is widely believed to be boosting the U.S. economy. Rising stocks and house prices are supposed to unleash a new age of prosperity. If that’s the case, why isn’t prosperity spreading broadly and uniformly across the entire economy?

The answer lies in the inflation-fueled booms. They transfer purchasing power from the economy’s savers to those with first access to the new money supply. That’s Wall Street and recipients of federal government spending. The Federal Reserve’s quantitative easing (QE) is the source of the inflationary boom.

New money supply is flooding New York City, raising the price level. It creates the illusion of prosperity. The situation can only last as long as new money keeps flowing. As long as it does, federal deficits feel painless, almost pleasant. But without the printing press, savings must be diverted from other uses to fund Treasury bond issuance.

Politicians now talk about the deficit falling rapidly. But a set-in-stone rise of old-age entitlement spending awaits us in the future.

Do you really think the Fed would abandon QE? Not unless it’s willing to risk unleashing the dreaded deflationary spiral.

As the towering edifice of public and private debt continues to grow, monetary policy needs to remain easy. If not, the wealth illusion evaporates. That’s when demand for cash soars and debts start acting as an anchor, dragging the economy into depression. A similar dynamic prompted the Fed to start desperate printing operations in late 2008.

“Washington is increasing public spending and attendant debt ceilings, and forcing the Fed to continue QE so government can continue subsidizing diminishing economic incentives in the private sector (a truly awkward transfer mechanism). The point here is that we have a very well-established road map and a very well-established inflation trend. The public does not seem to get it yet. There is a popular misunderstanding that the great majority of savings and investments are collateralized in currencies that are not being diluted and do not have to be greatly diluted in the future.

“The Fed must increase QE (not taper it) because systemic debt is compounding faster than production, and interest rates are already zero-bound [emphasis his]. My colleague Lee Quaintance noted many years ago that the Fed was holding a burning match. This remains true today, only it is a bomb with a short fuse. Thirteen years after the overlevered U.S. equity market collapsed, 11 years following Bernanke’s speech, five years after the overlevered housing bubble burst and four years into the necessary onset of global zero interest rate policies and long-term refinancing operations, global monetary authorities seem to have run out of new outlets for credit.”

Brodsky includes the following chart showing total U.S. dollar credit (or debt) divided by nominal GDP (NGDP). He explains why, in real economic terms, central bank policies have become ineffective: “The high plateau to the right suggests that ever-increasing credit growth is struggling to maintain economic production. In other words, the U.S. is now producing more new debt than goods and services. 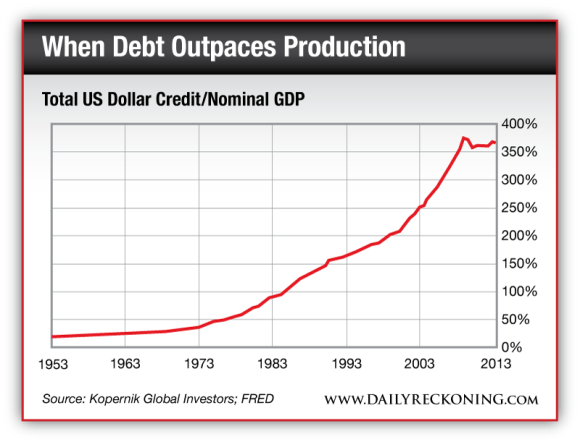 “The elephant in the room,” Brodsky concludes, “is that while economic policies that target rising nominal GDP may make it easier to service outstanding debt (if NGDP rises from demand growth, rather than price inflation), they do not make it easier to repay that debt.”

Janet Yellen, the nominee to replace Fed chairman Ben Bernanke in 2014, probably thinks a lot about how to use inflation to target nominal GDP. She believes higher nominal GDP will lead to more jobs. In order to implement such a plan, she’ll have to keep QE going at a rapid pace. Tapering would be out of the question. On the contrary, an increase in QE may be on the policy menu.

But it’s not that simple, as Brodsky points out. QE merely liquefies the assets sitting on bank balance sheets. It has not improved — nor is it likely to improve — the real economy, including the job market. Consider the recent slowdown in the ADP jobs numbers despite the galloping pace of QE.

We agree with Brodsky that QE can’t stimulate the real economy. Job market data should remain soggy due to factors that have nothing to do with a shortage of money supply. New money supply can’t cure what ails the job market. In fact, by propping up stale bubbles and unproductive economic activity, QE is working against the establishment of a healthy, sustainable job market.

That raises an interesting question: How might the Fed react if the job market continued weakening despite QE? Do you really think the Fed would abandon QE? Not unless it’s willing to risk unleashing the dreaded deflationary spiral. No, the Fed would predictably increase QE in response to further job market weakness.

Traders hanging on every word of the Fed regarding the timing of tapering miss the big picture: QE doesn’t have the power to boost this debt-saturated economy. But the Fed can’t turn back now. It’s gone too far down the road of creating a wealth illusion.

Ed. Note: If illusions of wealth are all we have left, that means people are completely oblivious to what real wealth is. Of course, readers of The Daily Reckoning email edition are all too aware of this notion, and they’re given at least 3 opportunities every day to obtain as much real wealth as they can. Sign up for the free Daily Reckoning email edition and get the kind of wealth building info you can’t get anywhere else.