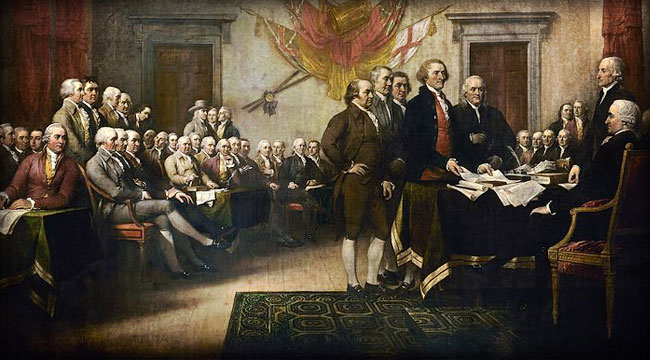 The Idea of America

Our attention today is on neither the Old World nor the New one — but the ever-changing, never-fully-explored idea of America.

“Proud to be an American” says one bumper sticker. “One nation — indivisible,” says another. America was, of course, founded on the opposite principle…the idea that people were free to separate themselves from a parent government whenever they felt they had come of age. But no fraud, no matter how stupendous, is so obvious as to be detected by the average American. That is America’s great strength…or its most serious weakness.

In a DNA test, your correspondent is more likely to be mistaken for an IRA hit man than a Baltimore drug dealer.

After September 11, so many people bought flags that the shops ran short. Old Glory festooned nearly every porch and bridge. Patriotism swelled every heart.

Europeans, coming back to the Old Country, reported that they had never seen anything like it. A Frenchman takes his country for granted. He is born into it, just as he is born into his religion. He may be proud of La Belle France the way he is proud of his cheese. But he is not fool enough to claim credit for either one. He just feels lucky to have them for his own.

America, by contrast, is a nation of people who chose to become Americans. Even the oldest family tree in the New World has immigrants at its root. And where did its government, its courts, its businesses and saloons come from? They were all invented by us. Having chosen the country…and made it what it is…Americans feel more responsibility for what it has become than the citizens of most other nations. And they take more pride in it too.

But what is it? What has it become? What makes America different from any other nation? Why should we care more about it than about, say, Lithuania or Chad?

Pressed for an answer, most Americans would reply, “Because America is a free country.” What else can be said of the place? Its land mass is as varied as the earth itself. Inhabiting the sands of Tucson as well as the steppes of Alaska, Americans could as well be called a desert race as an arctic one. Its religions are equally diverse — from moss-backed Episcopalians of the Virginia tidewater to the holy rollers of East Texas to the Muslims of East Harlem. Nor does blood itself give the country any mark of distinction. The individual American has more in common genetically with the people his people come from than with his fellow Americans. In a DNA test, your correspondent is more likely to be mistaken for an IRA hit man than a Baltimore drug dealer.

America never was a nation in the usual sense of the word. Though there are plenty of exceptions — especially among the made-up nations of former European colonies — nations are usually composed of groups of people who share common blood, culture, and language.

Americans mostly speak English. But they might just as well speak Spanish. And at the debut of the republic, the founding fathers narrowly avoided declaring German the official language…at least, that is the legend. A Frenchman has to speak French. A German has to speak the language of the Vaterland. But an American could speak anything. And often does.

Nor is there even a common history. The average immigrant didn’t arrive until the early 20th century. By then, America’s history was already 3 centuries old. The average citizen missed the whole thing.

Neither blood, history, religion, language — what else is left? Only an idea: that you could come to America and be whatever you wanted to be. You might have been a bog-trotter in Ireland or a baron in Silesia; in America you were free to become whatever you could make of yourself.

“Give me liberty or give me death,” said Patrick Henry, raising the rhetorical stakes and praying no one would call him on it.

“Give me liberty or give me death,” said Patrick Henry, raising the rhetorical stakes and praying no one would call him on it. Yet, the average man at the time lived in near perfect freedom. There were few books and few laws on them. And fewer people to enforce them. Henry, if he wanted to do so, could have merely crossed the Blue Ridge west of Charlottesville and never seen another government agent again.

Thomas Jefferson complained, in the Declaration of Independence, that Britain had “erected a multitude of New Offices, and set hither swarms of Officers to harass our people, and eat out their substance.” Yet the swarms of officers sent by George III would have barely filled a mid-sized regional office of the IRS or city zoning department today.

Likewise, the Founding Fathers kvetched about taxation without representation. But history has shown that representation only makes taxation worse. Kings, emperors and tyrants must keep tax rates low…otherwise, the people rise in rebellion. It is democrats that really eat out the substance of the people: the illusion of self-government lets them get away with it. Tax rates were only an average of 3% under the tyranny of King George III. One of the blessings of democracy is average tax rates that are ten times as high.

“Americans today,” wrote Rose Wilder Lane in 1936, after the Lincoln administration had annihilated the principle of self-government…but before the Roosevelt team had finished its work, “are the most reckless and lawless of peoples…we are also the most imaginative, the most temperamental, the most infinitely varied.”

But by the end of the 20th century, Americans were required to wear seat belts and ate low-fat yogurt without a gun to their heads. The recklessness seems to have been bred out of them. And the variety too. North, south, east and west, people all wear the same clothes and cherish the same decrepit ideas as if they were religious relics.

And why not? It’s a free country.

Ed. Note: This essay was prominently featured in the Daily Reckoning’s free email edition — a free newsletter that deals with all of the issues facing America’s broken political and financial system. If you’re not yet receiving the Daily Reckoning email, sent straight to your inbox every day around 4PM, you can sign up for free, right here.