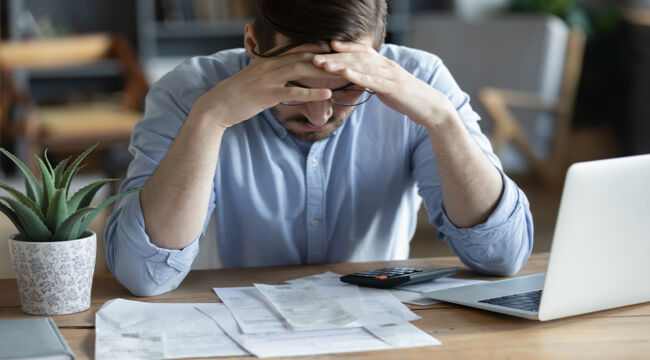 The Grim Mathematics of Debt

But whence will growth originate?

Since the Great Financial Crisis the monetary and fiscal authorities have conjured over $43 trillion from the great void of nothingness.

Within the past 24 months alone, the Federal Reserve has plucked — from the same vast void — 50% more dollars than all dollars that ever existed in 256 previous years of American history.

Each of these dollars are representations of debt… as are all dollars under the present monetary arrangement.

In all, the United States groans and gutters under $92 trillion of debt, public and private combined.

The buckling legs are unequal to the task.

Since the aforesaid Great Financial Crisis the United States economy has expanded a cumulative $4.05 trillion.

That is, the economy can boast only $4.05 trillion of growth for the $43 trillion of debt it has taken aboard.

That is, each dollar of growth required nearly $11 of debt-financed “stimulus.”

And so the Keynesian “multiplier” — the promised miracle of water into wine — is reduced to a sad, sad jest.

It has been proven the false magic of a false prophet.

The multiplier sags far below one. Thus the miracle of water into wine yields vinegar.

How did the nation arrive at such a dismal pass?

The Long, Twisting Path to Insolvency

The long and meandering roadway stretches to the Great Depression. The way became clearer in 1971 — when old Nixon scissored the dollar’s remaining gold tethers.

But after 2008 all obstacles were cleared away…

Anti-inflationists yelled that the trillions and trillions of quantitative easing would yield a terrible inflation.

It did not — the anti-inflationists were boys yelling wolf— and disinflation prevailed for the following decade.

Meantime, doomsdayers shrieked that ballooning deficits would reduce the economy to wreckage.

Yet doomsday never dawned. The economy pegged along at a languishing gait, yet it did not wreck.

And so the inflationists and the spenders took tremendous heart.

They believed they could fabricate a near infinity of dollars without inflationary evils and tally fantastic deficits without economic destruction.

With all seeming checks removed, they carried on with predictable abandon.

Manna, it was, as if from heaven itself.

Turn a child loose in the candy store… or a drunkard in a liquor store… and you have the flavor of it.

When the pandemic flattened the economy in 2020 the federal government spewed trillions and trillions of dollars in relief.

The previous decade’s experience instructed policymakers that inflation was a phantom menace and that interest rates would remain caged — regardless.

When the 2020 pandemic necessitated a major federal response, both parties eagerly passed a $3 trillion bill that would have been unfathomable even a year earlier.

Up to this point, the most expensive recent federal expansions had been implemented during recessions, with the goal of sustaining demand. But progressive lawmakers, economists and commentators saw the lack of negative macroeconomic consequences as proof that monetary and fiscal expansions had become a free lunch that could be greatly expanded — even during non-recessionary times.

After all, if rising inflation and interest rates have been permanently defeated, then why listen to those paranoid deficit scolds stopping us from ending poverty and building a comfortable social democracy?

Soon or late the bill comes slamming upon the table. And that time may be now.

That is, the era of “free-lunch economics” may be through. Riedl:

We may soon look back on the 2009–2021 period as the era of “free-lunch economics,” when hubristic politicians and economists declared that traditional fiscal and monetary trade-offs no longer existed in any meaningful form. Advocates portrayed a new economy liberated from restraints, one in which money-supply expansions and congressional deficit spending could finance benefits that would make even Western Europeans envious, with no economic drawbacks. As in foreign policy, this utopian vision proved to be an illusion. Reality has intruded.

The “free-lunch” experiment has collapsed. Inflation has jumped past 8% for the first time in 40 years — reaching [9.1% in June]… real wages are falling and economic growth is dipping. Budget deficits are now projected to soar past $2 trillion within a decade, even assuming peace, prosperity and the scheduled expiration of most of the 2017 tax cuts.

For more than a decade, progressive lawmakers, economists and activists sold Americans a fantasy in which the printing press and ambitious deficit spending could buy a European-style welfare state without incurring costs. With Washington already facing $112 trillion in baseline deficits over the next three decades, adding trillions more in unfinanced benefits was never realistic. Congress must come back to reality: There is no free lunch.

Will Congress return to reality… and accept the honest costs of lunching?

We harbor very little confidence that it will. And why should we? Where is the evidence?

Prior even to the pandemic, the Congressional Budget Office estimated Congress would need to hack the budget 10% per year.

The hackings, twinned with tax hikes, were the only route back to fiscal health.

Can you imagine Congress spending 10% less money each year?

As we have written before: The pig in his sty will first sprout wings and take to the aerial ways.

Nor will Congress raise the necessary funds to keep the show going.

Thus debt — already a millstone heavy upon the neck — will weigh more and more.

It will form an impossible drag upon growth.

Meantime, CBO currently projects American economic growth to peg along at an average 1.8% per annum for the next decade.

In contrast, average annual growth of 3% or more was common before the great gale of 2008.

A 1.2% disparity may not appear dramatic — and one year to the next it is not.

But multiply the business by five years, 10 years, 20 years or more.

If America does not lick its debt, it is a lesson it will learn plenty good… and plenty hard…