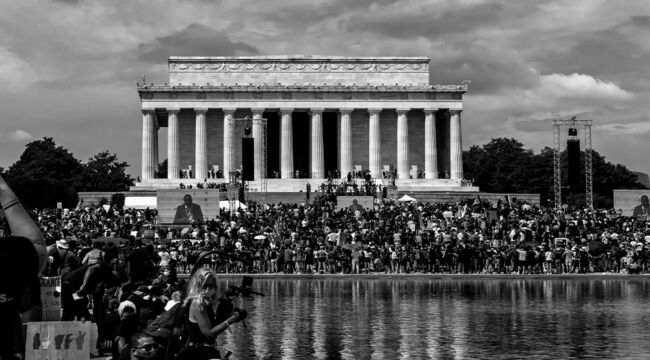 “This is America’s day. This is democracy’s day. A day of history and hope. Of renewal and resolve…

And at this hour, my friends, democracy has prevailed. So now, on this hallowed ground where just days ago violence sought to shake this Capitol’s very foundation, we come together as one nation, under God, indivisible, to carry out the peaceful transfer of power as we have for more than two centuries.”

We sobbed tears of patriotic rapture Wednesday… as the freshly inaugurated President Biden babbled his sermon upon the Capitol steps.

His shames all prior inaugural talks. Washington’s could never come within miles of it. Nor could Lincoln’s.

Not even the departing president’s inaugural could approach it.

Here was democracy in full bloom… on the very site where violent Trump insurrectionists two weeks prior laid siege to America’s highest temple of democracy… and held its elected officials in terrified subjection.

One of these hellcats even disguised himself as a Viking to mask his appearance. Another cloaked himself in bird feathers.

Other seditionists defiled the temple by lounging about with their feet on desks and grinning for cameras.

But to return to Wednesday…

We wobbled at times, admittedly, dizzied and delirious with patriotic fevers.

An acquaintance even insists we slipped into a sort of ecstatic trance at one point… as if we had glimpsed God Almighty.

“My goodness,” we supposedly mumbled as we abandoned our senses.

We have no recollection of the incident whatsoever. But we have never known this fellow to fib. It is possible these are the words that rocked us:

Bringing America together. Uniting our people. And uniting our nation.

If this passage does not moisten your eyes… if it does not reduce your legs to jelly… you are one stoneheart — or worse — a potential traitor to the United States.

You possibly harbor seditious sympathies for the Kremlin.

Perhaps, even, for Mar-a-Lago.

He recalled us to our highest duties as American citizens — indeed, as world citizens…

A Call to Action

A cry for survival comes from the planet itself. A cry that can’t be any more desperate or any more clear.

Yes, we have heard it. We can affirm the planet’s shrieking is desperate. And that it is clear.

It is on its knees pleading for higher carbon dioxide emissions to feed its undernourished trees and plants.

Carbon dioxide is, after all, their food.

Earth bemoans us wicked humans who plot to limit their rations.

“If you wish to go green,” the planet begs, “please feed my flora more carbon dioxide. I will even reward you with higher crop yields to feed your growing population.”

Yet the planet’s wailings go unheeded.

Thus we join Earth in its desperate struggle for life… and request President Biden’s fullest commitment to deliver it nourishing food.

A Time for Boldness

Not only does Earth dangle in the balance. But democracy. Truth. And more. The president continued:

This is a time of testing. We face an attack on democracy and on truth. A raging virus. Growing inequity. The sting of systemic racism… It is a time for boldness, for there is so much to do.

Thus we declare ourself a member of the regiment. We will march in step… and sacrifice what we must for the common weal…

Be it blood. Be it treasure. Be it our very soul.

And so we repudiate the inauguration yells of a prior president — Mr. Calvin Coolidge — and reject his evil counsel:

Was this dunce unaware that government waste does not exist… that each dollar it spends falls into a private lap somewhere? Here atrocity piles upon atrocity:

Taxes are theft? The 7th Fleet should be peddled for scrap? Cal would have you believe it:

The wisest and soundest method of solving our tax problem is through economy…The collection of any taxes which are not absolutely required, which do not beyond reasonable doubt contribute to the public welfare, is only a species of legalized larceny. Under this republic the rewards of industry belong to those who earn them. The only constitutional tax is the tax which ministers to public necessity. The property of the country belongs to the people of the country. Their title is absolute. They do not support any privileged class; they do not need to maintain great military forces; they ought not to be burdened with a great array of public employees…

Cal continued in the same witless and heartless vein:

I am opposed to extremely high rates, because they produce little or no revenue, because they are bad for the country, and, finally, because they are wrong. We cannot finance the country, we cannot improve social conditions, through any system of injustice, even if we attempt to inflict it upon the rich. Those who suffer the most harm will be the poor. This country believes in prosperity. It is absurd to suppose that it is envious of those who are already prosperous. The wise and correct course to follow in taxation and all other economic legislation is not to destroy those who have already secured success but to create conditions under which everyone will have a better chance to be successful.

Can you imagine it? Let us set this fellow down — posthumously — as an enemy of the American people and a menace to their democratic happiness.

What is more… we are reliably informed that old Cal thumbed aside this indisputable fact:

The national debt is debt we owe ourselves.

Did he not realize that a nation indebted is a nation enriched?

We are consoled only by this knowledge: That there are no more Calvin Coolidges among us. They do not exist.

To Hell With Madison

We occasionally find ourself out of joint… and the world’s sorrows gnaw at our heart.

In these instances — which are increasingly common — we are soothed by this happy fact:

We are an American citizen, stabled proudly under the democratic folds of the stars and stripes.

Thus we denounce Madison for writing, “democracies have ever been spectacles of turbulence and contention.”

He ventured so far as to argue that democracies:

“Have ever been found incompatible with personal security or the rights of property; and have in general been as short in their lives as they have been violent in their deaths.”

Let Madison have his undemocratic republic. We throw in with democracy — the more direct, the better.

We therefore demand the immediate demolition of perhaps the most anti-democratic institution in existence:

This Constitutional relic spits upon the divine doctrine of majority rule. It counts land over people.

It is time to empty Madison into the trash can.

Once out of the way, we majoritarians will never lose a presidential election again.