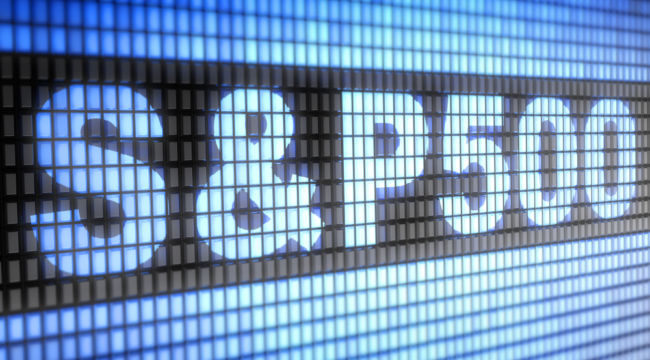 The Great Paradox of Today’s Market

Just this Wednesday the Federal Reserve announced its eighth rate hike since the business began in December 2015.

Since October last, it has also been pumping liquidity from its balance sheet — at least $220 billion to date — with more on tap.

That is, the central bank has been “tightening” on two fronts.

Yet we are reliably informed that overall financial conditions are easing.

Not only are financial conditions easing… by one metric they are the easiest in 25 years.

And so we arrive at a thumping paradox:

If money is becoming tighter… why are financial conditions so easy?

The Chicago outpost of the Federal Reserve operates a gadget called the National Financial Conditions Index.

The Chicago Fed’s National Financial Conditions Index (NFCI) provides a comprehensive weekly update on U.S. financial conditions in money markets, debt and equity markets and the traditional and “shadow” banking systems… [It] summarizes different financial indicators and, because they measure financial stress, can serve as a barometer of the health of financial markets.

1. Risk Subindex. This looks at volatility and funding risk in the financial sector.

2. Credit Subindex. This looks at measures of credit conditions.

3. Leverage Subindex. This looks at debt and equity measures.

Any reading of zero or above is a warning of coming financial weather.

Economic recessions are also in prospect when the index exceeds zero.

Substantially positive readings accompanied the deep recession of the early 1980s, for example.

When the National Financial Conditions Index is below zero — on the other hand — it indicates easy waters all around.

What is the index’s latest reading?

It is the lowest reading since September 1993… long before quantitative easing twinkled in Ben Bernanke’s beady eye.

This despite rising interest rates and the Fed’s assaults upon its balance sheet. 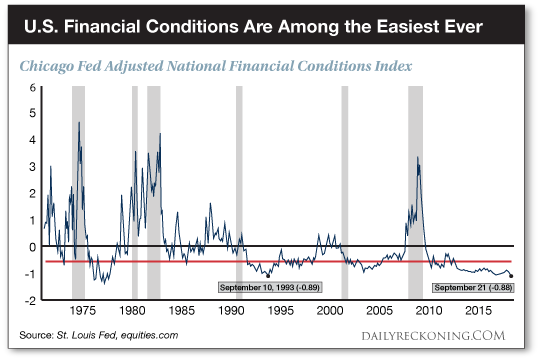 What are we to conclude from today’s improbable reading?

The good news is that the latest weekly score of [negative 0.88] and the latest monthly reading of negative 0.86 are well below the 0.00 mark, which has tended to signal more difficult times ahead for the S&P 500.

That is not all:

Better still, the Chicago National Financial Conditions Index has only tended to reach zero when the fed funds rate has reached 5%.

Reassuring if true — we have warned that the next rate hike could tip markets into bear market territory within a year.

But not every index tracking financial conditions works from the same tool kit.

Let us instead look to Bloomberg’s own financial conditions index — perhaps it draws a darker sketch.

Here, Bloomberg’s own index of financial conditions (unlike the NFCI, the greater the financial ease, the higher the reading): 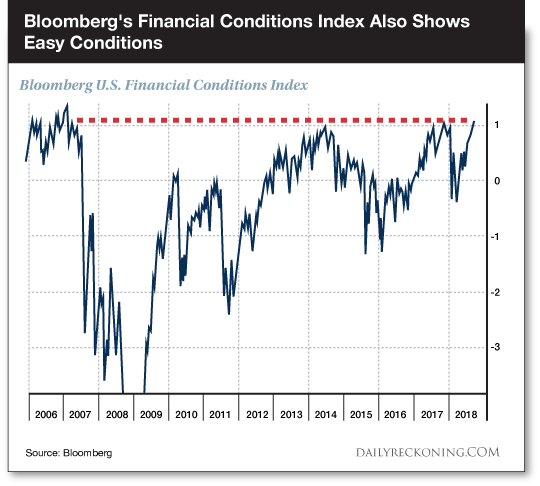 “For some context of just how easy financial conditions are,” says Zero Hedge, “the Bloomberg U.S. Financial Conditions Index… is approaching the highest levels since 2007.”

But perhaps we should turn to a more… authoritative source than Zero Hedge, like the Bank for International Settlements (BIS).

Broad gauges of financial conditions had pointed to an easing since April, after a brief tightening period on the heels of February’s spike in stock market volatility.

“If anything, they eased further” over the past quarter, adds Claudio Borio, head of the BIS’ monetary and economics department.

What does our central bank make of the paradox?

Mona Mahajan, strategist with Allianz, has said previously that the paradox is “puzzling to the Fed.”

But what, may we ask, is not puzzling to the Fed nowadays?

We begin to suspect one plus one might overmatch it… the square root of four might stump it… the number of angles in a triangle might send it to the textbook.

Its beloved Phillips curve — the supposed trade-off between unemployment and inflation — is shipwrecked beyond hope.

And when was the last time anyone called the Federal Reserve chairman “Maestro”?

Despite Fed tightening, trade war panics, raw geopolitical nerves and all of hell’s angels… financial conditions remain as easy as a strumpet’s virtue.

But why so loose?

Household debt has moderated in the last decade, and corporations are awash with cash released by tax reform. So interest rate increases from the Fed may not be having the same dampening effect that they have in the past. Overall, financial conditions have actually gotten easier since the Fed began raising rates in 2015.

We might add that U.S. markets are presently a magnet for global capital fleeing emerging markets.

We must therefore consider the possibility that collapse is not on tap so long as conditions remain so relaxed.

Of course we cannot exclude the possibility of collapse tomorrow, financial conditions be damned — the fear of it haunts our nights.

Thus we waver, indecisively… like the donkey that died of both thirst and starvation standing between a pail of water and a bucket of oats.

As our co-founder Bill Bonner is fond of saying, “Sometimes right, sometimes wrong and always in doubt.”

But doubt, said Descartes, is the origin of wisdom…