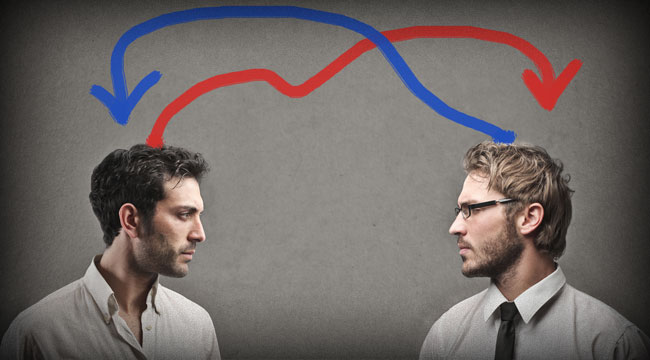 Amid an ongoing decline in the price of gold, a major brawl recently broke out in the elite media over… the gold standard. What is this free-for-all all about? And why does it matter? It matters because… the gold standard finally has demonstrated that, after a long eclipse, it is being taken seriously in elite (if not uniformly polite) company.

And yet, Krugman’s response possessed all the persuasive power of a 14-year-old’s sarcasm: “It’s cranky old man stuff, the kind of thing you get from people who read Investors Business Daily, listen to Rush Limbaugh, and maybe, if they’re unusually teched up, get investment advice from Zero Hedge. Sad.”

Matthew O’Brien of the Atlantic Monthly, playing Robin to Krugman’s Batman, botched a rescue operation. O’Brien got his facts badly wrong and came across as a propagandist, or apologist, rather than a serious analyst. O’Brien concluded, in The Atlantic Monthly, that “The gold standard didn’t save us from dystopia. The gold standard was dystopia.” Wrong. O’Brien was called out by the centrist Bloomberg and the center-right Forbes.com, his reputation bruised, for concocting a counterfactual counter-narrative.

First O’Brien blood was drawn by Matthew C. Klein at Bloomberg, with The Gold Standard Wasn’t So Bad. This was promptly and smartly followed, contradicting without explicitly mentioning O’Brien, again in Bloomberg, with Gold Bugs Had the Best Monetary Rule by Caroline Baum. O’Brien’s total demolition was effected by Forbes.com’s Prof. Brian Domitrovic’s Trashing the Gold Standard Is Now the Stuff of Amateurs and in substance although not by name by Forbes.com’s Nathan Lewis in The Correlation Between the Gold Standard and Stupendous Growth is Clear. Lewis, putting the wooden stake into the undead heart of O’Brien’s thesis:

“Between 1870 and 1912 (the classical gold standard period), a period of forty-two years, industrial production in the United States rose by 682%…

“Today, we live in an environment of floating fiat currencies, which began in 1971. Conventional academic wisdom is that this period has been a wonderful example of how economic management via currency manipulation can solve the terrible problems of the bad old gold standard years.

“How did the United States do in the 42 years of floating fiat currencies, between 1970 and 2012? Industrial production rose by 159% over that time.

Keynes, a pragmatist, would not have let dogma, much less that oxymoron, Keynesian dogma, hobble his intellect in addressing such a deplorable growth rate. Then the left weighed in. Krugman himself got acidly critiqued by the populist progressive Mike Whitney in CounterPunch for blowing his debate with Stockman on This Week:

“People are worried about the debt and deficits and Krugman tries to allay their fears by saying the economic system is too complexified. What the hell does that mean? It’s that Krugman’s elitist way of saying, ‘You dopes can’t possibly understand the economy, so leave it all to us experts.’… And that’s how it ended, with Krugman backing up against the ropes while Stockman delivered one haymaker after another like a windmill spinning in a gale-storm. Mercifully, moderator Stephanopoulos intervened and stopped the carnage, lifting the ex-investment banker’s gloved hand skyward and declaring him ‘This Week’s’ new champ.”

Krugman, apparently trying to recoup from this humiliation (and O’Brien’s fumble) amped it up from his blog to the print edition. In a New York Times op-ed entitled “Lust for Gold.” There Krugman shed even more intellectual integrity, misrepresenting the claims both of gold’s leading proponents and subtly distorting the great Keynes:

“So how can we rationalize the modern goldbug position? Basically, it depends on the claim that runaway inflation is just around the corner.

“Why have so many people found this claim persuasive? John Maynard Keynes famously dismissed the gold standard as a ‘barbarous relic,’ noting the absurdity of yoking the fortunes of a modern industrial society to the supply of a decorative metal. But he also acknowledged that ‘gold has become part of the apparatus of conservatism and is one of the matters which we cannot expect to see handled without prejudice.’”

Prejudice? Krugman demonstrably shows prejudice on both of his key points. The leading proponents of a modern, 21st century, classical gold standard have not, in fact, levied a claim that “runaway inflation is just around the corner.” As Lewis E. Lehrman (with whose Institute this writer has a professional relationship), the eminence grise of the modern classical liberal gold standard, repeatedly has observed that gold demonetized behaves entirely differently from gold legally defining the currency (confounded, further, by the dollar’s status as reserve asset). It is a technical impossibility under this peculiar circumstance to predict the liquidity balances desired by the marketplace itself and, thus, inflation.

The greater poignancy lies in Krugman’s distortion of Keynes. In “Lust for Gold,” he quotes selectively from Keynes’s Auri Sacra Fames, an argument for “Representative Money” as superior to “Commodity Money.” In this work Keynes also states: “Thus gold, originally stationed in heaven with his consort silver, as Sun and Moon, having first doffed his sacred attributes and come to earth as an autocrat, may next descend to the sober status of a constitutional king with a cabinet of Banks; and it may never be necessary to proclaim a Republic. But this is not yet — the evolution may be quite otherwise. The friends of gold will have to be extremely wise and moderate if they are to avoid a Revolution.”

Gold has attracted many distinguished friends, such as Lehrman; such as financier/philanthropist Sean Fieler, head of American Principles in Action (with which this columnist also has a professional relationship); such as publisher Steve Forbes; belle-lettrist James Grant; John Allison, president of the Cato Institute; Seth Lipsky, editor of the New York Sun; Dr. Judy Shelton, of Atlas Economic Research Foundation; and Forbes.com’s own Charles Kadlec and John Tamny, among others, who are proving themselves “wise and moderate” in their gold advocacy.

It may be dawning on Krugman, as hinted at by the slightly less than typically bloodlustful tone of “Lust for Gold,” that he needs to begin to argue his position less cavalierly. Krugman risks losing relevance by attacking a caricature of the gold standard, one that is not actually being promoted in the policy sector. And the repeated and plenary demolition of O’Brien’s arguments should cause all gold standard opponents to be much more scrupulous with actual facts.

The gold standard, if the parity price is set intelligently (and even generously), as it must be, is no “crown of thorns upon labor’s brow.” Workers instinctively grasp this. It is past time for Prof. Krugman, and other elite progressives, to pay closer attention to the actual ongoing debate within this policy arena. It is high time for the left to cease reflexively grandstanding and to offer constructive distinctions about how to configure the ever-more-appealing gold standard the better to generate the kind of massive job growth for which it, repeatedly, has proved instrumental and even indispensable.