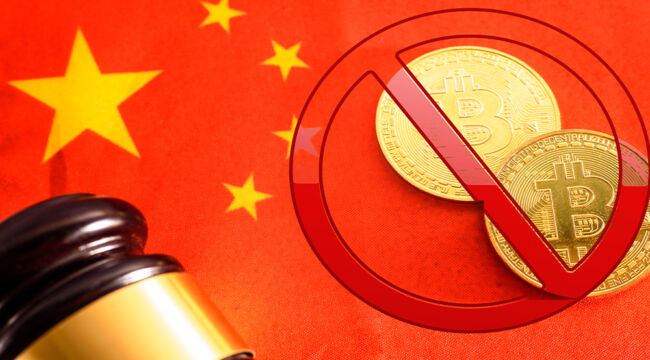 It was another bad day for the stock market today. The major indexes were down big on fears of rising Treasury yields (I don’t believe they’ll continue to rise, but that’s a story for a different day).

Are you thinking of parking your money in cryptocurrencies like Bitcoin as an alternative to stocks?

I’m not here to tell anyone what to do with their money, but you might want to think twice…

China just made cryptocurrencies illegal in the world’s second-largest economy. No transactions in cryptos are to be allowed, nor is cryptocurrency “mining.”

The all-out ban is a departure from China’s previous attempts to simply regulate cryptocurrencies as a means to control them.

The People’s Bank of China (PBOC) said the ban is necessary to “maintain national security and social stability.”

China’s crackdown on cryptos is best understood in the broader context of the rise of central bank digital currencies (CBDCs).

China is very far along in its roll-out of a digital yuan: the Chinese CBDC. China will use the 2022 Winter Olympics in Beijing as a major showcase for this. They will try to cause all transactions for vendors, hotels, tickets, souvenirs, etc., to be conducted in the digital yuan.

The European Central Bank (ECB) is also working on a prototype CBDC, and the Fed is doing research and development work on its own CBDCs, in conjunction with MIT.

So CBDCs are coming fast.

The benefits of CBDCs are obvious, including faster transaction times and lower transaction costs. No more 2.5% merchant acquirer fees for Visa!

But the dark side of CBDCs includes the following: easy to monitor citizens’ whereabouts and buying habits, easy to impose negative interest rates, easy to seize and freeze accounts, etc.

This is why China is pushing so hard on its own CBDC. They want total surveillance of their people. They can then determine if they are buying prohibited books or supporting prohibited causes or traveling to sensitive areas such as Xinjiang.

In a U.S. version of this dystopia, your account might be frozen if you donate to the wrong political causes, groups or “extremist” political candidates (basically, anyone who disagrees with the preferred narrative).

If You Can’t Stop It, Control It

People will seek freedom from this digital-monetary dystopia by going to alternatives. What are they? The answer is cash, gold and cryptos.

Cash is already fighting for its life, thanks to people like Harvard Professor Ken Rogoff and his book The Curse of Cash. Cryptos are next to the guillotine. That’s the way to understand what’s happening in China.

If you want to push CBDCs (and the surveillance that goes with them), you have to eliminate cryptocurrencies first so people have nowhere to hide. Governments may have been planning that all along…

Here’s the thing: Governments don’t want to kill the blockchain; they want to control it.

Governments enjoy a monopoly on money creation, and they’re not about to surrender that monopoly to cryptocurrencies like Bitcoin.

They have sought to do so using powers of regulation, taxation, investigation and ultimately more coercive powers, including arrest and imprisonment of individuals who refuse to obey government mandates with regard to blockchain. That’s what we’re seeing in China today.

Governments, regulators, tax authorities and the global elite are moving in for the crypto-kill. The future of Bitcoin may be a dystopia in which Big Brother controls the blockchain and decides when and how you can buy or sell anything and everything. That’s the logic of CBDCs.

In 1956, Mao Zedong, the leader of the Communist Party of China and China’s dictator, was confronted with demoralized intellectuals and artists who were alienated by Communist rule. As a policy response, he declared a new policy of intellectual freedom.

What came next was no surprise to those familiar with the operation of state power. Once the intellectuals and artists emerged, it was easy for Mao’s secret police to round them up, kill and torture some and send others to “reeducation camps” where they learned ideological conformity.

The Hundred Flowers Movement was a trap for those who placed their trust in the state. It was also a taste of things to come in the form of the much more violent and comprehensive Cultural Revolution of 1966–1976 in which all traces of Chinese bourgeoisie culture and much of China’s historical legacy were eradicated.

Something similar is going on with Bitcoin and distributed ledger technology (DLT) today. Governments have been patiently watching blockchain technology develop and grow outside their control for the past several years.

Libertarian supporters of blockchain celebrate this lack of government control. Yet their celebration has proven to be premature, and their belief in the sustainability of powerful systems outside government control is naive.

Blockchain does not exist in the ether (despite the name of one cryptocurrency), and it does not reside on Mars. Blockchain depends on critical infrastructure, including servers, telecommunications networks, the banking system and the power grid, all of which are subject to government control.

Basically, Big Brother is coming to the blockchain.

Canary in the Coal Mine

China is the canary in the coal mine. The U.S. will not be far behind in strict regulation of cryptocurrencies. The SEC’s Gary Gensler and Treasury Secretary Janet Yellen are already working on it.

With CBDCs as the new world money and cash and cryptos eliminated, gold is the only form of money left if you want to avoid the surveillance state.

The obvious attraction (apart from 5,000 years of history) is that it is nondigital and not issued by central banks. It cannot be hacked, frozen or seized online.

Bottom line: The news from China is the thin end of the wedge. It’s part of a much larger effort to substitute CBDCs for other forms of money.

And that is part of an even larger effort to control dissent and maintain social order. The COVID lockdowns are just one example.

It might be a good idea to buy your gold now… while you still can.