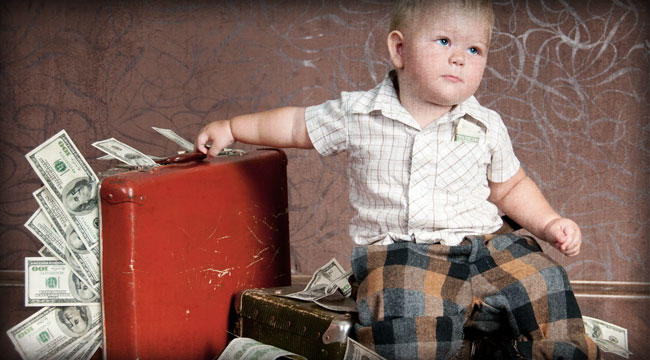 You can’t reduce it to a formula or a simple logical expression. All of life is that way. When you have a political campaign, for example, the most complex issues get reduced to a single phrase, like “Protect freedom.” People need those kinds of things in order to be able to operate. Otherwise, it’s just much, much too complicated to try to figure out how things actually work. And so they end up believing what they want to believe, but what they believe is so far removed from the facts that it’s a delusion.

These delusions don’t all happen in the same way. They’re episodic and cyclical. In one generation, over a period of time, a delusion builds up; it builds up like debt, in fact, until it’s crushed by events. The way our parents and grandparents looked at things is very different from the way we look at them. They had delusions of their own, of course, but their delusions were very, very different.

Our parents did not think that they could live on credit and borrow their way to prosperity; they believed that if they borrowed some money, they’d have to pay it back. I remember how happy my own parents were when they paid off the mortgage. The mortgage they had taken out on our house in the late ’50s was something like $5,000, with a 5% interest rate. And when they paid that mortgage off, they were delighted. But today, people would be delighted to have that mortgage.

My parents were children of the Great Depression and didn’t have the delusion that you can get away with spending more money than you earn. They thought that not spending too much was the way to go, and they thought that savings were important. The delusion of debt had been crushed out of people in the United States in the Great Depression, but gradually it took hold again. And we who grew up after the ’50s and ’60s never had that experience.

So here we are in the 21st century. We’ve never suffered from a real debt deﬂation and we don’t know what it’s like. I think we’re going to find out, but it’s not going to be pretty.

We had an expression in Empire of Debt that basically said that there are not many people who can afford to live like Americans today, and too bad Americans can’t either. The fact is that Americans live beyond their means. This is a very, very old concept, but today people don’t even think about it because they don’t know what their means are.

You know, when you start down this path where you’re introducing so much credit and monetary inﬂation, which just means that there are more and more dollars floating around, then people don’t know what a dollar is worth. For example, when you get a credit card in the mail with a credit line of $2,500, does that mean that you can spend $2,500? As Warren Buffett has explained many times, you can’t live beyond your means forever; eventually, it catches up with you.

What’s happening in America today is that people are taking their credit cards, spending money they don’t have and believing that they’ll never have to pay that money. But they will, somehow, sooner or later. That mathematics has to catch up to them, and they’ll have to spend less money, because they’re right now spending more than they can afford.

Our whole society is in a trap where it is spending more than it can afford and is transferring its assets. Foreigners end up with our money, and they use the money to buy U.S. assets, so Americans become less and less likely to own their own property. And we’ve seen this, of course, in a very fundamental and simple way in the housing market.

People used to own 70% of their homes: 30% was mortgage, 70% was owner equity. And now that figure is down to 52%, meaning that the average American owns barely half of his house. Who owns the other half? Is it the neighborhood bank? No. The neighborhood bank has sold the mortgage to a financial company, which probably sold it to a hedge fund. Now it’s floating somewhere in the great wide world. It may be in the hands of the Chinese financiers or London speculators. Who knows? But it’s just not the world that it once was, and it doesn’t seem fair to me that these poor children coming into the world should come in with so much debt on their shoulders.

Ed. Note: Spending more than you take in cannot last indefinitely. And when it ends it is almost never pleasant. Bill Bonner has been discussing this topic for years in the Daily Reckoning. And early subscribers to the DR have been rewarded handsomely. If you’re not already getting the Daily Reckoning email edition, you’re only getting half the story. Signing up is absolutely free, and it only takes a few seconds. Click here now to sign up for free.